@Mike I think you said that some devices are limited to 48k, but that is not a general limitation of the iOS playback.

However, I get 96k content downsampled to 48k on my Audeze Lightning cable-DAC which is highres capable. Roon knows it is, shows the available rates in device setup. (Btw, what does the yellow color for DSD indicate?) 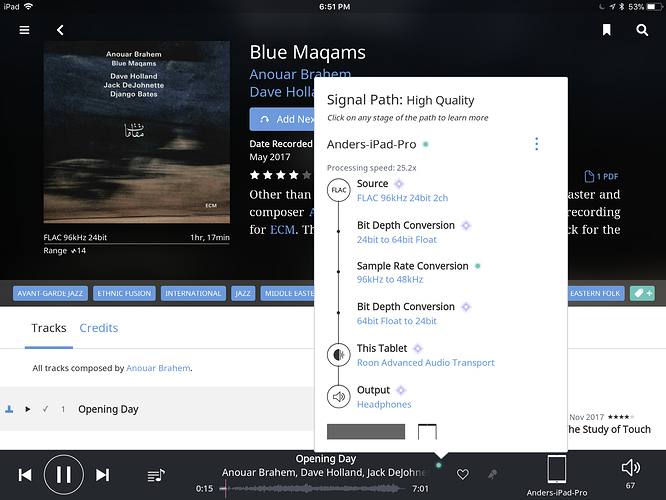 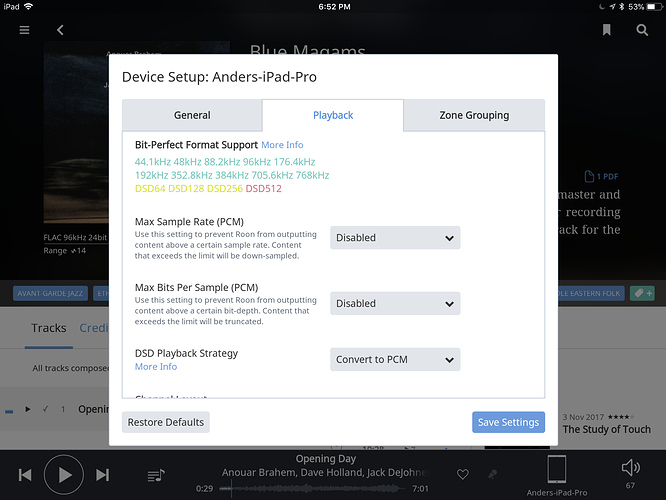 EDIT It also won’t play DSD if I enable DoP, converts to 44k.

Having similar issue w/ down conversions on iPad Pro analog headphone out.

Anders, I’m getting the full 96 from my Dragonfly Red lightning-connected DAC with my iPad, as indicated by both Roon and the indicator light on the Dragonfly.

@Mike Others in this thread confirm that high res output works with other devices.
And I saw the Audeze play 96k through iPeng before (well, I think I did, Roon showed 96k, neither iPeng or the Audeze have indicators).

So in summary, Roon iOS endpoint can play high res, Audeze n iOS can, but not together.
Mysterious.

I will investigate if there is a setting somewhere.
But I get the same result on three devices.

Lightning interface is limited to 48kHz/24bit when used with LAM (Lightning Audio Module), so using Cipher you will not be able to play above 48kHz. This is a limitation of LAM. LAM module is a requirement for MFI certified apple accessories such as Cipher (to allow other integration such as Siri, microphone, volume etc)

However if the lighting port is used to connect via USB to a USB capable DAC (using CCK), you do not have this limitation.

Also note that the DSP in the Cipher is active even when playing Via Roon and depending on the Cipher cable (iSine or Sine/El-8) you do not want to turn on Roon Audeze preset. It will be OK for EL-8 open/closed or Ti and Sine (in which case you will have an extra 3dB base boost on top of the Roon Preset), but not OK to have the Audeze preset on for iSine or LCD-i4 when using the Cipher cable.

I think that is not the case, 44.1 should not be resampled to 48kHz, but I have not been able to verify it.

Just to clarify: I use EL-8 Closed. If I turn on the preset and use the Cipher cable, I get an extra bass boost but otherwise ok? I think I remember you saying the preset does more good stuff?

Yes you are right. If you feel it is a bit boomy, you could add a shelf to cut the bass by -3dB and a -3dB of headroom to avoid any clipping

@mike In case you didn’t see — nevermind, Kman of Audeze explained this is their limitation with Apple.

On my iPhone with the audeze isine10 and the cypher cable a Flac file of 44.khz and 16bit is upsampled to 24bit and 48khz. I didn’t find a way to change this in settings.

I was initially using the Fixed Volume setting in Roon and controlling volune through the Iphone buttons or the Cipher buttons.

I then tried the DSP volume on Roon and set the Iphone volume to max. I assume this means that Iphone/Cipher does no volume processing and passes the signal it gets from Roon. I can adjust the volume through Roon now. The sound does change and the bass clarity has improved. The sound is also brighter (more transparent?) and a bit pushed back. These are my initial impressions and i will listen a bit more to confirm.

Is this the best way to get the most out of the Cipher-Iphone-Roon setup ? Since two volume control options are there, please do confirm which is the best from a signal integrity (bit perfect) point of view, if indeed there is one.

The volume control on the iPhone is changing the analog output level and not a digital volume control. Just like with any other amp, driving the amp with enough headroom provides the least distortion and a more transparent sound. By setting the iPhone volume to max, the amp in the Cipher V2 is setup to its max voltage swing, which is not optimal and also would draw more power from the iPhone. You also run the risk of accidentally playing too loud when not using Roon.

My suggestion is to set the iPhone volume to a click or two above your normal listening level and use Roon to have a fine control over the volume or even try Roon’s auto leveling feature. Also make sure Roon’s audeze preset is not enabled.

Brighter sound can be a result of increased noise, I associate transparency with smoother less fatiguing sound.

I tell Roon to use Device Controls.
This lets me control volume in several places, with exactly the same effect:
With Roon’s slider
With the iPhone/iPad volume buttons
With the buttons on the Cipher cable

And whichever physical control I use, the volume is indicated in Roon, and during the change in the iOS volume indicator pop up.