MQA Finale: Both Anti- and Pro- Forces Have Their Successes and Failure

The irony is, that MQA brings back that analog feel, that illusive connection he is referring to there. It does for me anyway and so many other people who take the time to really listen with MQA. You just appreciate the listening experience so much more.

I was just putting it out there. If people are going to follow what Neil young says then there is a lot of music that needs binning according to that article.

MQA does not charge to encode. It sells decoders. And the first unfold is free

As this is a Roon forum I’m going to point out that on numerous occasions @Danny has said that the first unfold in NOT free. Roon pays MQA a fee for every single first unfold.

My results line up with the results published in Stereophile and this test by archimago .

Can you share a full report for that too, for “completeness”

I’ve been reading this thread for a few days and I’ve been having a good laugh.

What I think is that opinions matter, but only your opinions to you. I don’t care about the opinion(s) that others have because why? Why should I care when at the end of the day the music I listen to is the music I prefer to listen to.

It’s not offensive to have different likes and opinions, that’s what makes us individuals.

I’m so glad I joined the United States Marine Corps in my youth. I can laugh at the hurt feelings because of different opinions. My suggestion would be to grow a pair and carry on with what’s important in your life: Family.

My wife has different taste in music, the only common is that we both love to listen to music specially Depeche Mode. When I buy her or she buys music she doesn’t care about the format, she cares if she can play it so that she can enjoy it. She has her music player (I make sure her music player plays every format available; we don’t only stream) I have my music player, she listens to Spotify and I mostly use Tidal. We have a couple of turntables, a couple of reel to reels, even a cassette player. We have all that just to listen to music. A dedicated music/movie room in our house.

To shun a format because a format provider lies is quite hypocritical, you have to shun them all, they ALL LIE and CONTINUE to LIE. Not just in music, life in general.

Like I said before, grow a pair and Keep on Keeping on cause life is a garden that you have to dig. You’ll know when you’ve dug enough.

Can you share a full report for that too, for “completeness” 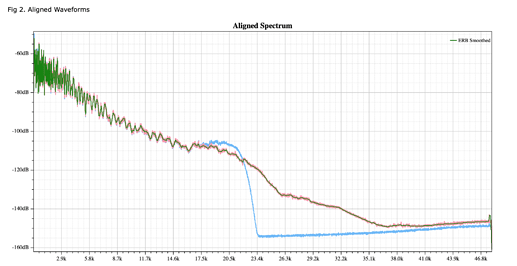 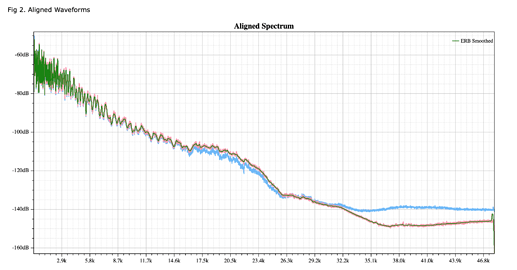 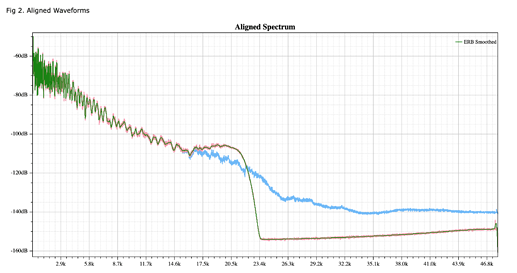 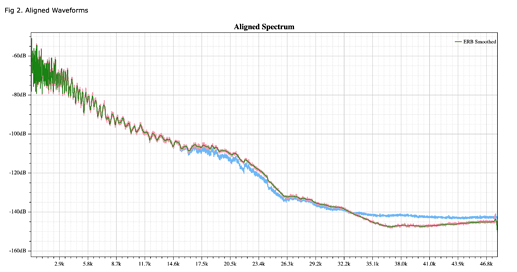 My assumption is that the “hump” in the PCM-CD spectrum is the noise shaped dither applied by 2L to the CD release.

Thanks for setting me straight. I was not aware – but ought to have suspected that some licensing exists for the algorithm…

Or am i missing something else?

Any comments about this one (quoted)?

To shun a format because a format provider lies is quite hypocritical, you have to shun them all, they ALL LIE and CONTINUE to LIE. Not just in music, life in general.

@Maximilian_Carranza: This debate has nothing to do with consumer preference. It has to do with false statements and fraud, and the attempt to use such to impose economic rents on others. Fortunately, again, MQA is now being exposed and Tidal, its main backer, is facing crushing competition.

Separately, the statement above is un-informed and demonstrably untrue. The other formats have open source, fully published codecs.

So, MQA is the only liar. Nobody else has lied ever, nor have they tried to make it proprietary. I see now.

MQA is the devil! – Mama Boucher

Any comments about this one (quoted)?

The most apparent difference is that the PCM-CD recording is lacking any audio content above 22.05kHz. The MQA-CD recording closely tracks the DXD release to about 31kHz or so.

The “hump” you see in the PCM-CD response is likely due to the application of noise-shaped dither to the CD release. If you’re unfamiliar with the concept of dither here’s a decent overview on the subject.

You don’t see the dither “hump” in the MQA-CD recording because the MQA decoder and renderer are using the information buried in the noise floor to reconstruct the higher frequencies from the original DXD release. The output of the MQA decoder is always 88.2kHz or 96kHz in order to push things like signaling noise, aliasing, and dither out of the audible band.

But my point remains unchanged - if you prefer red book - then you can continue to get that without payment to MQA. You pay for the decoding if and only if you prefer it

I don’t think that’s true. Everyone pays for MQA access via Roon whether they listen to MQA or not. It’s part of the subscription price. Roon has the same rate for everyone, not separate rates for those doing the first unfold and those who don’t. I think the same thing is true for those claiming Tidal doesn’t charge anything extra for MQA. Where I am, Tidal is $20 a month and Qobuz is $15. Every subscriber to Tidal pays extra whether they want MQA or not.

Not true as, if you don’t decode MQA in Roon, they pay nothing. The choice is yours to make.

Roon’s prices have remained static for at least the last 5 years which was well prior to MQA rearing its head up at least as far as roon’s decoding and support started working.

this is getting pedantic, considering the concern raised above was, in effect, that MQA had become a music tax. Over and out.

So, MQA is the only liar. Nobody else has lied ever, nor have they tried to make it proprietary. I see now.

MQA is the devil! – Mama Boucher

A straw man (sometimes written as strawman) is a form of argument and an informal fallacy of having the impression of refuting an argument, whereas the real subject of the argument was not addressed or refuted, but instead replaced with a false one. One who engages in this fallacy is said to be "attacking a straw man". The typical straw man argument creates the illusion of having completely refuted or defeated an opponent's proposition through the covert replacement of it with a different propo...

@danny , please correct me if I am wrong. I thought that one of the Roon team had stated once that Roon pays both a flat MQA licensing fee just to incorporate MQA, and then, on top of that, a fee for every time someone uses the core decode feature. Or is the per core decode the only thing you pay MQA? Thanks!

Does anyone know if manufacture and companies like Roon have to pay a license fee to decode DSD? If yes, would this also be considered a music tax?

I don’t think that’s true. Everyone pays for MQA access via Roon/Tidal whether they listen to MQA or not. It’s part of the subscription price.

Afaik Roon pays MQA based on how many times the core decoder is used on a monthly basis. So if a user does not use the MQA core decoder in a given month they do not contribute Roon’s MQA bill.

There’s some fixed costs in there like the initial engineering effort to get it implemented + support, but ultimately offering MQA brings in more subscribers and revenue which can then be used to grow the company or subsidize the addition of other features.

Does anyone know if manufacture and companies like Roon have to pay a license fee to decode DSD? If yes, would this also be considered a music tax?

(Sorry, that is a pedantic dig at one of my pet peeves, the “Does anyone know…?” poorly worded question.)

SDM (sigma delta modulation) on disc is proprietary and is Sony patentable/trademarkable as DSD. But absent the disc, SDM is no more proprietary than PCM is. And bear in mind that most modern DAC chips, regardless of input format, operate internally as SDM.