This was exactly what i was alluding to, Peter. The “lossless” label would define the breach of consumer law or not. It would likely come down to the very source of lossless being assumed as the first digital master used to release to market (physical CD or redbook equivalent). MQA could be said to have exactly that, but only if MQA was used to produce the initial release to market. The technicalities of discarded information could well be treated as moot if they were discarded prior to the point in time the master release is created. Where it is done after the fact e.g. as the creation of a separate, secodary MQA-master using the first digital master, this is a brand new hornet’s nest…

It’s a total mess where countless albums exist, and have digital lossless masters prior to MQA’s existence. The obvious loophole I can see here is going back to the analogue masters and producing an MQA-master from those. I’m not sure if this has ever been done or not - it certainly can’t be the norm due to the pace of converting old releases to MQA and the batch approach of conversion that would be the expected method with such a huge volume of material to get through.

Regarding Tidal’s 3 tier system and the legalities mentioned above, you sign up to any service (Tidal in this case) based on their terms and conditions which lays out what is on offer and what you can expect. So in the case of Tidal, I am signing up to what I consider the superior sound of MQA where it is available. Other will sign up for another tier, but it’s Tidal’s offer, if you don’t like it, don’t buy it. They offer what they offer and it’s up to them.
If a title is removed from the MQA platform for any reason, that will be covered in the terms stated. I just have to accept this. Should I really want a particular recording in a particular format, then it’s up to me to purchase this outright. (That’s what we always used to do anyway) CD’s 4 for £1.00 in charity shops these days…

Streaming is the future, it isn’t perfect, it comes with compromises and fluctuations but it makes music available in quality (MQA or Not) and quantity unknown until recently in the history of recorded music…

Surely you understand what lossless means when it refers to digital files.

I don’t want to start an argument of MQA and it’s sonic output but if they are going to deliver a lossless PCM tier as stated in this marketing then people who just pay for it should get just that (PCM lossless FLAC) not a MQA unflagged variant, Tidals tier change will be in response to Spotify’s lossless package due soon but if they deliver 16/44.1 PCM then Tidal may not be the same, Uk advertising standards agency would have a field day with this type of marketing if they were not delivering it. Tidal need to put back all the Warner’s conversion files to truly claim what it saying on this grid ! 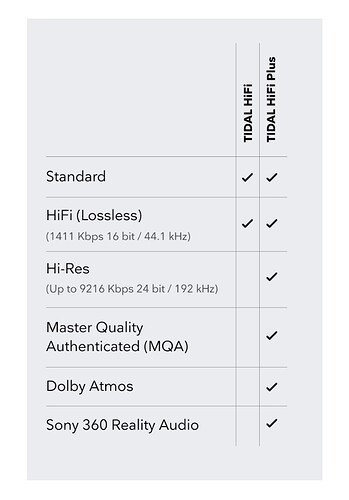 Agreed. If the HiFi (Lossless) tier was genuinely lossless PCM files then everyone wins. I can have my 16/44.1 PCM and MQA adherents can pay more for their MQA files.

As long as they do not offer non-MQA hires FLAC, they will never get me to resubscribe. But I see how the new tier system might appeal to the non-anti-MQA crowd. I pray that my side always has what it needs to happily listen, and the same for the pro-MQA side. And of course, I hope Roon is always around to help both sides reach musical bliss.

I want people to have access to the format they prefer, including PCM / MQA / DSD.

This is the right answer.

Every company is scrambling to provide “lossless” and “HD” and “high resolution” but there is no definition for any of those terms. You, as consumer, might have a definition but there is a really good chance it’s different than what you’re actually buying from the streaming services. And some services stretch this definition much further than others (cough Tidal cough cough Sonos cough).

If you think audio is a mess you should try video. They don’t even use terms like “bit-perfect” because it’s not a thing. There is only 1 streaming service I know of that claims they are streaming a “studio master”. The closest thing you can get in your home is probably Kaleidescape (and they use the term “lossless 3D audio” so try to figure out what format that is).

Anyway, go listen to what makes you happy. Please stop trying to defend any one format (it actually makes you look silly) and just enjoy it. Don’t expect Tidal to stream PCM. For those of us purists… it would be nice to have an alternative in Roon besides Qobuz. Thank you for coming to my Ted Talk.

If you think audio is a mess you should try video.

Other than competing formats (Dolby Vision vs HDR10+, Dolby vs DTS), HDMI 2.1 implementations with non-fixable hardware defects, incomplete implementations that do not fully support the latest features from the latest game consoles, HDMI boards dying prematurely due to overheat, HDMI ARC compatibility issues, one important company in financial trouble and going to be delisted, fake 4K TV panels, cheap non-Netflix certified 4K TV failing to give you Netflix 4K HDR, forced ads in TV, OLED panel burn-in, there is no problem.

That is correct. Even 1080p projection in theaters are lossy (but with a much less loss than your typical Blu-ray or UHD Blu-ray).

Films never been lostless even before it went digital. Film prints had less resolution than your 1080p TV they go through that many stages. Now it’s compressed jpeg2000 images, also a lot of acquisition isnt lossless either but that’s another story.

Actually, there ARE definitions for those terms. The problem is worse than no definitions…it’s conflicting and ambiguous definitions. What we need are unified definitions that are easy to understand by everyone.

What standards body and/or association/organization do you get your definitions from?

Every single association and organization there is, than is why I said the definitions are ambiguous and conflicting, and need to be unified. Definitions on Stereophile differ from those on The Absolute Sound which differ from those on What Hi Fi, etc., etc. etc. sometimes they slightly differ, sometimes drastically. And when it comes to definitions, they is no such thing as a single standards body.

Yeah, none of those are recognized as standards bodies.

Probably the closest thing we have is “hi-res audio” and its little sticker which is pretty universally accepted as anything capable of a bitdepth/resolution greater than 16/44.1. But that’s it. Says nothing about lossless (in fact, very much the opposite, see LDAC which is tagged by Sony as a hi-res audio codec and is very much lossy).

I think I’m going to disable Tidal this weekend and only stream Qobuz for a while. I am fairly certain I won’t miss Tidal. When given a choice I choose to put the Qobuz version in my library. It’s rare that I only see Tidal when I look at versions. I’ve also noticed that Qobuz frequently has higher res as well.

Are you getting any support and feedback from any SBAF Australian members yet, @crenca?

It would be good to confirm what people are, and are not getting.

Clarity will enable informed choice; this is not intended to denigrate any format, I happen to agree with @wklie when he says all he wants is for people to have access to their format of choice.

I know there are some out there that just fog-horn their listening habits, proclaiming superiority of one format or another to anyone listening in order to sway the argument (the mute user function has been handy here). This is not about the superiority of format over another, it’s about choice and identifying ethical commercial practices (or not). We owe it to ourselves to get the facts out into the light.

I’m not sure hi-res audio means anything beyond the marketing world, but this paper is interesting:

“… the most likely issues are the anti-alias and anti-imaging filtering chains used to implement classic Shannon sampling.”

Which might be taken to mean we’ve been doing pcm ‘wrong’ for always, and undermines the ‘I want the master pcm because it’s perfect’ position a little.

Or maybe I’m reading out of context. Remember - it’s always more complicated than you imagine.

Folks here may be interested to read Neil Young’s recent book " To Feel the Music: A Songwriter’s Mission to Save High-Quality Audio"

Haha… It doesn’t matter what changes Tidal makes. After having Tidal since it first came out, I cancelled it a few days ago.

I was tired of Tidal not sounding nearly as good as Qobuz, and was tired of them shoving stupid MQA in my face every chance they got.

I have played several albums on Tidal that claimed they were the “original” non-MQA versions only to look down and my SMSL M400 DAC to see that it was getting an MQA signal. Hence why I said above that Tidal is shoving MQA in your face.

That’s not to mention all of the other shady BS Tidal has been doing with MQA. And the fact that Tidal sounds nowhere near as good as Qobuz.

I’ve been using Tidal and Qobuz side by side for a little over a year now, thinking that I would keep Tidal just in case Qobuz didn’t have a particular album. Over the past year, I only came across two albums that Tidal has and Qobuz doesn’t. One of them Qobuz finally got, the other I won’t miss as I didn’t listen to it but maybe twice.

Plus there’s been rumors that Square, who just bought out Tidal, might shut down Tidal after a while. So who knows there.

No… I’ll proudly keep my Qobuz and very proudly ditch Tidal. I also have Amazon Prime and Spotify, so I have options with Amazon HD and Spotify HiFi when it’s available as well.

To be honest anything that takes the edge off Neil Young’s voice is fine by me. In fact mono am radio is best for him in my opinion, preferably in a car doing 70 with the roof down.