Well, @danny spoke of “broken MQA” a couple of days ago, and i assume he was referring to MQA content with the signalling for MQA removed somehow…

Qobuz does, with just a few exceptions, where that one record label only supplies an MQA version. The difference being Qobuz gives you what the record company/studio supplies, and doesn’t put MQA in between themselves like what Tidal does.

The treacherous path (a quote from the fellow who submitted the question to Paul). We’ll have to wait and see exactly what Tidal does in regards to the source files. But it LOOKS like this is simply a pricing structure change, not actually offering the lossless files again.

There are some instances where an album is shown on Tidal twice, one in MQA and one without. And in these instances, you USUALLY can pick the non-master one and stream lossless.
But so far in every instance i’ve tested, any track/album marked as “Master”, you CANNOT stream a lossless version no matter what.

This includes the tracks I published, as well as a few artists I’ve spoken to that have provided me with masters for their tracks.
In most cases, they match the ones on qobuz/amazon HD/Deezer (though deezer has no exclusive mode and requires third party tweaks to get bitperfect output), but they do NOT match the ones on Tidal that are marked “Master”.

Let’s take Biffy clyro’s “Many of Horror” as a quick test here.

First, we compare the tracks streamed from the “Hifi” tier and “Master” tier: 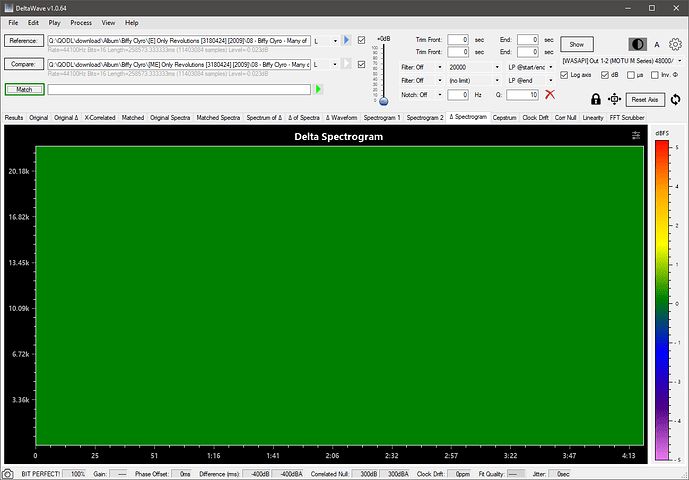 Absolutely bitperfect. They are the same file.

Then let’s compare the “Hifi” version which is supposedly lossless, to the Qobuz version: 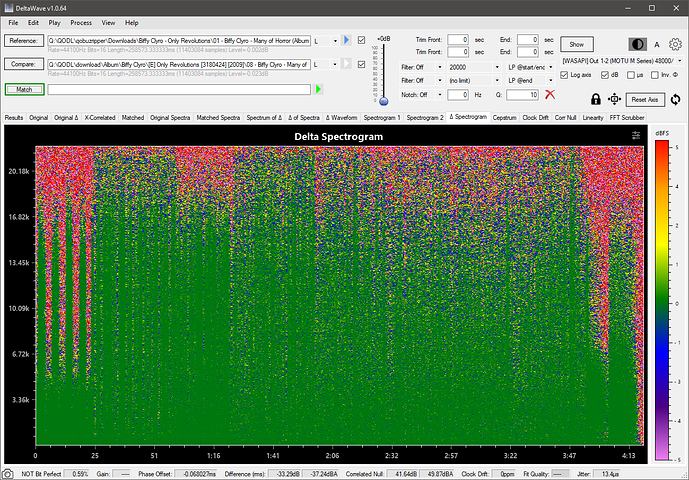 Ok, let’s check one where I have the original master: Suijin - Zenso 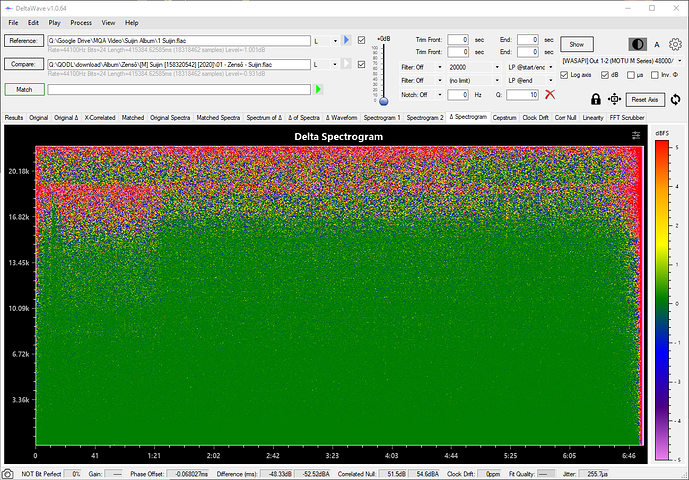 No, not the same.
What about the Hifi version? 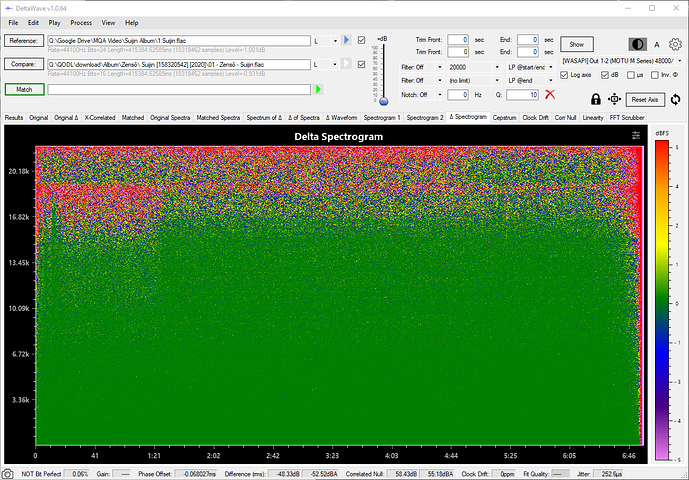 No, not the same. So you cannot actually stream this track losslessly from Tidal!
Lastly let’s again check the MQA vs Hifi version: 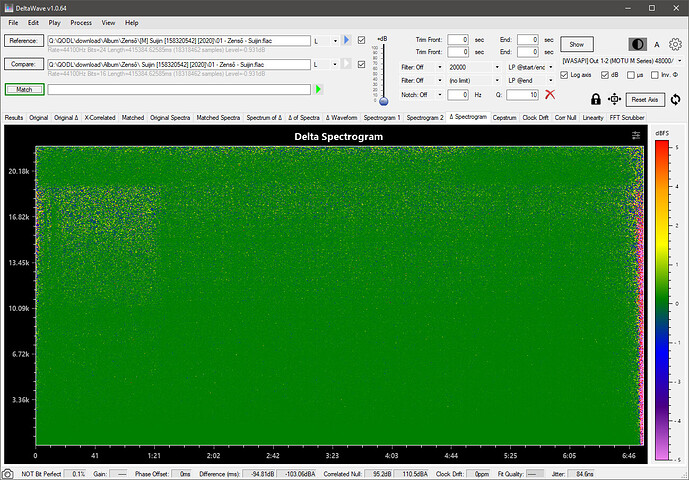 Not identical, but VERY close, differences here are most likely just the result of dithering/truncation from 24 to 16 bit.
(Oh and by the way MQA still “unfolds” this track even though the master was 44.1khz)

And for both of these tracks/albums, there is no non-master version on Tidal. Meaning you have absolutely no way of streaming lossless and are forced to use MQA whether you like it or not.

I REALLY hope Tidal changes this because right now this description in various places in their marketing is a straight up lie: 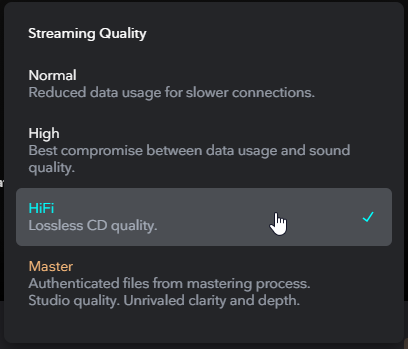 If MQA sources are used for the standard HI Fi tier, you will still get better sound than CD offerings…

No you will not.
MQA releases are effectively just regular releases that have had black-box DSP applied.

There is absolutely no evidence that MQA offers an improvement for HiRes sources let alone standard redbook.
And plenty that shows all sorts of issues.

More to the point, even if it DID provide a benefit, it should be a choice. It should not be mandatory.

Well, I will disagree with you on this and you have a choice… Use Spotify or Apple, there are plenty of other services that do not use MQA. This is regularly pointed out to show MQA failing.
Plenty of choice out there, always has been, always will be.

There is some choice, but apple, spotify, deezer etc are not equal choices as they have various shortcomings such as no lossless streaming, no exclusive mode output, and no roon support (though that’s of course an issue specific to us here and not general users).

The only one that works is Qobuz and that has a limited library.
But yes, we do have a choice which is why I and many others have cancelled our Tidal subscriptions. Why support a company that lies to their customers?

If Tidal simply offered lossless streaming, the one thing they built their business on, then they would be the obvious choice.
But unfortunately right now that’s not the case

The new tiers are interesting, if the middle HiFi actually gives you true lossless non-MQA 16/44.1. Only time will show. In the meantime, I’m testing Qobuz since it just came to Norway, but Tidal’s library is better for me - even if I have found some albums only on Qobuz.

Yes, there are plenty of choice, but not that works with Roon, which is the reason most of us are here.

I’m not against MQA. My ears does not hear anything wrong with MQA with my music and setup.

I just want another product.

Precisely why I won’t listen to anything from 2L. They waste all of that effort to make quality recordings only to totally ruin them with MQA.

With the music i listen to I have not run into any MQA on Qobuz. Must be classical label?

But punters are not buying into that. lossless should be16bit PCM not 15bit with metadata, that’s what Tidal say they will get for the price and that’s what other sites offer, it seems to me the platform isn’t changing just the cost

Punters just want to hear great music, that’s what MQA delivers, and more and more of them have MQA DAC’s The tide of quality is finally going upwards for all now… Ain’t it great…

I keep wondering how many times it will take before people understand that 16b MQA is not “15b with metadata”. Burying of low frequency data into dither affecting the 16th bit doesn’t take away from the signal’s resolution. Somewhere, Bob Stuart mentioned that the average resolution is 15.95b. (MQA uses fractional bit dither). That’s better than most PCM files do, because unlike MQA, they don’t use subtractive dither.

MQA content with the signalling for MQA removed somehow

Whatever the argument for the quality of the file Tidal doesn’t deliver what they say hifi is not lossless CD quality, if they change that to 16 bit MQA on the software and stop marketing it as PCM then I’m sure everyone will be able to make a un biased decision on what they are buying into