I’m sure Roon tested it in some way prior to release. Hopefully more calls to Oppo by Roon users might make it happen sooner rather than later.

[quote=“rrwwss52, post:59, topic:30847”]
Hopefully more calls to Oppo by Roon users might make it happen sooner rather than later.[/quote] Yes, they are looking into it but the calls might accelerate the effort.

Multichannel would be great!

Can anyone confirm if it is possible to send oppo native dsd 64 or 128 via RAAT. 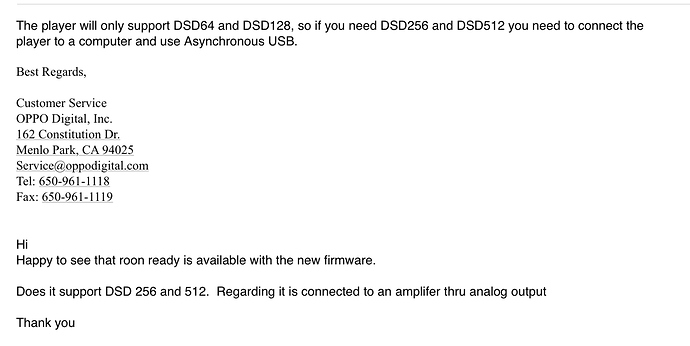 That settles it. I’m buying one.

The official message from Oppo we were instructed to give when this multichannel limitation comes up:

Due to technical limitations within these products, the audio interface available to the RAAT firmware is unable to support DSD or multichannel playback.

OPPO is investigating a path forward, but as of now, we don’t know if or when these limitations will be bypassed.

Yeah. Kinda sucks since multichannel playback would have made the Oppos the least expensive, high quality multichannel DACs on the market.

[quote=“mitr, post:65, topic:30847”]
Kinda sucks …
[/quote]Yep, I was waiting for this Roon Ready update, but without RAAT multichannel support the Oppo is off my to buy list.

Here’s a logistical question: some of those pretty screen shots are presumably of the video output from the Oppo. I use a projector for my video display and am not about to fire it up to listen to music. Is there any way of selecting Ethernet as an audio input on the Oppo? Ideally I would like a discrete remote command I could program into my Harmony remote as part of an “activity”. I’m almost certain such a command would be available in RS-232 but that would probably require extra hardware, and some code. I know I could select the source using the OSD as with my 95 but that would be a huge pain (and is the reason I have never seriously used the 95 as a network music player).

Once I set up the activity and select music on my iPad I like that I could use the remote to pause, fast forward, skip, etc. which seems to be the case.

By DSD do you mean multichannel DSD ? Or does it mean that it also doesnt support any DSD including DSD64 stereo

Correct. The device’s subsystem that handles the RAAT networking stuff has no way to communicate DSD streams or multichannel to the rest of the system. The USB/HDMI stuff has no such limitation in their platform.

We tried to get this limitation resolved during certification, but it was not possible. They are still investigating this for a possible future release, but no ETA on that.

I realize that while this is not ideal, the work done here and the Roon Ready support is a nice freebie for you Oppo owners.

Correct. The device’s subsystem that handles the RAAT networking stuff has no way to communicate DSD streams or multichannel to the rest of the system. The USB/HDMI stuff has no such limitation in their platform.

Too bad. I am not advocating this (there are other issues) but one can play DSD and/or multichannel to the Oppo via ethernet/DLNA (not just USB/HDMI) from other sources.

yah , that’s an unfortunate situation that is far too common. UPnP stuff is file/song oriented with well defined boundaries and not a gapless stream, so sometimes “file” stuff can be easier to handle.

The Oppo accesses the network via ethernet, and wi-fi, both inside of Roon, and using DLNA. Below is a link, check the section under UNIVERSAL DISC AND FILE PLAYBACK, - it’s on the far right column.

Based in the heart of Silicon Valley, OPPO Digital designs and markets high quality digital electronics that deliver style, performance, innovation, and value to A/V enthusiasts and savvy consumers alike. The company's attention to core product...

Nobody seems to understand my question (or it got mixed in with the DSD thread): if I want to play audio (other than from a CD/SACD/DVD-A) but have no active video display, is it possible, and how? Specifically, if I play something from Roon with the Oppo selected as a zone will it just play or do I need to do something to the Oppo, like select an “input”? For example, in my current setup if I have my Benchmark DAC1 PRE connected to a USB port on a computer on the network Roon sees it as an endpoint, but I have to do something else, select the USB input. With the Benchmark it’s easy to set up a macro on a universal remote because each input has a discrete IR command (as well as a rotary encoder I can just point to the source on the Benchmark chassis).

Specifically, if I play something from Roon with the Oppo selected as a zone will it just play or do I need to do something to the Oppo, like select an “input”?

As per the Oppo’s manual, can’t you press HOME on the remote and then use up/down or left/right to then select NETWORK and then Roon should see your Oppo?

Probably would want to use a TV to set up the Oppo, but you can control functions easily with a tablet (Roon Remote) and hook the Oppo outputs to your preamp or DAC.

I am using my Oppo UDP-203 at the moment toslink out to a Schiit Gumby and onto my integrated amp. TV is not necessary, but nice to see the title info displayed.

With no disc inserted, the OPPO automatically switches to the network input and plays from Roon. No user intervention necessary.

When I am playing a CD and start playing a Roon track from my PC, the Oppo stops playing the CD and automatically switches to Roon. Pretty cool.

So, there you have it. The network input takes priority over the disc drive.

Even without DSD or multichannel, the OPPO UDPs in one stroke of a firmware update have leaped to the top of the most cost effective and versatile Roon endpoints – because they can play most any of your physical disc media, too, from UHD to SACD. Already, I find myself leaving my Mac mini HQPlayer and RoonBridge endpoint asleep and going for the direct component simplicity of the OPPO.