Possible to use ROCK just as a MCH Endpoint?

I see a number of folks looking for a low-cost Roon Endpoint that supports multichannel; e.g. this thread:

Is there an endpoint - preferably under $500 - that can play multichannel FLAC 5.1 files? Thanks!

The sticking point seems to be that, so far, it’s not possible to get multichannel out of a Raspberry Pi via the HDMI connector, so the fallback position seems to be to use a barebones PC running Windows. In the interest of getting closer to the “Roon appliance” ideal, has anyone tried installing ROCK on a NUC or similar barebones PC, and just using the Output function?

I’m assuming that this will work, even though the Core function of ROCK will be present and running. However, since the licensed Core would be elsewhere in the network, this shouldn’t cause any problems, right?

I guess this should work OK. Here’s ROCK presenting its outputs to my regular Linux Core: 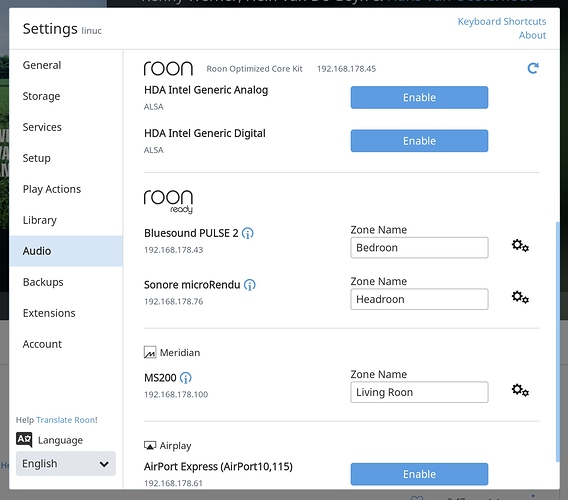 Not 100% sure what happens if ROCK is not licensed/activated, but it I think it would not matter for exposed endpoints.

Thanks Rene, for folks comfortable with Linux distros and the like, this is the natural route. Perhaps there’s not much in it, but I was trying to simplify the DIY effort even further.

I’m intrigued by your screenshot - your ROCK shows just two hardware devices; mine shows four: one analog and three HDMI. What hardware is your ROCK installed on? Mine is on an Intel NUC.

It’s in a VirtualBox VM, just to keep up with the Joneses…

I’ve had rock running on a non NUC (mock) and I think it supported hdmi output too, but now with dietpi amd64 running on it it too presents hdmi outputs too. It’s running roon server under dietpi. I haven’t tried it with MCH tho, but the install is not so easy like ROCK on a NUC. 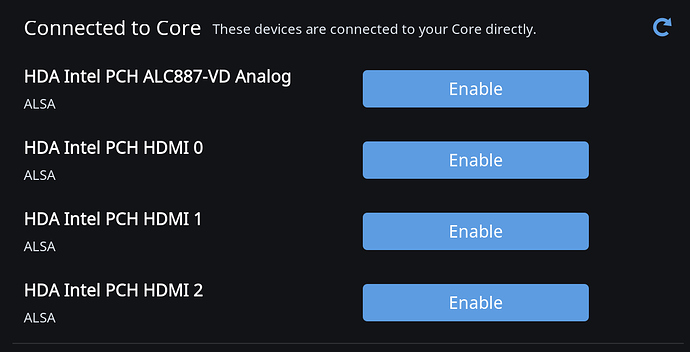 So what’s the conclusion?

I’m not exactly sure what is being asked here, but I routinely use the HDMI output of my fanless NUC to listen to multichannel audio, with the NUC feeding an HDMI input on my audio processor.

What I’m asking is whether it is possible to have (in effect) two ROCK instances running in a network; one being the licensed Core, the other being unlicensed, and simply being used as a multichannel endpoint… I’m assuming that it is possible, but has anyone actually got this situation in real life?

That I don’t know. I suspect that the Roon folks know. Not sure why they haven’t answered.

I have two instances of ROCK running but for 2 channel use only. The one on a low powered single core NUC has to be updated manually and isn’t pointed at anything or logged in to Tidal. With no database it runs just fine for endpoint playback and is my favourite endpoint. Specs are: DE3815TYBE, 4 gig RAM and a 32gig SATA DOM. It isn’t the cheapest solution but it gives you all of the benefits of ROCK as a playback device without the additional burden of the processing, noise or heat. I have always thought the NUC in question would be ideal for an official Roon endpoint in the same vein as Nucleus. And that NUC is still in support by Intel.