Remove “In Their Prime” -- it' ageist, insulting to the artist and ridiculously subjective [not on roadmap]

Would either of these artists agree with Roon that their prime ended in 1981 and 1979 respectively? I don’t think so and I think they would be deeply offended.

Your case was excluding a couple years on one end of the defined prime period.

I expect a first gen AI feature to not be perfect, but just the fact it’s there - not just for artists from 30-50 years ago - and working properly with some bands from the 90’s and 00’s makes me feel like this was executed fairly well for the purposes of introducing someone to an artist.

I think the real issue may be that Roon has little control over this because it’s pulling from the streaming services’ definitions of these periods and albums. And that’s a larger issue that rubs me wrong about Valence.

I have the distinct impression it is not Roon intelligently analyzing content in your library so much as matching it to the definitions held by their streaming partners. How intelligent is Roon at learning from my library and our libraries in totality? That’s never really been explained in much depth.

Your case was excluding a couple years on one end of the defined prime period.

No, my case was excluding the one album that every reviewer (including the one writing the Sonic Youth bio on the Roon artist page) and fan agrees is the best and most important one, from the “prime years”. The album that the US Library of Congress chose to be preserved in the National Recording Registry.

And that’s because I noticed because I know the band. When using the feature to explore artists I do not know, which is its intended purpose, I would not even be aware of the misinformation. Which diminishes the value of a feature that in principle could be very useful.

I agree with everything else you wrote in this post

Too subjective? These features are entirely subjective by nature. And in this case it’s way out of view. Pretty easy to ignore the subjective stuff in Roon isn’t it? I don’t really see any of it besides recommendations on the album page if I’m sticking to albums/tracks/bookmarked views

We are open to suggestions for renaming it, but as for removing the feature, it’s not going to happen.

I personally love this feature as it tells me what to try out when I come across an artist that I don’t know, but am intrigued due to 1 song (usually given to me by Roon Radio).

As for being too “subjective”, I’m curious what/whose personal feelings, tastes, or opinions are being used to influence the years given?

I love this feature too, so glad to hear it is staying.

I am not offended by the current label for this feature, but suggest you don’t rename it “In Their Golden Years”.

as it tells me what to try out when I come across an artist that I don’t know, but am intrigued due to 1 song (

Very much agree - if I can rely on the information being accurate or at least not misleading. If I can never be sure (and unfortunately it does not take much to do that), then it’s a problem. Obviously it should not be removed, and it could indeed be useful, if improved. If it works as the name suggests, the name is IMHO also fine

I think there are some lessons in my Sonic Youth case (sorry for repeating, it is simply because I know my way around them):

How do you get to the ‘In Their Prime’ screen? I haven’t been able to find i

Find an important artist, but the feature is not there for every one. Go to the artist page, scroll down. E.g. Neil Young has one

It’s on the Artist Overview screen, but it is not visible for all artists. Generally the more prolific artists will have an “In Their Prime” section. David Bowie is one example where you will find it.

Thanks! I was looking for it among the more obscure artists in my collection.

These responses highlight the problem with Valence in general. Many users don’t see this because they can’t and all the streaming folk assume everyone else gets that info

Thanks! I was looking for it among the more obscure artists in my collection.

I am allowing Valance more time for this

It would be very useful if it worked for those, too, but obviously it will need the metadata to exist, and sufficient input by user statistics. And more things that I am not aware of. So for the time being it’s probably too much to ask.

We are open to suggestions for renaming it

if I can rely on the information being accurate or at least not misleading. If I can never be sure (and unfortunately it does not take much to do that), then it’s a problem

I personally disagree with what Valence comes up with for Faith No More, because I feel the band had their prime for only 2 albums (ending with Angel Dust) – but I know people who feel otherwise… but whatever, if I didn’t know Faith No More at all, it’d be a reasonable prime…

There are without doubt many gray areas and one should not put a too fine point on it, I agree. Mine was just a very obvious example where it is simply wrong. In this particular case it is not a question of taste. I am sure if Prime omitted Beethoven’s fifth you would also agree, same thing.

It is understandable if the technology cannot deliver (yet) on what the name suggests, in this case a different name might be a good idea. Or maybe better, if it could give some insight into what it really represents. If it said, e.g. “best-selling albums”, I would not have had any issue with it.
Because then I would know what to expect when exploring artists I am not familiar with

If it said, e.g. “best-selling albums”, I would not have had any issue with it.

I would because that would clearly be incorrect. Not all output during these prolific periods were best sellers. Indeed some exceptional albums were commercial failures when released.

Indeed I really have no problem with ‘In Their Prime’ since the definition is pretty clear and unambiguous in British English. It’s neither ageist nor insulting — how does this stereotype or discriminate?

Maybe something is lost in translation or the phrase has different meaning in different countries? I don’t know.

What I do know is that Seasick Steve had his most successful period during his 50s and 60s. And Nick Drake was taken from us in his prime.

I know Sonic Youth a bit… mostly due to obsessed ex-gf… I’ve seen them in person two or three times, and chatted with some band members at parties over the years.

Their “Prime” as per Valence seems to be right to me now… clearly Valence is learning. We did nothing here specifically: 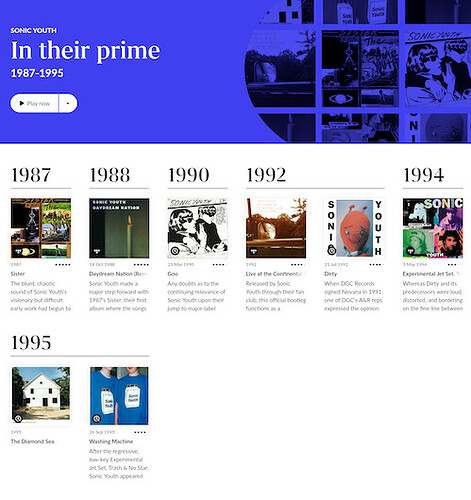 Are you seeing otherwise?

You definitely need to rename it. The opposite of “in their prime” is “over the hill” which is what Roon is sadly implying by the current name for those years outside the prime year period.

I have not looked at too many artists that have “in their prime” but for example with Miles Davis you could have instead of a category of “in their prime” something as follows for the introductory listener:

Right now with your current approach, a new listener would miss the entire fusion years of Miles Davis if they only relied on the prime years as a guide. The fusion years are considered very valuable by jazz historians and quite rewarding and exciting.

As another example with George Benson you could have:

Right now a new listener would both miss Benson’s early pure jazz era and a revisit to straight ahead jazz era based upon the years covered of the “prime.” Both of these eras have been critically praised and give rewarding listening.

With the band Santana you basically negate their entire existence with a “prime” so minimal. Rather than have a “prime” that does Santana a disservice how about an entry called “the popular original band members” so a new listener can go and discover the band’s origins.

This approach gives the new listener a better roadmap and avoids the pitfalls mentioned herein throughout.

Of course you need to know your music to do this rather than just slap on a subjective prime period, but isn’t this what we are paying Roon for in the first place.

I have a friend… he loves 90s music… mostly hard rock and some metal. He’s here on the forum and I’m not going to call him out, but there’s a funny thing about his music library: it filled with tons of bad albums from great bands.

As a teenager and in his early 20s as a PhD student (in the 2000s), his budget did not allow him to buy tons of music (this is all pre-streaming) and he absolutely refused to pirate anything. So, when he heard about a good band, he went out and picked an album. If he picked a great album, he’d consume more by that band until he hit a bad one. If he picked a bad album, he’d be “done” with that artist. This library is FILLED with singular bad albums by great bands.

If he had this “In their prime” feature, he would have far fewer poor experiences with bands he learned about and he would understand why hundreds of artists are much better than the bad album he picked.

You can keep coming up with counter examples with bands you know very well, but the feature is not meant to solve a problem, not be an opinion in itself.