+1 for apparent randomness. Perhaps at some point it chooses randomness over silence. J

So far I have not seen any clue that influencers, followers or any other metadata is involved in the algorithm

Are the tracks and/or albums you’re using as seed content Identified or Unidentified within Roon?

Yes they are identified. I think the problem might be to less metadata. Last half hour I have listened to radio with similars to Versus from Wolf+Lamb witch has only a Roon tag “electronic” first thing that was played after the album was Bob Dylan, next The Waterboys, then Rubin Steiner and as fourth the first “electronic” song from Kruder&Dorfmeister. But after that it went on to Billy Idol.

Funny thing is when I start radio manually from a song on the album Roon stays very narrow focussed to electronic. I think it’s time to force a library rescan.

i’m having problems with Radio in 1.4 as well. in previous versions, the problem seemed to be a lack of “randomness”, where as now the issue is the algorithm seems to relay entirely on randomness, often queuing tracks that appear to have no obvious correlation to one another. a examples:

I started this session with John Pizzarelli plays McCartney from Tidal (i added it to my library). Roon followed this with “Sex Machine” by Sly Stone, and then something from Miles’ 2nd quintet period: 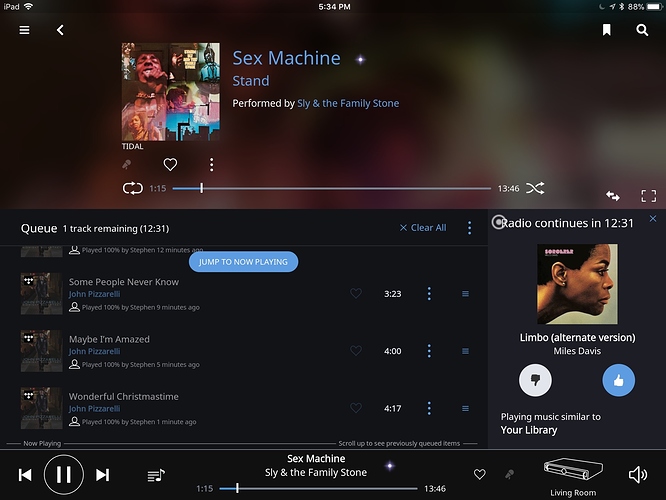 Roon says it’s playing music similar to “my library”, which seems to indicate it’s look at the entire library, rather than any unique characteristics of John Pizzarelli, swing, vocal jazz, or paul mccartney.

in the next example, Roon has follow Iron & Wine, which might be characterized as progressive folk, with a live CSN track, and then the Stones. 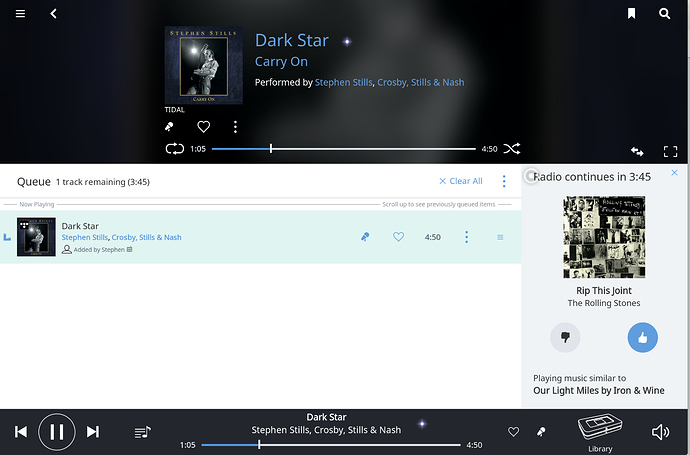 i understand Classical can be difficult to get right, but the selections here, while interesting don’t really fit. the “seed” is a Haydn Trumpet concerto. Bach’s Solo violin music is at least nominally from the same period, but Mahler’s 9th symphony is not. 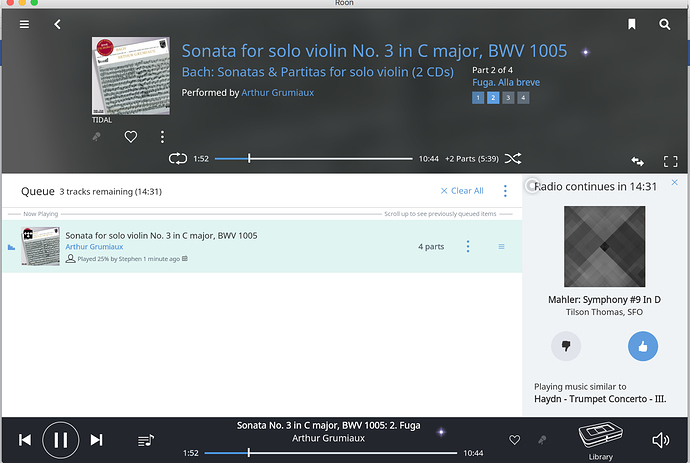 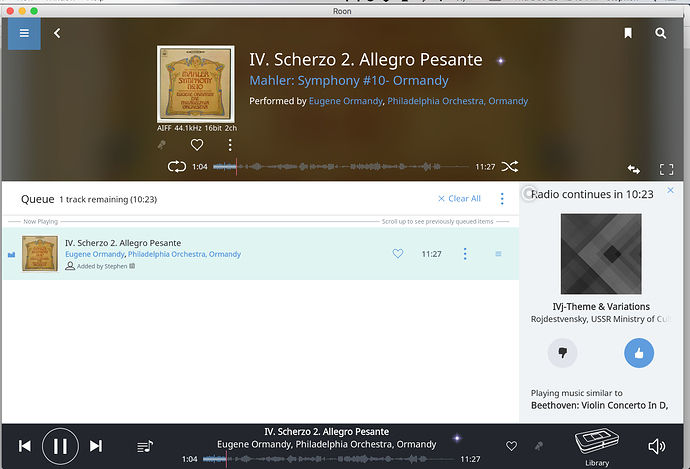 @support what can be done to fix this?

I, too, was excited to hear that Roon Radio had been improved. I’ve missed Pandora since I ditched it to go all-in for Roon.

This morning I started radio with an REM song, and within six tunes I had gotten the Eagles and Cannonball Adderly playing “Autumn Leaves.”

Hey folks – thanks for all the feedback here. We have done a lot of work to improve Radio, but we know there is more to do, and the feature is built to continually improve over time.

I’d like to get some more information about the selections being reported here, but first a couple points I want to make:

Having said all of that, I’d like to understand a bit more about what everyone is experiencing here. More information will be helpful.

For any selections that seem off, can you guys get me:

We appreciate all this feedback,and we look forward to improving the selections Radio makes over the coming days, months, and years.

If Roon says it’s playing music similar to “Your Library” you can expect random playback. It’s not clear to me how @woodford got into this state, but the most obvious way would be starting Radio from one of the browser screens.

This is what happened! I started radio from a Tidal track not in my library, and ended up on Full Hard Drive Shuffle. Thanks for the clarification.

Today I started with a song in my library, and I’m getting a nice radio station out of it. Alas, though, it’s pulling selections only from my hard drive, nothing from the greater world of Tidal, which is my hope for Radio.

Hi Mike, thanks for looking into it.
First of all let me state that I don’t have any problems with radio, someone named this topic that way.
(I have just changed the name of the topic to a more appropriate title)

In answer to your question,

Strangly enough, just tried the same with another album “Suck On This (Mixtape)” from Die Antwoord wich also doesn’t have any genre tags but radio plays mostly hiphop afterwards wich feels right. So I’m afraid it will take a while to figure out when it goes wrong and when it does it right.

I must mention that I have rescanned my complete library some days ago and radio seems to be working much better now, don’t know why but it does.

Hi @mike, thanks for the follow up. sometimes, but not always, this is the result of starting with a Tidal based seed. my typical behavior is the start playing an album from Tidal, and if i like it, then add it to my library while it is playing. is it expected than Radio would fail under this scenario? there may still be 5-10 tracks of an album left to play at the time it’s added to my library- that was the case in the John Pizzarelli example above.

my library is extremely diverse, with a ton of opera and classical, jazz of all types, and a lot of rock, americana, and country. i’d rather have no results than have the system pick randomly from my library. with a Tidal seed, is there a way to limit radio to the genre of the last track/album?

wrt Genres, i have tried both ways, using Roon’s genres and my own. i’ve just reverted to mine, since there are some places i disagree with how Roon characterizes a Genre, and there are others where there does not appear to be applicable Genre.

two examples: Roon lists Americana as a sub-genre of Country. I think it belongs in Rock, or somehow correlated to Country Rock.

and I have a Genre called Classical: Instrumental, for piano recitals, solo violin sonatas, the bach cello suites, etc. the closest Roon equivalent would be Chamber Music. I also have a Classical: Chamber genre, but reserve this for string quartets, quintets, piano quartets, trios, etc.

Not able to take screenshots at the moment but just started radio from a song called humming bees from aditya, best described as Indian electronic music and radio went all over the place but found out the song is on a compilation album with the following tags, Bollywood, Country, Electro, Electronic, Jazz and World. No that’s asking for trouble. This afternoon it hapoened twice that radio started after a song but shiwed as playing similar to your library. Excuse me fir not constantly being 100% focussed on it so I don’t know what started it.

Since v1.4 the selection of music in Radio has been very strange. I just played an album of Baroque vocal music (From Monteverdi to Handel sung by Sara Mingardo) from Tidal. When completed, Radio then selected a jazz vocal track by Patricia Barber, followed by the Dvorak Cello Concerto played by Rostropovich. Next up is ‘Gentle Blues’, acoustic jazz by the Tsuyoshi Yamamoto Trio to be followed by Santana! Maybe there is a connection between these selections but it is not immediately apparent - from this listeners perspective it is annoyingly erratic.

I have noticed this behaviour several times. Prior to v1.4 the music selected by Radio remained more consistent with the initial music style. Have others experienced this problem?

Thanks for the feedback @John_Tunley – we are gathering feedback on Radio and the selections will continue to improve over time.

For now, the most helpful thing you can do to help us improve is provide some of the information I mentioned above, so we can look into this in more depth. Thanks!

Roon Radio was the primary reason I found it easy to justify the annual cost of Roon. With Radio 1.0, it was as though Roon was SMARTLY curating stations of LIKE music for me. Sure it could be repetitive at times - but it seems the fix in 2.0 tossed out the baby with the bath water.

My journey with Radio 2.0 this morning:

From Yes to Genesis (good) then to Lou Reed (WTF?) then to The Band (really?) then The Who, Little Feat, Cat Stevens, and The Allman Brothers.

No doubt all great artists, but this has ventured so far from Roundabout from Yes that it almost seems entirely random. I used to like Radio keeping me closer in musical proximity to the song that launched Radio.

Interesting - a Fleetwood Mac track (Sentimental Lady) was just followed by Jeff Beck (Freeway Jam). Really? A track from the Dead then followed that (Rosemary). Really? Would any human curator pick these tracks based on a request to play songs like Roundabout? Maybe, but I wouldn’t want him DJing for me.

It used to seem as though Roon was SMARTLY curating stations of LIKE music for me. If I want to sit down to hear Yes and music like Yes, I shouldn’t have to sit through Loy Reed or the Dead or have to reach to my remote to skip over their tracks. If I’m in the mood to stretch that far from Yes, Roon should let me choose to venture that far.

I was able to easily justify Roon’s because of Radio. I’m seriously bummed that this feature has been so radically changed.

Roon should consider adding a slider that allows the user to govern how far Radio stretches from the track that initiated Radio. At the minimum setting, it would use Radio 1.0’s algorithm. At maximum setting it would use stretch to using Radio 2.0’s algorithm. I’d want to set it somewhere in between, but much closer to 1.0. In the short term, I’d be thrilled just to be able to switch back to the 1.0 algorithm. Can you please bring that back as an option?

Disconnect local files and see if Tidal may please you mow ?
Maybe you discover some good new artists.

I would definitely support a return to the previous algorithm which I consistently enjoyed. Now I invariably stop radio very quickly because of the erratic selections.

Different strokes… I found the prior version of a Radio very repetitive and predictable.

I would support the sliders idea. Great to be able to determine whether I’m in an adventurous mood or want a narrow selection.

BTW to the OP: those all look like fine classic rock selections. If you wanted Prog alone, why not use Genre?

Previous radio was dreadful and played the same artists and albums over and over.

“Why not use Genre?” Because the previous Radio 1.0 feature was smarter than that.

Right after I submitted my post here yesterday, Roon Radio determined that “Thunder Road” by Springsteen is similar to Roundabout. Both are great songs, but other that how is it that they are considered similar?

Roon: please give us the option to switch back to Radio 1.0. Or give us a algorithm that’s a good as 1.0’s at finding similar songs but is less inclined to be repetitive,

Agree that the new Radio function is a bit broken, I have audio-books in my library … and yes these are played … Beethoven followed by Stephen King … perfect.