Let me say one thing right away: I prefer to have a local collection and even so I’ve bought hundreds of albums at qobuz over the last few years I will not sign my Roon installation into my qobuz (non-streaming) account. So in a way it disappoints me a little that a new feature got released and I cannot make any use of it. But as @Chrislayeruk hinted: the model’s hopefully still in training – who knows, maybe in a year Roon feels more confident to also let local libraries profit from this Radio feature? Until then I resort to human curated radio - it still exists, Radio Paradise being just one fine example.

More generally, the fact that Roon will not provide a roadmap or timeline, and have actually ghosted features that in the ancient past were due to arrive “real soon now”, makes speculation about what’s next more attractive to those of us who have decided to each year reconsider our subscription fee.

From what I remember Roonlabs never went so far as to really say something will come on day x - except maybe bug fixes. They quite cleverly - and, given the circumstances they operate in, in my opinion rightly so - avoid commitments of this kind.

But it’s only speculation. Who can foretell the future?

Wasn’t this the promise?

More seriously, there’s another thing around this “can only do it in the cloud” approach which I find disturbing and if it is indeed a hint into which direction Roonlabs intends to go I may waste a lifetime (subscription) on waiting for improvements I’d like to see. Right now, the improved updated search doesn’t work very well on a local only library and it seems to suffer from (temporary?) limits imposed on it which - my guess - originate from cloud service / performance restrictions and huge data sets I don’t have anything to do with. That gives me bad feelings. But I have the advantage that I don’t need to reconsider my subscription. If it ends, I couldn’t care less - either Roonlabs or me’s gone by then.

Agreed. Brian even said that if there’s no connection to an external library, 1.6 will revert to the 1.5 implementation of radio. This is my case (no external libraries… for now

) and last night my impression was that radio behaved the same as in 1.5. Even when pressing the thumbs down, you don’t get the popup asking you why (which I think is a feature of the new algorithm).

The Queue is the only place to go to see Up Next. I think Up Next should be available elsewhere as well. The Queue is a fine place to have it, and I understand the logic that Up Next is related to the Queue. However when Radio is on the Queue is not really the Queue as it is with a predetermined list of songs.

If you intend just to let Roon Radio fly you, but you want to see what’s up next, here is what you have to look at: 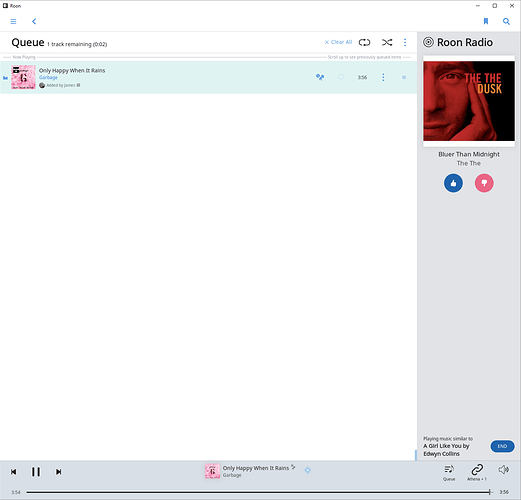 I would really like to see Up Next on the Now Playing screen as well, at least as an option.

The Queue is the only place to go to see Up Next. I think Up Next should be available elsewhere as well.

I thought there was also a pop-up - well - popping up with the up next info and voting thumbs. Somewhere in the lower right corner?

Yes like 30 seconds before the song ends. It’s a cool feature. But you have to wait for it, can’t go somewhere and have that on the screen, plus it doesn’t have the album thumbnail with it.

Not disagreeing with you at all–a few things to add–

I think that just running the engine, trying to play a result and finding it’s not available, trying the next one, would lead to a pretty bad experience given the latency of a cloud play attempt (999 failures per success). Some have suggested that, obviously not practical.

Definitely, and there’s an even worse problem with it that may not be as obvious. Even if you’re willing to spin the radio algorithm enough times to generate a radio stream, the 1/100 tracks that you’ll actually “hit” in the library are not well-distributed.

Lets say Radio builds a pool of tracks that spans 500 albums for a given seed. People mostly collect albums. You have 5 of those albums. Now radio is picking out of a 5 album shuffle really inefficiently.

Cue complaints about it being “boring”, “scattered” or “repetitive”, and “stopping randomly after a few hours”.

How well the algorithm can be adapted to local-only we don’t know, don’t know anything of the data representation.

There’s no adapting…it would be a different algorithm, that is not dissimilar from what “library radio” is currently doing–building some sort of content similarity model within the Roon Core, then performing some weighted random picking based on a distance metric in that model, then applying business rules to keep things “on the rails”, “not repetitive”, etc.

Could we apply 20/20 hindsight and re-write library radio using some of what we learned from Roon Radio? Sure, but it would be a bad use of our effort. Lots of time and an ultra-long testing/iteration cycle to make something that already works OK work slightly better.

The “old” algorithm isn’t actually old–we released it 13 months ago. Sure, a total overhaul could make some modest improvements, but there is no new functionality to deliver there. It would make the same promises as the old feature and work in the same situations. Boring.

Roon Radio was worth serious effort both because it shares infrastructure with future discovery/exploration features, and because it adds a whole new dimension of functionality to the product. Sinking a bunch of resources into squeezing the next 5-10% improvement out of the library algorithm when we just overhauled it slightly over a year ago would be a big waste. Especially now, since a steep majority of our users have a better alternative–Roon Radio.

Also–it’s worth noting–we have been open about the plans for Roon Radio for a long time. It is and has always been on the same roadmap as library radio, with the plan to release in phases. Roon Radio is the final delivery from that plan that I laid out last year.

Roon Radio was worth serious effort both because it shares infrastructure with future discovery/exploration features,

OK now you have my attention…

Hey, I understand backward compatibility is a difficult issue technically. And I am aware of temperature and pressure difference, also humidity, although for domestic listening room (not halls) the high frequency attenuation variation is truly small and away from the most sensitive octaves for our ears.

There are differences in the implementation of convolutional filters between 1.5 and 1.6, says Roon. They are supposedly better in 1.6. But what about compatibility with HQplayer with some large tap count filters ?

My point is: OK, but when a release induces changes that are irreversible, vendor should make it VERY CLEAR. Not in some remote documentation, but directly in the upgrading process. Like I wrote tentatively “ This upgrade cannot be reversed, and former database backups cannot be used. Are you sure you want to continue ?". So at least, by pressing “CONTINUE” users make a fully informed decision.

I wish that warning would have been there for 1.6, as then I would have patiently waited a few weeks, monitoring the most accurate comments from users having done the change. I already have at least one clearly identified a posteriori reason for such cautiousness (the loss of precision in parametric Q filters in the DSP menu of 1.6).

I, for one, welcome the changes to the Now Playing screen and the bottom scrubber/play buttons. I don’t often listen to music with lyrics, but look forward to seeing that working out well.

I noticed that Featured Foreheads is still part of 1.6

Roon Radio is the best feature. The integration with Tidal is fantastic and has helped me find lot’s of new music.

I don’t know if it makes sense to program in exceptions to change this behavior or if it is even possible. I also expect this is an edge case in the sense that most Tidal / Qobuz users are paying for streaming and will not have this issue.

For those of us that have large local collections (and thus little desire or need to use a streaming service to access content) it makes sense to have have Radio make selections from the cloud and simply skip ahead on picks not in the local library till it finds the next pick that does exist in local content. If this can be accomplished without compromising the Radio experience of users that do make use of a streaming service then I can’t see why it wouldn’t be an acceptable compromise.

I also get @brian’s explanation above re why it would not work well for users with small local collections.

My ask to Roon would be to leave things as they are whereby the presence of an account on a streaming service (with or without ability to play content) triggers 1.6’s Radio algorithms. Let the individual user decide what works best for them, and live with the occasional dropout if they choose to.

I question this idea. I wrote:
Wrt using the cloud-scale learning on smaller-scale data, yes, in some cases that works (like in my Haitian Creole example). How well that could work in this case is an interesting question: since your library is three or four orders of magnitude smaller than the cloud services’ I think that just running the engine, trying to play a result and finding it’s not available, trying the next one, would lead to a pretty bad experience given the latency of a cloud play attempt (999 failures per success). Some have suggested that, obviously not practical.

Brian agreed and was even stronger:

Not disagreeing with you at all–a few things to add– Definitely, and there’s an even worse problem with it that may not be as obvious. Even if you’re willing to spin the radio algorithm enough times to generate a radio stream, the 1/100 tracks that you’ll actually “hit” in the library are not well-distributed. Lets say Radio builds a pool of tracks that spans 500 albums for a given seed. People mostly collect albums. You have 5 of those albums. Now radio is picking out of a 5 album shuffle re…

I question this idea

Like I said, leave things as they are and let the user decide if the outcome works for them.

If it were leveraging cloud without you having an account I’d agree. As things stand you’d have to make an active decision to opt in (and have a potentially inferior experience (dependent on lib size)) and if it doesn’t work you make an active decision to opt out. FWIW I’ve let it run for days using an active streaming account with Qobuz and I’d say >95% of picks are present and played from my library. So given a sufficient library my experience would be bloody good with a Tidal or Qobuz account that can’t serve content. If I had only a few thousand albums my experience would likely be worse, in which case I would just remove my Qobuz and Tidal credentials from Roon and enjoy the 1.5 radio algorithm.

Could you give us some idea as to the size of your local library?

You may have to wait a few days for new artwork to download.

Is this a bug, listening to this track, I decided to fav it on The ‘now playing’ screen. The Heart didn’t fill. 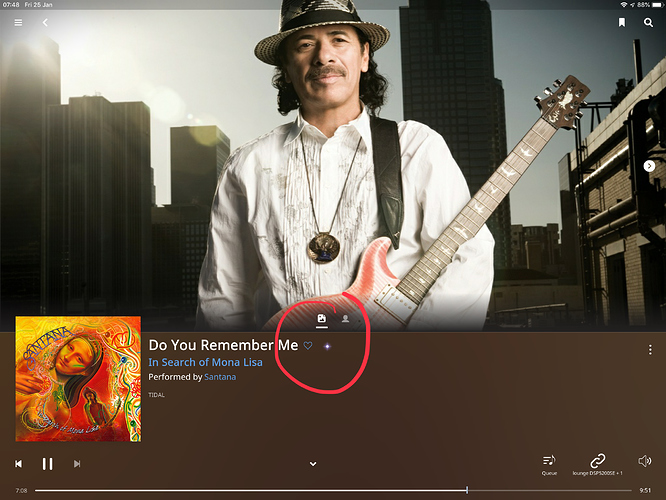 When I looked on the queue the Heart was filled but still not on the above screen. 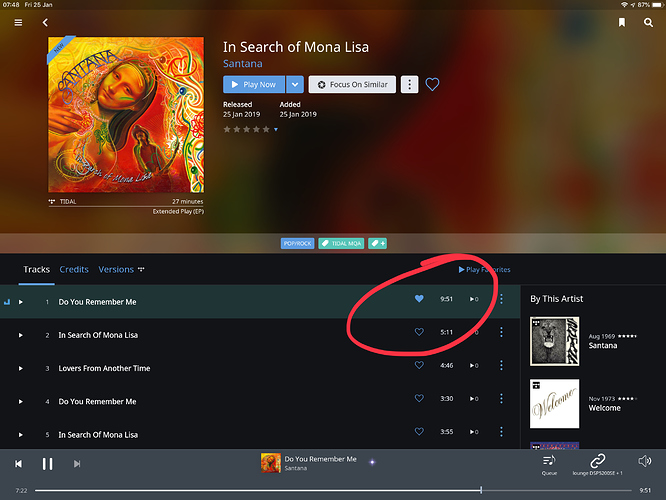 A post was split to a new topic: Tidal and Qobuz Stopped Working

Is this a bug, listening to this track, I decided to fav it on The ‘now playing’ screen. The Heart didn’t fill.