Roon does not recognize Mozart225

Did you find a solution? I’m struggling too. Searched the forum but couldn’t find a solution how to split it up to have it identified. If anyone does I’d be grateful!

Guys, the only metadata that I’m aware of for the entire 200-CD set is that in MusicBrainz.

Unfortunately, they have chosen to split the collection into five different releases of 40CDs. If it was easy to join these up in our current metadata system, I would have done it months ago, but it’s not. I did go on to the MusicBrainz forum to try and get these merged into a single release, but I sensed reticence and didn’t push my luck; I will try again.

However, it has just occurred to me that there is a very reasonable, though less than ideal solution; apologies that I didn’t think of it sooner. If you can split the 200 CDs into groups of 40, the metadata is available. Manual identification will probably be needed, but you never know.

Note: Don’t alter the metadata in your file tags; keep the CD numbers as they are.

Enter “Wolfgang Amadeus Mozart” and “The New Complete Edition” in the search and select the top hit.

Because MusicBrainz is incorrectly treating these groups of 40 CDs as different releases within the same release group, to access the different CD groups, you need to use the metadata selector to pick the correct one. As you can see in the screenshot below, there are five “editions” that you can choose from. 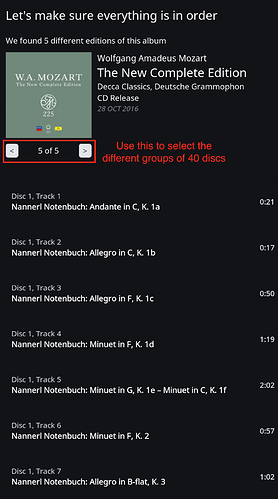 Note that, if the metadata does change, it could mess up this workaround. If it does and I’m made aware of it, I will update this thread.

Hi @joel, thanks for your reply. I tried it, but unfortunately, when using the metadata selector, Roon keeps freezing. The same happens when I try to identify the 10 seperate volumes of the 240 disc Karajan box set. Could you please tell me what you see when re-identifying (a random disc you pretend to be) one of the five “editions” of Mozart 225? Is there a review, for example? Otherwise there is no benefit over the self-merged four volumes I have now (which is the actual way Mozart 225 is split). Many thanks in advance!

@koen Perhaps you need to raise a separate thread on that freezing problem with support?

The screenshots I posted were made, as you have suggested, using a random disc. There won’t be a review, but I just checked the metadata for CDs 1-40 and there seems to be full composition metadata and a lot of performer credits.

Thanks again @joel, I copied my 4 volume box and redivided the copy in 5 separate “albums”, which were then indeed identified as five volumes in Roon.

Not sure I like this, because now the logic (Vol 1 Chamber Music, Vol 2 Orchestral, Vol 3 Theatre, Vol 4 Sacred) is lost, so I will keep both the original and the copy for a while to see what works for the time being. Hope there will be correct metadata in the end! Thanks though for your help with this, I really appreciate it.

Also, thank you for the suggestion about the freezing problem, I’ll try some more and will open a separate thread if the issue continues.

Metadata for the entire Mozart 225 boxset are now available in Roon and can be found using the following search terms:

This is not the solution because doing what suggested there is a warning that the files do not correspond. Each disc is different and has a number Mxxx and a title.
Classic music is a serious business requiring an equally serious approach.
Are you ready for Bach 333? Your next headache.
I enjoy the sound quality of Roon but the programmers really stinks with classical music. I uploaded the files of a Mendhelson violen conceer and I have 5 discs but only one has all the files, the remaining 4 only contain one trace. This is something that never and I repeat never occurred with the so much blames iTunes, poor sound I agree but super coding people at Apple.

You have to create 200 subfolders (CD1, CD2,…,CD200) and tag each CD with the right disc number. After that Mozart 225 is fine with Roon. OK, boxset handling in general needs some improvement.

By the way, with the provided PDF from Decca and Lightroom it is easy to make nice covers for each disc from the box.

Could you be so kind and explain in more detail how you use the PDF for making covers? Where do I find this PDF you are referring to?

I’m not a classical music listener so I’m not sure why I am responding to this thread. I think it’s because I am a little in awe of anyone who would rip and curate a 200 CD box set. And based on what I have read on this forum most of that awe is for the effort to curate given the poor metadata for classical music, the inherently complex nature of the metadata and the difficulties getting Roon to behave the way you want it to. Really hoping things improve for all classical music lovers!

I did check Amazon in the US and they still have one of these box sets available at $630 plus shipping and taxes. A bit out of my league since that will cover almost three years of Tidal streaming but Tidal does appear to have the complete set available as 26 distinct multi disk offerings.

Any suggestions regarding a Tidal offering to start with?

You could shrink that in Lightroom easy by using the synchronize feature for front and back cover. First You have to extract the pictures from the PDF. There are several free online services for converting/extracting the files from PDF to JPG. Luckily each side from the PDF has the right covers for the corresponding CD. I had tried three or four services, but do not remember which one was the best in terms of resolution, sorry. Please use google.

Unfortunately, they have chosen to split the collection into five different releases of 40CDs. If it was easy to join these up in our current metadata system, I would have done it months ago, but it’s not. I did go on to the MusicBrainz forum to try and get these merged into a single release, but I sensed reticence and didn’t push my luck; I will try again.

I think the problem is that the MusiBrainz User Interface just cannot currently handle a 200 disc release, it would just time out trying to load it.

@paultaylor I was updating the thread to say that MusicBrainz now does have a 200-disc release.

Just had a look. Some sets are done, quartets are not. They are properly done in the Quboz app.

It could be worse, I’ve misplaced disc 17 of 21 in my Haydn Quartets box set. The good news is it’s in Qobuz (the Los Angeles Q edition)

I have my Mozart 225 collection broken out in a collection of subfolders labeled Disc001-Disc200. Within each subfolder I included a Folder.jpg file with the correct album cover for the associated DiscXXX. Unfortunately, Roon has applied the same, generic, Mozart 225 album cover to each of the 200 discs. How do I get Roon to apply the per-folder album covers?
Thanks.

I’m still in the trial period with Roon… and, frankly, one of the prime motivators for trying Roon was to solve this very problem. Without it, I don’t see myself continuing after the trial.

[edit] I just figured out how to change the album cover art manually… I guess I’ll have a go at that… 150 times!

[2nd edit] After doing some more research, it appears that Roon thinks its has 2 choices for album cover for each of the mis-covered albums… One of them is the generic cover, and the other is my album art (Folder.jpg). If I understand some of the posts I have read on this forum, it is picking the ‘largest’ of those two choices. Is there a way for me to force it to choose my own cover art? When I re-scan the affected albums, the generic is Always selected.
??

[final edit] Whoo hoo! This post (Prefer cover art from file tags - #2 by Rugby) provided the instructions for making the ‘prefer file’ change to the whole batch!!! Thank you!!!

Yeah, that one instruction got me to looking in some of the right places for how to manipulate Roon and fix some of the things that it wasn’t doing quite right (most of it self-inflicted.) Thanks, again, for getting me off the mark.
Cheers!
p.s. The Mozart 225 collection is still not 100%, but it’s a little better off than when I started.