I only have about 1700 albums currently in my Roon library, However on almost EVERY page, I have duplicate albums. They can be in the same format (e.g. 2 ACC, 2 CD, 2 MP3) ) or different formats ( e.g, CD, ACC). I’m not a fan of iTunes ( that of course I had to use for over a decade both buying downloads and ripping CD’s) and I know I have some iTune library issues that I have tried to resolve without any luck.

I’ve spent months and 100 of hours on this so far without any resolution.
Im loving ROON because I’m now listening to my collection more than ever and discovering new music so before my library mess gets bigger I’m considering:

Any thoughts/insights before I pull the trigger?

Duplicate albums are almost always the result of how one sets up storage.
Settings==>Storage 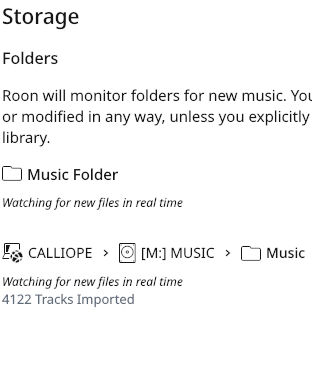 Welcome to the Roon Community @Kendall_Kay!
There are a number of ways to deal with this, depending on what the root issue is and how bad it is.
First, are you sure you are not pointing to the same directory twice? If you could post a screenshot of Settings>Storage we could see if that is an issue.
Another thing you can do is go to the Album view, then select Focus (upper left part of the page) and then select “Inspector” and click on “Duplicates”. That will enumerate all your duplicated albums in one place. You might choose to delete some of those, (the lower resolution version). Although I would make a backup first.
Also, I would not rip to WAV. Rip to FLAC, it is more transportable and has better preservation of tags.

So it looks like you have a bunch of albums directly on your Mac (in the Music Folder) and the rest are on a portable drive. Unless the albums in your Music folder duplicate what’s on
the iTunes folder, it isn’t the typical redundancy where you are pointing to the same folder twice (which is also what @xxx is saying).
About how many albums do you think are duplicates?
Again, I would not advocate irrevocably deleting a subset just yet. Creating a parallel working drive would suffice. But one way to systematically delete the lower resolution album would be to use Focus. If you have a few duplicates, you can show duplicates through Focus and pick through and delete the lower resolution duplicate. If you have a lot, you may need to do it more systematically. First select Duplicates, then, again in Focus go to Format and pick MP3. This should show you all the MP3 versions of albums that are duplicates. That is likely the lower resolution. You could then select all of those and delete them in one fell swoop.

Thanks. This is very helpful…I will try later tonight to do the deletions . Using Focus/Inspector/Duplicates it has identified 608 albums out of 1782. (and some are triplicates…)

I too am new to roon, After first setting up my server, I copied over my old (20years?) iTunes library of about 20K tracks. as that imported I started loading my HI-res library by coping it over the ethernet to my new library. I am starting to see the duplicates appear where I have both AAC at 320kps from iTunes and Hi-Res copies wether ripped to FLAC from cd or purchased via other sources over the years.

Once all my music is imported, i plan to use roon to “focus” on duplicates and delete the lower resolution of the duplicates retaining the higher res copies automatically. This way I will not lose any content, only low quality rips.

The harder part will be going back and finding tracks I only ripped in AAC and tracking down the original disc in the basement archives so I can re-rip them to FLAC.

I have loaded EAC on the server so I plan to rip right into Roon.

This is my plan, not sure if its the right plan, but it sounds like it might be a good plan for you as well…

Depending on whether you use a streaming service or not, you may find that streaming versions are available through Qobuz/Tidal. That winnows it down even further.
It can be hard for some folks to get past the “I own it” to “I will rent it”. But there are a lot of advantages to streaming and not having to rip old CDs is but one.

If Roon has detected them as duplicates, I would assume it would show them as Versions of the same albums? You can check that, just open one of the duplicate in Roon and click on Versions. If that is so, Roon should choose the highest resolution version as the primary, and the lower resolution ones basically recede in the background. So they shouldn’t really do any harm. You can leave them there.

If they show up in the main album browser, go into Settings/General and make sure that Show hidden tracks and albums is set to No.

(I often leave duplicates intentionally, e.g. if I have a ripped CD or a Tidal album and then when I signed up to Qobuz I found a high res version, I add the Qobuz but leave the other version(s) in place, because why not, and maybe Qobuz loses its version…)

For me, I made the decision to IGNORE all my iTunes stuff.

I created a “Lossless” folder on the server, and I’ve ripped my CDs there to lossless FLAC files, and Roon only points to that. I guess I’m ok with “losing” the AAC albums I bought on iTunes (as well as the lossy CD rips) because I subscribe to Tidal/Qobuz, where stuff is lossless, and I have access to anything I bought just by streaming it. I guess it might have been a bit of a waste of time and money, but it was YEARS ago.

iTunes might have lossless stuff now, but I’m really happy with these services.

You can point to those files anytime you want, if you need to access them. But I’d be inclined to just have Roon ignore them, and thus ignore the dupes.

Thanks for comment. What is the danger of deleting my screwed up iTunes library and creating a new fresh Roon library without iTunes from scratch? I still have about 1500 CD’s that i can rip in FLAC on a zen mini and start with the highest fidelity as a basis with going forward. Part of the rationale is that i bought $$$$ of CD’s that I own the music and can access anywhere. I have do issues renting new music ( I use Tidal) going forward but want to preserve the investment I made. I plan to get rid of CD’s to simplify storage.

What is the danger of deleting my screwed up iTunes library and creating a new fresh Roon library without iTunes from scratch?

No danger at all, but then I’ve never used iTunes.

As long as you don’t lose music you want, then no problem.

I have a buddy who has 10K CDs. Lining the walls stacked everywhere in his listening room. I am totally sold on Roon as an essential for any music lover (audiophile or not). I want to recommend something to him that would be a core computer that could rip CDs. I don’t know much about the CD ripping into Roon since all mine were already on my drive. What would a good setup that won’t break the bank?

This is similar to the plan Im thinking of doing. My iTunes library has missing songs within albums, missing albums… MP3 , etc. I have all the original CD’s and just think I should buy a zen mini mkIII, rip everything I have in FLAC and start Roon from scratch. I want stay as far as possible from iTunes …not a fan as to what it has evolved too. How is your project going? What are you using to rip your CD’s ? thx

FWIW I use dBpoweramp CD ripper

Roon does NOT choose the highest resolution for me automatically, thats part of my issue(s). I’m listening and following the audio signal processing path…I’m getting low quality quality . I have to stop listening , go into the album, look at versions and select the quality I want to hear.

AndersVinberg: I did the sort you suggested and reduced the gross number of duplicates… Im down to 1458 albums from the over 1700 I listed. Im now showing only some DUPLICATES ( VS Triplicates in some cases) But I may have 2 CD’s, an ACC and CD,2 ACC’s… 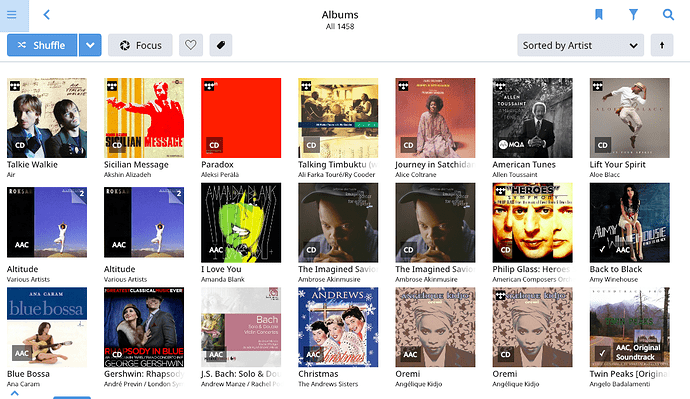 So I just built my Roon server on wed. I needed 2 days to copy down the 1.5 TB of hi res files from my office (across town) server. So far I am loving roon. I loaded my iTunes library today and deleted dupes, about 600 albums. I just have to many things in iTunes I don’t have on cd I don’t want to lose. I just discovered live radio this morning, sure beats listening to nor on the echo. Now I am working cleaning up the library, lots to do, many “fake play lists” that cam in as albums due to bad tags. But this is work I find enjoyable, like a real hobby. It’s like sorting my albums , as I do it I get lots of fun memories. I am rediscovering music I have completely forgotten about.

I had stopped using iTunes about 3 years ago when the family switched to a Spotify account. But now that I am able to my audio Phil’s system back up, I needed to get my hi res files usable agin.

Tidal will be next…

Can Roon detect when an album has “true” duplicates, down to same format, track minutes, really duplicate that is just taking up excess storage?

Looking to see if such capability exist for me to help with cleaning up storage space.

Try this and see if this is what you want to do. From Roon “home” page, select Albums. Then on Focus, scroll right several pages until you see Duplicates. Select this and this should present a listing of what Roon considers to be dupes. If you don’t see info you want, go to Settings, then select Customize Album Display and toggle ON what you want displayed.
Hope this helps…