Every year an interesting shift occurs in my listening preferences at about the middle of October when the evening air turns crisp and the autumn sun flames out in fallen leaf orange behind the trees on the hill. The tones from my speakers reliably reflect this seasonal change, with pastoral hues of wet earth and black trees, as the hypnotic strains of British Folk drift through my space. I can’t quite explain why my mind equates colder weather with that genre; perhaps it’s the tug of an ancestral memory that has been stripped of all its features but sound. Whatever the cause, my default fall selections are always a familiar narrow rotation of Brit-Folk favs. Just as routinely, I have often vowed that I’ll investigate the golden era of British and Irish Folk music more thoroughly. And, despite never having managed to keep that promise in the past, I’ve always meant to.

The problem has been that as much as I love this music, and recognize a smattering of artists and albums outside of my favorites, exploring the genre can feel at times like getting turned around in the forest. There’s so much stylistic similarity in the landscape, ensembles absorbed and discarded personnel frequently, and groups embraced new sounds so often that it’s quite difficult to find your footing on the path of discovery. But if one is fortunate enough to have Roon, and a synced streaming service as a guide, the same challenge suddenly becomes an inspired adventure of autumnal acoustics.

This time I tried something different by beginning with a favorite selection and then allowing Roon to influence my new route - the scenery promptly changed and offered a wealth of surprise and variety I’ve never encountered previously. A few hours later I’d been reacquainted with a few forgotten gems and had acquired a handful of new discoveries. Each one of them linked to my original selection by Roon’s unparalleled understanding of the web of sound. All the listener must do is simply follow the notes.

My first go-to of fall is always Traffic - John Barleycorn (Must Die). It’s something of a wonder that the record exists as a Traffic album at all. It was to be Steve Winwood’s first solo release, but it was having trouble getting started. Former bandmate Jim Capaldi was invited ‘round to collaborate, a second former partner, Chris Wood, showed up - and a trio incarnation of Traffic was accidentally formed. Winwood, at twenty two years old, reimagined an Elizabethan era folk standard for the title track which recounts the story of John Barleycorn - a character who suffers a wrath of indignities that correspond with the phases of barley cultivation. It exhibits a staggeringly brilliant folk authenticity not found anywhere else on the album, and only rarely in Traffic’s discography. You’ll catch yourself checking the credits in Roon incredulously for confirmation that this was a trio when you hear how much music these guys put down. Winwood’s delicate acoustic guitar ties Celtic patterns through his accompanying piano chords as Chris Wood weaves flute airs around Jim Capaldi’s tasteful rustic percussion. Winwood and Capaldi’s vocals relay the story of Barleycorn’s saga with the skill of master storytellers. It might not even be British Folk by some definitions but it defies any effort to argue it otherwise. 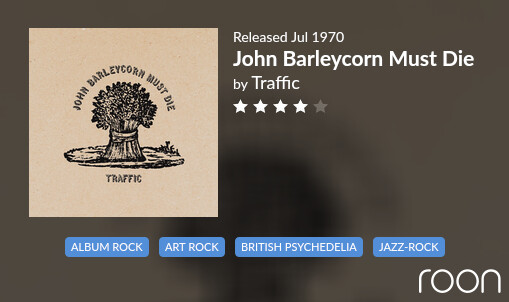 From Barleycorn, my go-to is always Fairport Convention but this time I vowed to do things differently. So instead of instinctively queueing up their What We Did On Our Holidays album I scrolled to similar artists instead, and chose Sandy Danny. Her discography revealed the long out-of-print compilation I’ve Always Kept a Unicorn : The Acoustic Sandy Denny, which served up Sandy Denny with Fairport Convention - She Moves Through the Fair. A favorite from the aforementioned Fairport album, but here rendered in a deft acoustic version, with guitars simultaneously articulate and percussive supporting Denny’s angelic voice to absolute perfection. Fairport Convention could strip the music down to nothing and still dig into the marrow of the listener. This track is a superlative example of that. As always, Roon makes unearthing these previously unknown alternate versions an unburdened joy. New favorites are always waiting at the end of a few mouse clicks. 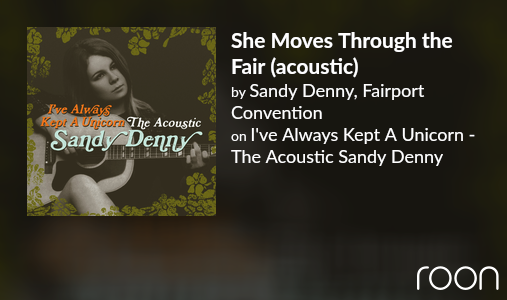 TIDAL: She Moves Through The Fair by Fairport Convention on TIDAL
Qobuz: Open Qobuz

Nick Drake - Time Has Told Me is a synonym for fall to my ears. There isn’t a year that goes by where Nick Drake doesn’t become a regular on my turntable. I’ve heard that listening to his music is permitted at other times of the year as well but I’ve never risked testing the theory. This beautifully written and performed original is the auditory equivalent of a warm fire in the cold of the countryside. And it’s a natural follow up to the previous selection because two members of Fairport Convention contribute to it. If that’s not something you knew previously, it’s no problem. Roon hips you to that stuff in the track credits. All through the software it’s that simple. This track is one to follow the lyrics on, it’s another example of Nick Drake’s poetry outshining the transcendent music that carries it along. 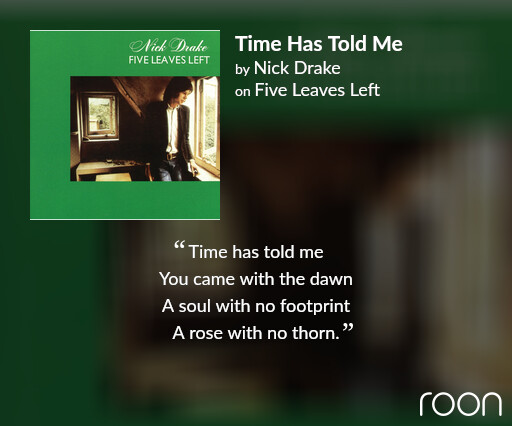 TIDAL: Time Has Told Me by Nick Drake on TIDAL
Qobuz: Open Qobuz

I typically follow Nick Drake with Bert Jansch or John Renbourn, but this time I let Roon point me toward Pentangle - Basket of Light where both were band members. I chose the album because I recognized it’s cover from a former roommate’s vinyl collection. I had only a vague memory of the music on it. The record is a spellbinding chimera, an eclectic hybrid of Indian influenced modal sounds and progressive jazz-psyche infused with British Folk originals. It provided an intriguing inroad into a band I’ve been curious about for years. In Roon the transition from curiosity to discovery is as natural as the change in seasons. 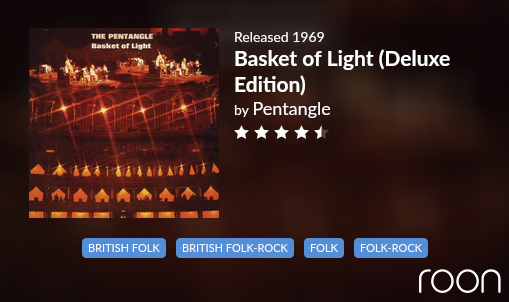 From Pentangle I was served up a selection in the Similar Albums section that yielded a thick vein of gold that cut straight through to the heart of the music. Various Artists - Anthems in Eden: An Anthology Of British & Irish Folk 1955-1978 is an eighty four track, multi-disc collection, that reveals the complete genetic encoding of the idiom. Finding recordings that thoroughly unlock the mysteries of a genre is commonplace in Roon because the design was built with this in mind. Try to imagine another place where that’s facilitated with such ease, effortless discovery of new favorites that are informed by an intimate understanding of the interconnected storylines of the music we already love. That’s what Roon does, and it’s the reason why I’m finally able to explore British Folk in the way I’ve always wanted. 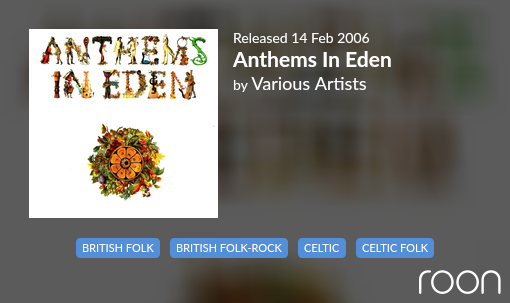 Tell us about your experiences! Does a certain genre, artist, band, or album make you think of the arrival of Autumn? If so, we’d love to hear about them. Share them with us in this thread. And thank you all for your wonderful contributions in the Classical Community Conversations thread! We’re looking forward to sharing your recommendations in an upcoming playlist. Please stay tuned for that!

Certain songs always conjure up Autumn for me when I hear them out of season. And, I certainly play them in season when I fire up my first fire of the season with a beverage. In no particular order:

Hi Jamie, definitely a stupid question but how do I open the links mentioned in your article in roon ?

With cooler weather, I turn to Joni Mitchell: 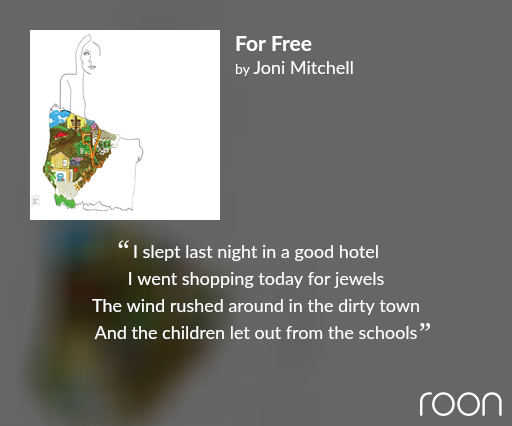 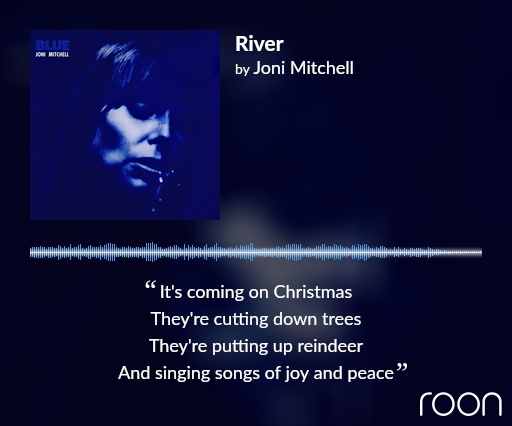 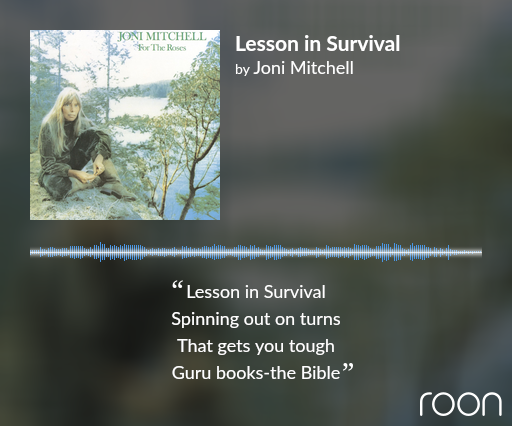 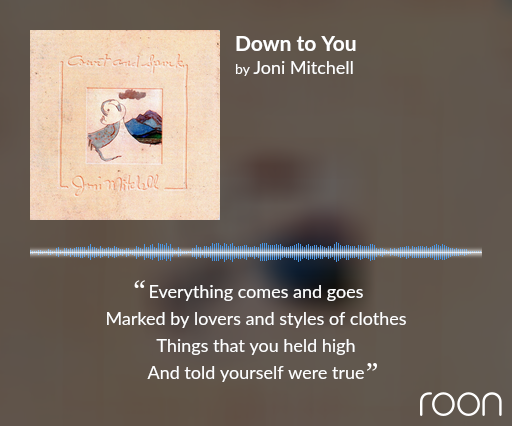 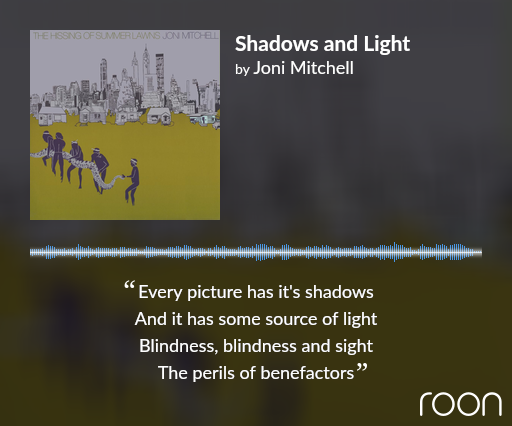 Nostalgia ain’t what it used to be, I started my musical journey with the good old British folk club. Artists there now household names (at least in my house) Martin Carthy & Dave Swarbrick , the Watersons etc in 1966. At the Hyde United FC clubhouse

To fully explore start with Fairport and work back. Swarbrick again, Ashley Hutchings, Richard Thompson, the Albion band and of course Sandy herself , alas.

For all the critics of rap on Tidal , you can find most of the history of English folk , even really obscure stuff like John Kirkpatrick

Keep this thread going there is so much good stuff.

Just to throw one more in dig out the Young Tradition out in Tidal , real “Badger Dropping Music”

Hey @Dirk-Pitt, thank you for asking!

Those links will take you directly to the songs in TIDAL and Qobuz respectively. Simply add them to your streaming service favorites there and they’ll automatically populate in your Roon library.