I started with XL - you’re right though, the second reboot has enabled the XL choice.

Is there a full 337 XL build I can download and install from scratch?

You can take the XL image from the website.
It’s automatically updated during installation.

works now, many thanks.

Thanks. I have RoPieee on three things, an Allo Digione Signature, HiFiBerry Digi+, and a plain 3B that is plugged into the Aux input of a Tivoli One table radio. The other two are on the HiFi, HiFiBerry to preamp Coax input, Digione Signature to a Schiit Gumby multibit to input 5 (balanced). The Tivoli stands in for a grumpy HomePod that hangs on to banned Apple Music in preference to connecting to a non-Apple source. The Raspberry Pi on-board DAC is ill-regarded but perfectly fine for use with a small radio for casual listening or Internet Radio listening over night. RoPieee does not load Roon Bridge unless it finds a Roon ready hat. So Airplay only with the base hardware.

I’d nominate GoogleCast as the next streaming protocol to pick up. Google has discontinued the ChromeCast Audio without offering a replacement. The Chromecast Audio is a good endpoint for small table radios and such but like Airport Express had an optical output for connection to a high end DAC.

The GoogleCast sound is noticeably superior to AirPlay One. I’ve not compared it to AirPlay Two. Against AirPlay One, the sound stage was expansive with good image specificity when playing material served by Plex which could swing either way. Belafonte opening at Carnegie Hall demonstrates this nicely. The applause is noticeably clearer and ripples across the hall. Oh, and Belafonte’s voice!

Thile-Mehldau “Scarlet Town” is a good demo track. The piano notes should dance before you and Chris mandolin scratching should be pinpoint sharp and picking play should be crystal clear and articulate even when very soft. Chris is a master of small detail in his mandolin playing. AirPlay muddies the image, it is flat and fuzzy in comparison to that coming out of the ChromeCast audio. I think the vocals were better when GoogleCast too but it was Gumby that really made the vocal special on this track. Gumby separates the voices and Brad becomes clearly identifiable as a performer as apposed to sounding like Chris singing duet with himself via echo trickery in the mix (a chorus plugin) as rendered by Parasound P5 internal delta-sigma DAC.

I’ve not compared the independent implementation of AirPlay to either Chromecast Audio or Apple AirPlay. Apple is doing something kinky in its sample rate conversion. I’ve not auditioned the Chromecast video dongle as TV has to be on to send audio to the Parasound.

I updated the beginner’s guide with XL information and Pi4 support (v20190819). If anyone spots any errors or ambiguity, please let me know.

I thought it might be helpful to create a beginner’s guide for RoPieee. With Harry’s permission (@spockfish), I have created an initial draft for feedback and improvement:

Harry @spockfish is it recommended to switch the RXL units back to stable now or should one re flash the now available stable image? 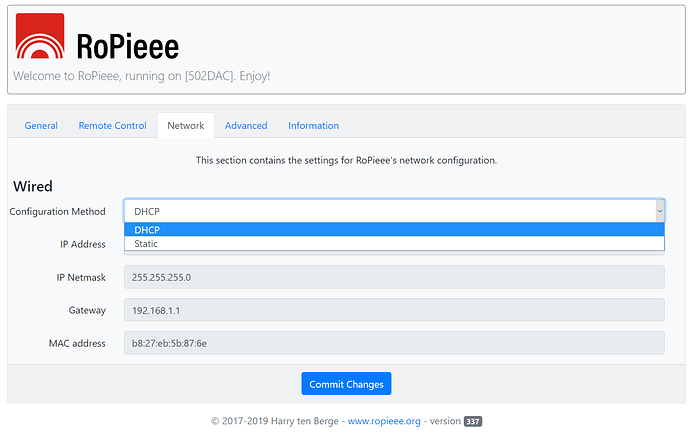 @Alexey_Konyukhov Your warranty bit is set, which results in your unit not properly recognized.

Probably you overclocked your unit or something like that.

Anyways, RoPieee does not support overclocking and can not deal with set warranty bits.

Warranty bits? wow thats a new one on me…tricky stuff

It has been there in the Pi for a long time, basically to make sure that if you overclock your Pi you’re on your own, at least for specific settings (over_voltage is one of them).

I’ll make sure that in a future version of RoPieee this flag is being ignored, but at least it explains why the WiFi didn’t show up (the warranty bit is set in the CPU revision code, which is used by RoPieee for hardware detection).

Harry can you reply comment about 4-5 comments above please.

Oh sorry. missed this one.

Reflashing for going back to stable is not necessary.

I’m afraid this is not going to happen. Unfortunately the Chromecast protocol is proprietary (there are things Google does not make open source

), so until something changes in this situation this is a no go.

The VLC team did a complete clean room implementation (huge achievement), but that’s still the other way around (playing content on a Chromecast device) and we’re looking for receiving Chromecast content.

Sad that is the case. Sounds like you have to be a paid licensee to use the GoogleCast protocols. Too bad they have discontinued ChromeCast audio device. Many of us stream to workshop radios and such that don’t merit a full Roon endpoint. Guess its AirPlay only until Google sees the light and joins Apple in making the protocols freely usable.

Apple is no better on that front. The AirPlay support offered here is a reverse engineering of Apple’s closed protocols. That’s how most protocols are anymore - not open source and not free to implement how one sees fit because the company wants some control over quality of implementation so that their name or the protocol isn’t tarnished by a bad implementation or end user experience.

Hi @spockfish, one of my RoPieee Pi’s is stuck in update limbo. Everything is operational (just using as a display), and showing as being on version 337, but no 337 ‘stuff’ is there. Feedback 0a19ca8edfea22cc

This report is more to alert you to a possible bug than anything. The Pi is working fine and disassembling the display and case to get at the SD card to re flash is a PITA

Thank you for your incredible work and effort.

I misunderstood the release of ALAC as an open codec to include AirPlay. My bad. I can understand that they want stuff tested and to just work. But even AirPlay with genuine Apple iThings can be annoying. I’m talking about you HomePod, Apple Music, and Siri.

My sympathies and thanks to the hard protocol detectives who WireSharked out AirPlay.

Is there a Google 20%er out there who can build GoogleCast endpoint for Raspbian? I’ll miss my ChromeCast audio when it finally croaks.

I had my RoPieeeXL stuck in some old version and wouldn’t update a few weeks back. I had to switch the Update Channel to something else from what it was on the Advanced tab and restart, then back. That made it update.

I always have trouble logging into devices. I can see that my IP is 192.168.1.111 through fing, my routers client page and Roon.
But it just won’t connect, even after power cycling. I’ve renamed the devices because I have multiple. This one in particular is call RooniFiNanoBL.

I can’t login via http://RooniFiNanoBL.local either. Every time I want to change settings I have to pull the SD card and re-install and reconfigure.
Does anyone have suggestions?