Selected Discography shows only albums, which I am not interested in

Is this to annoy me?

Or do I not belong to the target audience of roon anymore? I am a music lover, who only adds those albums that I like to the library. I am not a collector, who adds all the albums of an artist to his library. Apparently roon is focused on the latter.

I am not interested to see those albums, which I did not add to my library because I just do not like these.

I must admit, that the albums at the side in 1.7 were much more convenient. Now you always need to go via the discography tab to find another album of an artist. Further, with classical boxes, you have to scroll 10 CD’s down until you get to the selected discography. Annoying.

Don’t get me wrong, I like to discover new music. But currently I only see music which I am completely not interested in. New music under recommended albums and a button to see more Tidal albums of an artist would suite me fine.

Is this to annoy me?

If you don’t want to see the discography, you can always click the “My Library” tab next to it. It’s “sticky”, which means that from that point on, choosing an album and scrolling down past the album tracks will show other albums in your Library from that album artist.

thanks for that hint. You mean the button next to the focus text

I noticed that I have to set that for every artist, and if I am not mistaken, it sometimes default to not set again. Further I would like to have it sorted by release date. And that you have to set as well again and again.

In the album view, I do not see that sticky option.

Now that is interesting, you probably have to activate that. Because I do not see that. I only see selected discography.

I don’t see that: 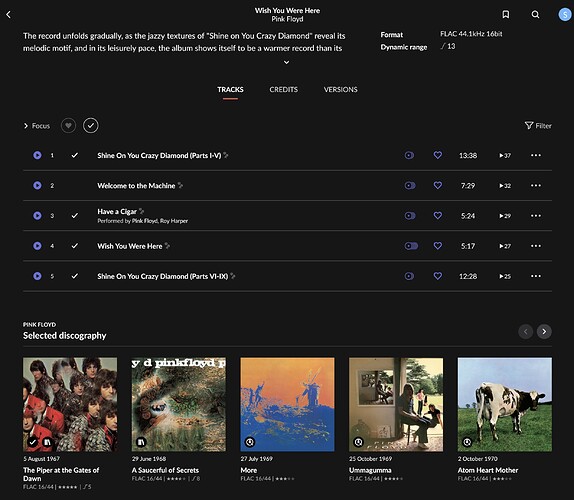 The “My Library” button would be neat. Which version you are on Geoff? I am on build 764

I also do not see it . WHy is that? @support

If you are viewing an album, you see tracks/credits/versi9ns, and if you scroll down you see “selected discography”.

If you are on an artist, you can click on Discography and then the My Library button appears.

I dont know 9n what basis it is “selected”. In my case, they were all in my library as shown by the icon (in your case, one was not), but in some cases I don’t see that listing at all, I see More by John Smith or nothing at all. I think I would say, when you view an album Roon tries to make some interesting selection, but Discography is Discography, and you can filter it,

I only see selected discography.

I think @Geoff_Coupe was talking about the Discography view on the Artist page.

This is good feedback and we appreciate it. The “selected discography” feature was designed to give you a chronological overview of the artist’s career, so you can see what they released right before or after the album you’re looking at, and get a sense of where the album fits into their career.

It’s designed to provide context, but we’ve heard this feedback a few times and have a change coming in our next release that will let you switch to only see library content in this view.

I promise it wasn’t to annoy you

but the feedback is great, and rest assured we have some changes coming. Thank you @mjazz!

Great. I am looking forward for it.