You still have the entire chain as “bit perfect”. There might be things that are yet to be discovered in what we can call “network audio” but Roon is bit perfect if setup correctly. Asynchronous or not

There could well be things yet to be discovered… CD’s were bit perfect, and they after everyone complained, they discovered jitter…

How is everyone here sure roon is bit perfect ? Thats fairly difficult to figure out. Im sorry if these question has been answered a zillion times, I just don’t see anyone who has done this in a conclusive way in any posts or documentation. Obviously DSP, volume and any math would void bit perfect. I have seen some mfgrs claim that a single bit was not altered in any way, but, they still clocked it into a DSP chip, which up converted it and then down converted it. All its settings were set to zero, but, the end result was degraded sound. As I have seen this all too often, I want to be sure about bit-perfect and define it as a checksum VS checksum of the entire chain measured at the DAC input pin.

What is it you are trying to do?

Equal or exceed a setup I already had. Melco + CH App. Right now, its far from it. Its most likely a stupid setting i missed. I am a “bit” off topic tho discussing how to truly tell if a system is “bit perfect”

Its most likely a stupid setting i missed.

Hi,
Can you post a screenshot of Roon signal path when you are playing a track.
If there is anything … amiss setting wise … it will show up there.

I shall shortly. I am not in front of the system until tomorrow, maybe thursday. Now that I am deeper on this I will also check everything.

Not that I would really get what your talking about here, but Ethernet devices/software stacks usually include send/receive buffers and streaming application often (always?) use a stream buffer.

Right now, its far from it. Its most likely a stupid setting i missed.

Should the discrepancies persist even after you setup Roon to ensure that it doesn’t alters the bits, you might should contact the DAC manufacturer also as he’s the only one that knows how the Roon specific code is implemented in the DAC.

As you use an external word clock, there might be incompatibilities/hiccups. There’s a good chance that for the Roon Ready certification only a DAC without external word clock was used. But I’m not an engineer, I don’t know if this matters. That’s why you may have to contact the DAC manufacturer if in doubt.

As you use an external word clock,

I will know more shortly… Its not a external word clock as such. the CH T1 is a 10Mhz clock. This feeds the Melco > Switch > CH C1 DAC. In theroy this should work awesomely with the roon solution as RAAT depends on the DAC clocking as its reference so it would also sync the RAAT synchronous stream with the DAC and even phase lock the switch to the DAC and RAAT. So this should end up as a really crazy well clocked setup that is nearly jitter free.

So it would SEEM this would be ideal and the elegant roon RAAT transport should really shine… With a crazy high end server with a linear power supply and all sorts of fun gear for reproduction the expectation was supposed to be jaw dropping audio with the stunningly beautiful and intuitive roon GUI experience which is unmatched… So please excuse my possible bad forum manners as it was disappointing that the resulting sound was a step backwards. AGAIN, most likely a stupid noob stetting issue, which i will take full credit for and edit my first post to reflect a solution. There are not many settings tho, and i think they are right. So, yes, maybe its some other odd issue… Its always like this tho isn’t it ? Some damn setting someplace in life. hahahahaha…

Thank you everyone. Please excuse my pessimism about bit-perfect.

There have been anecdotal reports of this in the past. A stand alone streamer with files held locally sounding better than Roon across a network. If you assume the issue is a matter of Roon altering bits, you are barking up the wrong tree. I found it to be an issue of network topology and isolating networked audio components from noise on said network. It isn’t hard to ensure Roon doesn’t touch the bits so I doubt that is the issue.

I am Edward Hsu, and I help out from time to time on Customer Support for Taiko Extreme, SGM Evo and SGM 2015 servers.

Can you post a photo of the serial number of your Extreme ? Then we can check what is the hardware configuration of your unit.

Part of the support Taiko offers, is that Taiko will get online with the unit and check settings on the Roon side.

We look at the connection method to the DAC. Most of our customers are connecting via USB, some AES/BEU

Does your CH C1 DAC have a USB or AES BEU input ?

At Taiko, we only have happy customers, as if our unit does not sound satisfying enough for the cost, we take the unit back

The clock on the Ethernet switch, could it be turned off? It may interfere with normal Ethernet and RAAT.

As a general commentary while Chris is still sleeping, the sound quality achieved is very heavily influenced by the data transmission channel / method and the RF emissions that come with it

For the best sound quality achievable, its a competition between the USB receiver in a DAC, the AES/BEU receiver of the DAC, or the renderer module that’s sitting in the DAC.

As a data point, Extreme owners with the MSB select 2 get better sonic performance from from USB than they get from the MSB renderer, and actually remove the renderer for a sonic uptick

( ZzzZZzZzzzZZzzz) Awoken by the sounds of the thread stirring, hahaha…

Edward I sent you a PM…

The clock on the Ethernet switch, could it be turned off? It may interfere with normal Ethernet and RAAT.

Yes, I also have access to a few different high end audio switches…

USB has advantages, its FAR more simple, but, networking has the advantage of opto isolating the 2 devices galvanically and provide isolation from RF.

I will be in front of the setup shortly. But first step is to get the server into its new home on a high shelf and then rehook everything. So, my posts will be late in the day.

Also I looked at all the settings, I have screen shots, everything looks right. 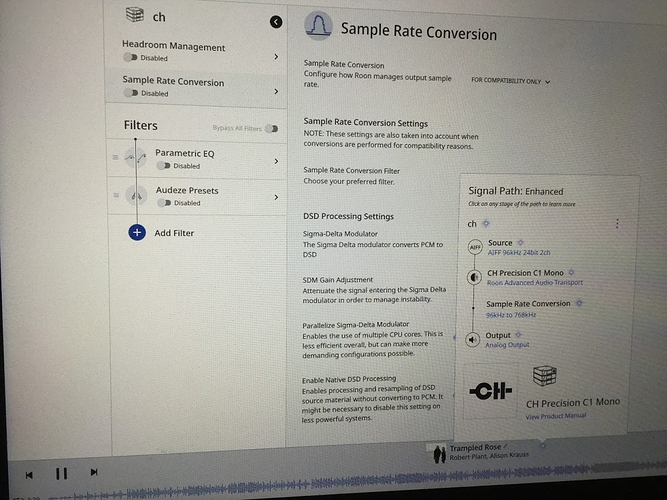 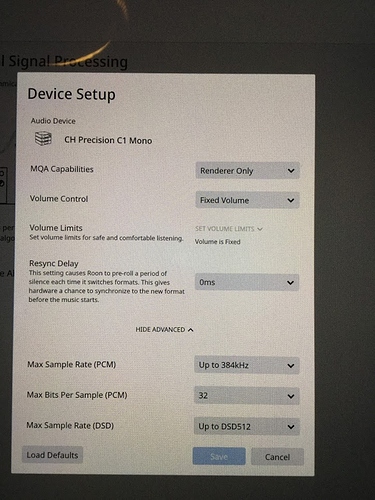 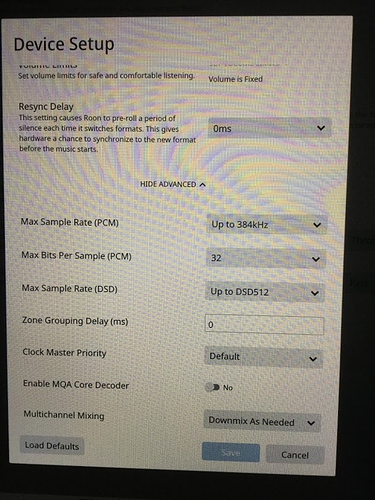 Is this a status of what the DAC is doing on its own ?

Yes, you can see it is detailed after the DAC in the signal path. The DAC is reporting back to Roon what it is performing.

This is quite typical as most modern DACs internally upsample these day … but often the user is unaware.

Are you running two of these? Looks like each is doing 4X upsample.

There are 2 mono DACs if thats what your asking ? One L one R

So overall then… All settings are correct right ? What other settings might effect things ? maybe there are some deep dark core settings ? Maybe these upsampling settings need adjusting on the CH side ? Normally these are a settings menu on the CH.

I played with, well, every combo and topology of hook up I could think of. I tried 2 switches, 1 switch, no ext clock for the switches, unhook the whole setup from the outside network and ran it stand alone, I tried optical/Ethernet in various posistions… Interestingly I heard no real changes. Slight changes. The very obvious ( on this system ) problem stood out clearly.

I hooked up the Melco to the same network switch. And did AB… So a lightweight player. SOunded STUNNING. In my mind this elminated the network as the issue as it worked GREAT for the Melco + CH Precision app solution.

The changes were stunning.

Sarah McLachlan - Angel was my AB… The echo on her voice which gives the song its magistic feel and defines the space she is in was GONE. Things were flat and 2 dimensional. Some instruments which stand out where you can hear the strings on the instrument and how big it is and how close it is to the mike was turned into a almost inaudible basic instrument. Things lost imaging.

The overall result defined “veil”. It was like there was a thin fabric over the speakers.

I listened to a number of things I know well and all were missing a lot of detail and space.

FLipping to the lightweight solution everything suddenly had air and space and clearly defined 3 dimensions. You could hear each voice in a choir.

This all with the same networking topology and hook up. Both servers plugged into the same switch. Nothing else changed.

WHat I heard sounded like processing going on on the bitstream. Ive heard this effect before. BUT everything looks turned off. So… Im confuzed…

I can hear the echo on her voice in the youtube video with cheap computer speakers, but its gone when i play it thru roon. https://www.youtube.com/watch?v=1SiylvmFI_8