Should I add UltraRendu to my setup?

It’s based on feedback gleaned from the PS Audio forum. Just look in the Matrix SPDIF-2 thread over there.

So when you said:

This is based on what other people have said? Not based on anything technical?

Just to clarify for the OP…

You mean technical like when people prefer the sound of one amp over another even though it has worse specs than the other amp?

You mean technical where people have a preference of one sound over another?

Look, the Bridge II card uses power and creates noise inside the DAC. It makes sense that it might not sound as good. It’s harder to explain why the I2S interface fed by a DDC sounds better than straight USB. It is the most direct interface so it could either way. A bad DDC is probably going to sound worse than USB. If the DDC handles USB crud better than the DAC it will probably sound better. I have no technical data, one way or the other, that proves using the I2S interface is better. But it sure sounds better to the majority of people that have used the Matrix SPDIF-2 (I2S) with DirectStream.

You mean technical like when people prefer the sound of one amp over another even though it has worse specs than the other amp?

You mean technical where people have a preference of one sound over another?

Nope… I mentioned subjective impression is fine (obviously). But when you write:

It may come across as if you know something technical…

But you clarified that it is based on other people’s impressions on a particular thread on PSA Forum.

Just clarifying so it’s clear to the OP.

Look, the Bridge II card uses power and creates noise inside the DAC. It makes sense that it might not sound as good.

I’m not taking sides but subjective observation is, I liked USB sonic clarity much better than Bridge-II in my current setup. I’m going to try Matrix X to see if I2S will make a difference. Another $300+ because I’m still not satisfied with the quality that I hear from my setup.

You will get more from an ultraRendu by itself than from the Matrix by itself. In other words, getting the NUC away from the DAC will get you better sound than using the NUC with Matrix.

This is deviating from tribal knowledge I see in PS Audio thread. They say Matrix with PS DS will be noticeably different. I wish all this was easy to decide

I listen only to streaming music (Qobuz/Tidal). I have a i7 NUC Roon server connected via Jitterbug/USB to PS DS DAC.

I keep reading about UltraRendu (UR) over and over in Roon forum. I fully don’t understand if UR will help improving the quality of my setup.

Qobuz is limited to PCM192kHz (for now).

My favourite input on the DS DAC was (subjectively) TOSlink input. The sample rate limitation wasn’t a problem for me.

I use a miniDSP USBStreamer for USB to optical conversion with a Lifatec glass fiber optical cable. It is bit perfect up to PCM192kHz. You can use Ted Smith’s bit perfect test file to verify. 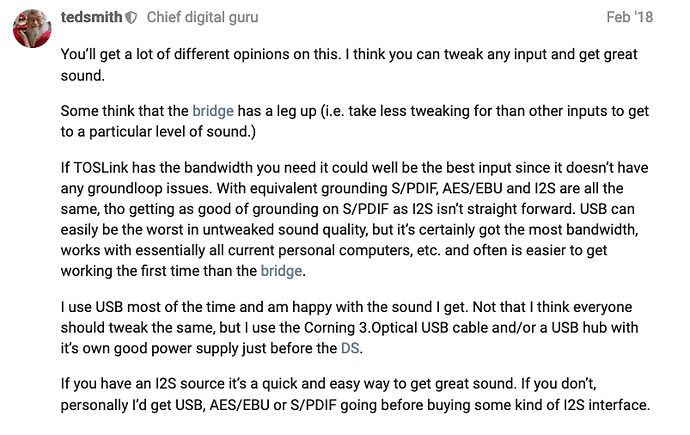 And in case you’re wondering about jitter with TOSlink input, there is no jitter worth talking about. RF related issues (ground noise) can be more of an issue (depending on system) and TOSlink is immune from RF related issues. 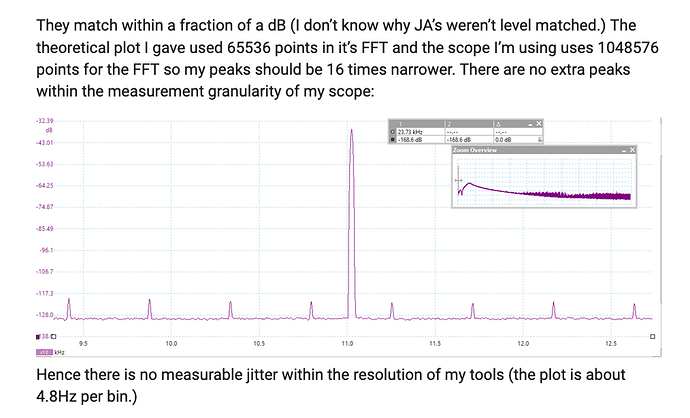 This is deviating from tribal knowledge I see in PS Audio thread. They say Matrix with PS DS will be noticeably different. I wish all this was easy to decide

No, it is not deviating from the tribal knowledge. The Matrix does make a noticeable difference on its own when connected to the DirectStream DAC via I2S. What I am saying is that the ultraRendu (or similar low noise Ethernet device) will have a bigger impact on sound quality than using the NUC->Matrix->DirectStream setup. In other words, I am saying that the NUC->ultraRendu->DirectStream setup would sound better and that NUC->ultraRendu->Matrix->DirectStream would sound best. Isolating the DAC from the noisy NUC is the biggest change.

No sense? Why do you think that adding circuity, via a card, that uses more power to the inside of a DAC would not add more noise?

@karthick_krishnamoor
As this is the internet, people will say all kinds of things (right or wrong). Because this is a forum for people passionate about music, they will say all kinds of things passionately. For stuff like this you just have to spend time listening to it and decide for yourself.
Fortunately, Small Green Computer is a real class act. They offer great products, great service and a 30 day return policy. Try it, and if you like it keep it. If you don’t like it, return it. That is the only way to tell.
[I don’t have any connection to SGC other than having been a customer and have seen how they treat their customers in this forum.]

No sense? Why do you think that adding circuity, via a card, that uses more power to the inside of a DAC would not add more noise?

I can only go by what you write. I can’t read minds (yet).

"Look, the Bridge II card uses power and creates noise inside the DAC. It makes sense that it might not sound as good."

I know Ted is a wiz but I didn’t think he could run circuits without power!

So without clarification, what you wrote still makes no sense to me.

Once upon a time there was a Universal Disc player made by Denon. It was found that European models sounded inferior to US versions. When investigated it was found that the hardware added to facilitate the use [moderated] SCART introduced noise into the player, even when not connected. The fix was to snip the power cables to the SCART board and everybody’s sanity was restored.

In short it is quite possible that a third party add in like the Bridge II might leave something to be desired when compared to the native inputs the DAC was designed with.

As for i2S over HDMI LVDS, all of the good of USB, none of the drawbacks. This isn’t a secret, but some see it as revelatory when they discover it. It has never really been standardised due to some (and PS Audio may be guilty of this) claiming the pinouts of the solution as ‘theirs’ thus discouraging others from going with the same options.

I presently have PS Audio and Rockna solutions in my home with a Topping device also having the connection. I also had a Singxer SU-1.

I had a DirectStream DAC, with the Bridge II, and an UltraRendu. In my first setup, I was using an anthem MRX720. Could not notice any difference from the Bridge to the Rendu.The UltraRendu sat on the side, for the convenience of the Bridge.

Then I upgraded to a Musical Fidelity Primo preamp, and a couple of BHK300. Still no audible difference (regardless the SQ of the system having evolved a lot).

Then I swapped the Primo for a Pass Labs XP30. Life changed. The UltraRendu begins trumping the Bridge. Then I introduced the Matrix, and began using i2s. another very sensible upgrade. All these toys were powered by uptone LPS. Hefty investments. The differences became more significative when I swapped the BHK for Audio Research 160m.

Without meaning no disrespect for the OP system, it seems that the AVM, and even the Emotiva amps might be the SQ weak link. My experience tell me you would be pretty well served from the bridge.

Without meaning no disrespect for the OP system, it seems that the AVM, and even the Emotiva amps might be the SQ weak link.

Spot on! A system (any system) is as good as its weakest link. Any improvements to any of its part it will NOT yield any overall improvements if THAT weak link is still in place

Come on, guys. Any improvement anywhere in the chain is going to help the overall sound quality of the chain. Or do you think a better CD mastering is not going to sound better than a worse one just because the amps or preamps used are not the best on the planet. That’s just elitism.

Yet, that “worse one” is exactly the “weak link”, no? And my comment has nothing to do with “elitism”. Just my experiences

I think you may have a point when there is a large difference between the components. As I myself said, I did feel quite a big difference when I replaced the MRX720 for the separates.

But when the incremental difference becomes more subtle (going from very good - Bridge II - to an equipment slightly better), one may not perceive it should the rest of the chain be up to the task. Thats exactly where the Musical Fidelity Primo failed to show the difference between the Bridge and the Rendu.

CD mastering normally makes a huge difference, because the overall tone balance is often changed (see, for instance, the MoFi version of the Band’s Last Waltz vs. the standard one). A better example would be differences between sample rates. When listening on airpods, 320kps mp3 probably will sound the same as redbook quality. But the differences become quite clear if you move up to a higher end system. And, normally, to really notice the difference between redbook and high-res audio, your system needs to be even better.

That’s my point of view. Really trying not to sound a snob or elitist. I heartfully think he will be better served with the Bridge II, then spending a lot of money on the UltraRendu etc.

I have a microRendu with the SGC LPS, which I purchased primarily to have a Roon Endpoint in a modest 2nd system.
I’ve ended up using the microRendu primarily in my main system (Roon core is on a Macbook which is usually running other apps)
I reasonably sure I’m hearing a sonic improvement but more importantly I can multi task on the Macbook, even using Roon DSP, and not experience any dropouts which I was getting fairly often even without DSP.
Plus I can use the microRendu in Squeezebox mode to stream wirelessly to another system that isn’t a Roon Endpoint.
I feel like it was money well spent. I assume the UltraRendu would be worth it as well.
I tried the Jitterbug and a Shiit “Decrapifer” first and didn’t notice a sonic improvement nor did either help with dropouts . The Schiit made them worse.
And as others have suggested Sonore has a 30 day return policy should it not work for you.

I realize my setup is quite different than yours. My point being that the Sonore gear worked better for me than similar products plus there’s the no hassle return option