Have begun, but not yet concluded, my comparative listening between CD player - as transport only - going into my DAC, and Aries Mini going into the DAC. Same music for both. Both over S/PDIF Coax. I have started though. But as I engaged in this exercise, with the advent of the build 88 release, I find myself compelled to bring something up…

As you may know, with the release of Build 88 yesterday, Roon and RoonServer now support Squeezeboxes. I don’t have a Squeezebox, but there are MANY ways out there for emulating a Squeezebox. I’ve got a Cubox-i4 Pro running a trimmed down Arch Linux running Squeezebox emulation software called Squeezelite. That emulator runs on many platforms, the most popular probably being Raspberry Pi 2’s. Anyway, IMO such devices are now direct competition to Aries Mini’s emulating AirPlay devices, if you are DIY inclined.

Squeezebox does not have the same 16/44.1 playback limitations that AirPlay has, so higher-res playback is possible. Neither support DoP. So native DSD is out*. Though it is my hope that when (if) the Aries Mini is made RoonReady, DoP will be a part of its feature set. But in the interim…

When build 88 is directed to play DSD64 content to a an AirPlay device, it does a sample rate conversion (176.4 to 44.1), then runs the signal through a truncate process (24 bits down to the 16 AirPlay supports), then performs a dither process (stated as removing artefacts from the prior DSP) and then send that 16/44.1 signal on to the AirPlay device. That’s what happens to me when I play DSD64 tunes through my Aries Mini. But the Squeezebox is different.

When the same music is directed to a Squeezebox (or in my case, something that Roon can’t tell is not a Squeezebox), it performs does a DSD to PCM conversion (DSD64 to 176.4 kHz) then passes the signal straight to the Squeezebox. And let me tell you, the difference is “sit up in your chair and listen” significant. I tested those differences last night listening to Patricia Barber’s Café Blue.

Granted, the intent of this thread is to evaluate Aries Mini as an endpoint, once (if) Auralic makes it RoonReady. In the interim anyone with one has to use it as an AirPlay device. If that’s where you find yourself, AND IF you have DSD content you want to listen to, based on my limited listening experiences, I’d strongly encourage you to look at one of the Squeezebox emulation options as a potentially sonically superior alternative.

Just to note the Squeezelite does support DSD streaming and LMS 7.9 does correctly scan native .dsf files for metadata and streams them natively to Squeezelite, which converts such streams to DoP before output. Squeezelite must be started with the -D flag in its command line to enable DoP streaming, but when this is done you have a bit-perfect DSD path from your .dsf (and .dff) files to your compatible DAC.

Just to note the Squeezelite does support DSD streaming and LMS 7.9 does correctly scan native .dsf files for metadata and streams them natively to Squeezelite…

Indeed. And that’s how I normally use Squeezelite. However I did not mention that, because it’s moot to the Roon user audience.

When using Squeezelite (regardless of platform) with Roon, Roon then takes the place of LMS. And whether or not you used the most recent version of Squeezelite, with the -D option, Roon is not going to send it native DSD files. Or at least build 88 won’t. And if Roon Labs holds to the “no Squeezelite - only Squeezebox” support policy, I’d be surprised if we ever see that change.

I beg to differ on the basis that DSD streaming to Squeezelite clients works for me. 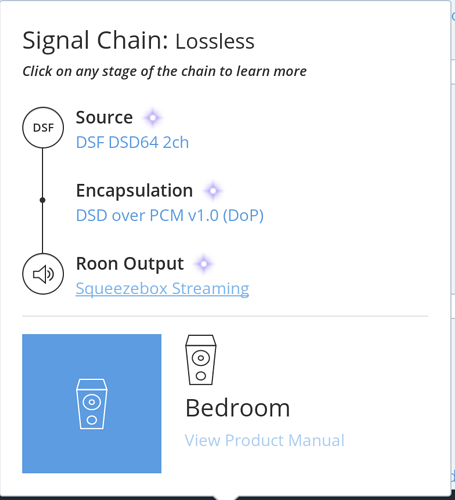 Not officially supported, as you say, but working nonetheless.

Awesome! Thanks for posting that!

Not sure why it’s working for you, and will not for me. If you don’t mind, I’m going to send you a PM. Maybe you can help me figure this out.

That is - when time allows. It IS Christmas Eve.

Somewhat in awe of the Product Manual for the Bedroom

Somewhat in awe of the Product Manual for the Bedroom

LOL! There’s a little Christmas Cheer for you.

Since we’re playing Show and Tell, here’s what I get when I try what Charles has done successfully… 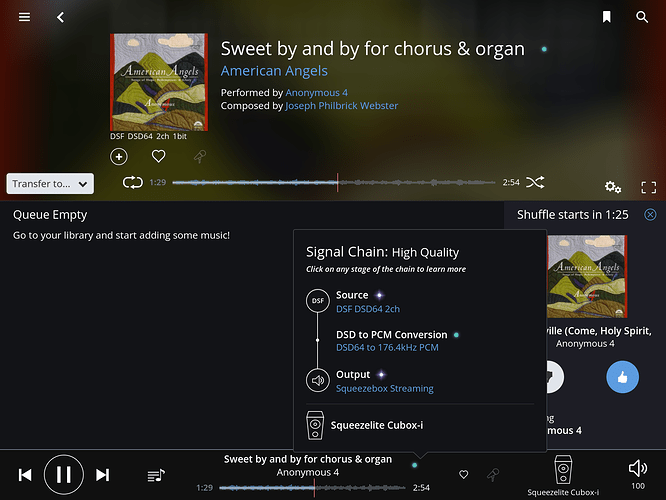 I’ve got a bit of tinkering to do… See if I can get to the bottom of this before bothering Charles.

@Andybob - since you are following this, could you please spin the Squeezelite portion of this thread off to new/different thread? It bears an open discussion IMO, but is technically a bit OT here. Yes, I know, I started it. I just didn’t think it would get so involved…

Thanks. And Merry (or Happy) Christmas and Happy Holidays to all!

[quote=“scolley, post:8, topic:6099”]Could you please spin the Squeezelite portion of this thread off to new/different thread?
[/quote]
Done,
Regards Carl

And thanks to Carl for moving these posts from my blog thread!

Since I was pretty positive I had my Squeezelite set up correctly, and seeing that it still was not working correctly, I was afraid it was going to take a lot of sleuthing to figure out what was wrong. Fortunately, I was wrong about that.

@Charles_Razzell was kind enough to send me a PM with lots if instructions and pics. He had no way of knowing I had my Cubox-i setup correctly, so it was a nice thing to do. Thanks Charles.

However, his instructions had not just Linux instructions, but Roon setup instructions too. Huh? There was no setup on my iPad. Just give the zone a name, and select for play. Zero configuration ability. But Charles had the little gear icon, allowing him to specify DoP for his Squeezelite player. And that was it.

I had been doing all configuration on my iPad, which is not yet updated to the latest build, due to the notorious Apple App Store delay. And the old version has no gear to configure a Squeezebox zone. It just takes a default, which is not DoP. But my wife had a PC, that I rarely touch, but used it today to install Roon build 88. And in that the gear to configure the Squeezebox zone was present, I set it to DoP. And now it’s playing native DSD files! Woo hoo! See below. 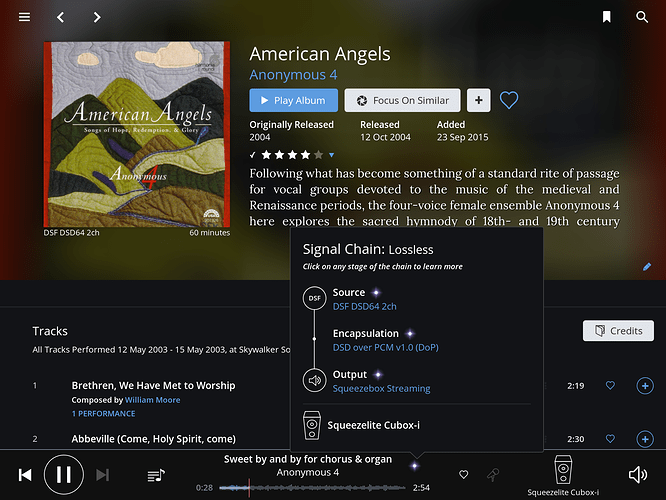 So the mystery is solved! Can’t configure a Squeezebox zone on a pre-build 88 iPad app. Shoulda figured…

Thanks again for the help Charles! Mystery solved.