Sarcasm or ignorance…can’t quite tell.

I’m all in on sarcasm.

Its feature after feature that people ask for a fixed release date.
So I thought a little sarcasm might be entertaining.
But I am not sure neither.

I just completed my two week Roon trial and I like it a lot; There’s definitely room for improvement,
but I signed up for a year and I look forward to future enhancements. However, I’ve been experiencing the same problem reported in this thread. On some albums or songs there is either distortion, a digital skipping noise or both. I suspected it might be DAC/MQA issue, but find it annoying because Roon doesn’t identify the media as such. Am I overlooking something obvious? For example,when searching for “Mud Slide Slim” two albums are displayed. The first one plays fine on my system, but the second one is distorted. Unfortunately, the second one isn’t marked with an “M” so I have no way of telling if it will be compatible with my DAC until I play it. This is particularly annoying when saving songs to a playlist and later finding out they’re distorted. However, if I search for the same album on Tidal’s site, the first album is marked “M” and the second is not. Both albums play well through my system. My setup is: MacBook Pro (server) > USB cable > Simaudio 280d. I can live with the digital distortion until Simaudio comes out with an MQA hardware upgrade to their DAC, but in the meantime I’d like to know if the album or song I chose is in MQA or not. Is there a Roon setting I’m overlooking?

No Roon does not currently identify if Tidal albums are MQA or not until you play them.

If you have local MQA albums they are identified as MQA.

This is particularly annoying when saving songs to a playlist and later finding out they’re distorted.

Undecoded MQA files (typically 24/48 FLACs) are compatible with non-MQA DACs, so I’m wondering if there is another issue here. MQA files need a little more bandwidth than normal CD quality FLACs. What’s your internet connection like? Is your Mac on Wifi or hardwired to the LAN? If WiFi as a test could you try hardwiring.

I suspected it might be DAC/MQA issue, but find it annoying because Roon doesn’t identify the media as such. Am I overlooking something obvious?

@philr is correct. I hope this is a temporary situation, but as a workaround, you could determine whether an album is MQA by playing it and looking at the signal path (as of Build 242 the MQA info will show there) and then tag the album in Roon as MQA. (As I say, I hope this is a temporary situation — I really hope Roon will come around to using something like the Tidal desktop app’s M-in-a-square badge.)

From my own speculation based on the Build 242 release notes and various comments posted here, I think MQA versions of Tidal albums may be causing more problems with some systems than others. None of my hardware is at all MQA capable, and while I haven’t tried to play a lot of Tidal MQA albums, I haven’t noticed any obvious problems with playback on the ones I’ve experimented with.

I’d like to know if the album or song I chose is in MQA or not.

When playing a Tidal track, if you click on glowing signal quality indicator dot … it will open up the signal path window… on there you can see the audio file format.

I’m hoping one day a Roon will be able to display this for Tidal albums / tracks before playing. 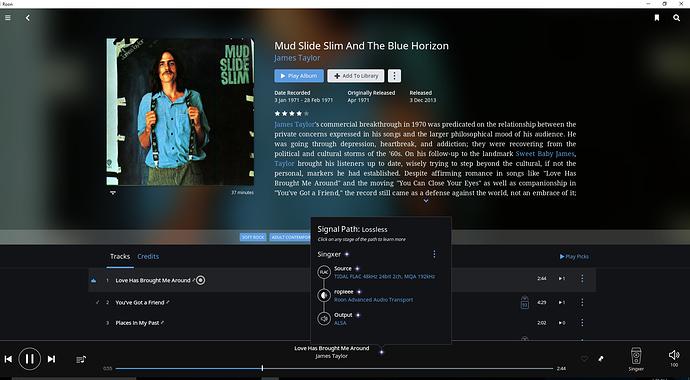 My playback path is hardwired and I can play both albums (44.1khz/16 and 48khz/24bit) without issue.

Nice DAC by the way. 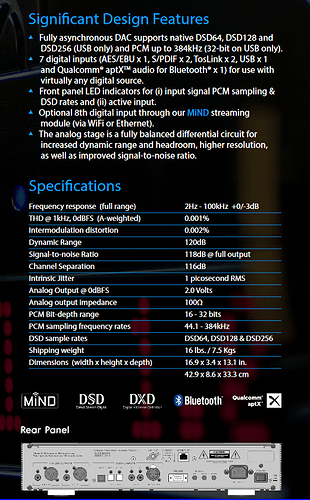 Thanks to everyone for responding. My suspicion has been confirmed. Until Roon adds this as a feature I will continue to check the glowing green button. No need for anyone else to reply. By the way, my internet is 10/100 and the DAC is hardwired. I’ve tried ethernet and WiFi on my MacBook Pro with similar results. I’ll look into this further. Thanks!

What DAC is that?

Hi, if you have a glowing green button you are listening at reduced capability. Something is down sampling or reducing/limiting bit rate. You need to be aiming for a purple light if you want to pass through MQA unmolested. I suspect that this is also linked to the distortion you hear because MQA should sound perfectly OK.

Simaudio is above all else a team of music enthusiasts. Our exceptional high-quality audio amplifiers and sound systems are made in Canada since 1980.

My SimAudio 280d DAC is Roon tested, but not MQA compatible. However, it’s my understanding Sim is going to offer a hardware upgrade to resolve this in the near future. In the meantime, I get annoying digital distortion, when I play a Tidal MQA disc/track through Roon and the 280d. Here is what Roon displays when I play an MQA track: 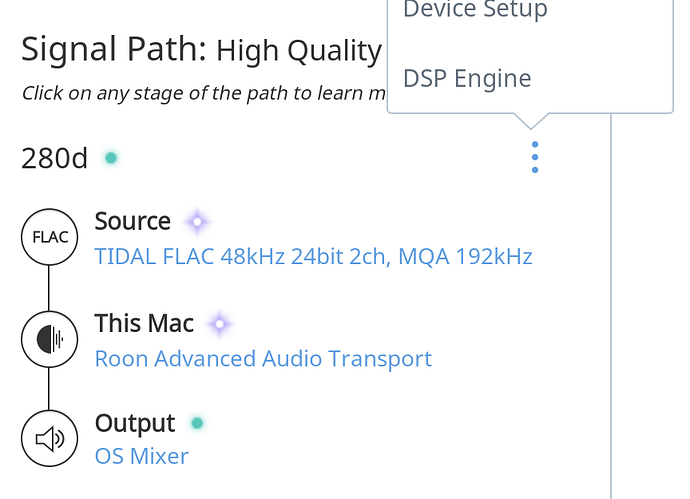 I’m not sure, but I think you need to be in Exclusive Mode.

Where is the "Exclusive Mode" setting in 1.3? HQ Player

It’s on the “Playback” tab on the “Device Setup” screen: [image] Note that the idea of exclusive mode doesn’t apply to all devices: “System Output” is never accessible in exclusive mode. ASIO and ALSA are always in exclusive mode, so there’s no setting to flip. The concept of “exclusive mode” doesn’t exist for hardware devices…squeezeboxes, sonos, Roon Ready, Meridian, AirPlay, etc. See also: http://kb.roonlabs.com/Exclusive_Mode

I switched to “exclusive mode”, but it had no effect. Thanks though. I’ve sent an email to Simaudio and plan to contact Roon too.

Awesome! Will check it out.

In your screen cuts, you have chosen System Output. Try choosing the actual SimAudio Device instead and see if that makes a difference. Screen posts of your Audio Settings would be helpful.

Choosing the actual SimAudio device fixed the problem and I can now play MQA albums/tracks. Thanks! I’m not sure how I got my DAC to appear (didn’t see it as a choice before), but it’s displayed now and once I selected it, I can play MQA without distortion. Exclusive mode is also disabled. Although my DAC (280d) isn’t MQA compatible (yet), is there any improvement to sound quality if I play MQA albums/tracks through it? It sounds pretty damn good!

MQA albums, even un decoded should sound equal or better than CD due to the studio de blurring. That’s as I understand it.