You should be OK - @brian was talking for libraries even bigger than yours, and before circa 2018 optimisation work.

Opinions and official recommendations will vary on this but I can only offer up my personal experience with my two Synology NAS. I have the DS918+ and the DS718+. Both have identical CPUs and I’ve run Roon Core on both NAS with no issues. As an aside, before going NAS I ran Roon on my Mac Mini (2012) i7 quad-core 2.6GHz, 16GB RAM, and two 1TB internal SSD.

As hard as I have tried, I have never hit 40% CPU utilization on the NAS and that’s with various DSP settings enabled including sample rate conversions PCM to PCM 352.8KHz and PCM-DSD up to DSD128 (the most my DAC will handle), parametric EQ, headroom management, etc. Is there a setting that will exceed this? Probably. But here’s the interesting part. If I play straight PCM or straight DSD with no DSP functions enabled (how I normally roll), CPU utilization is literally around 1% to 5%.

As for navigating the library and swiping through album art running Roon Remote on the iPad, I’ve had no issues there either. So for me, I have no issues at all running Roon Core on my modest Synology NAS. My “end-point” network streamer is the Sonore microRendu. DAC is PS Audio NuWave DSD DAC. YMMV. 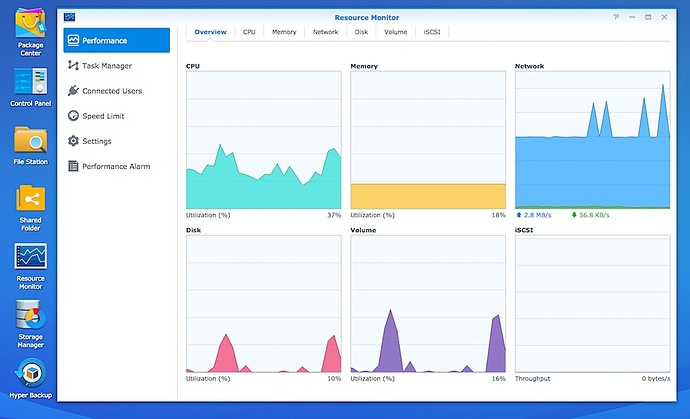 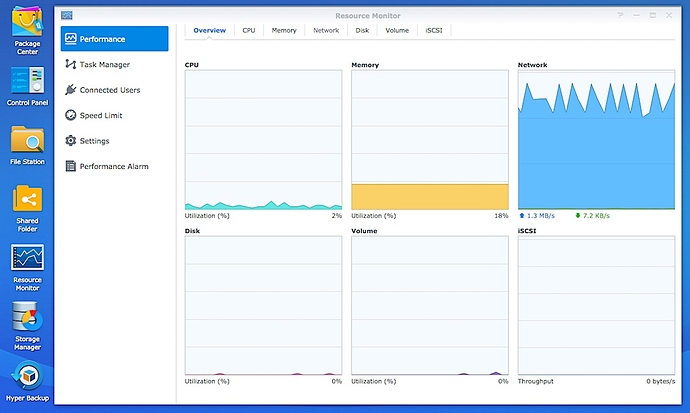 its Albums not tracks my friend…one issue at the very start will be analysing 25,000 albums full of tracks and this will bog the system down for days maybe weeks at the same time rendering it a very slow platform for searches and stable playback IMHO.

You’re right I misread it. But still a data point for others with smaller collections. For my measly 12,000 tracks (about 1000 albums) it made no difference running on a modest Intel Celeron J3455 based NAS with no SSD vs Intel i7 quad-core Mac with SSD.

Im running 300,000 tracks on a 1813+ and while its all been updated and imported from a faster machine backup it does work. that said I don’t use it as a daily driver. there is no SSD and systems runs on 8 x 6TB SHR 7200RPM drives. its not zippy but its tolerable for playback of non upsampled, non DSP’d options material.

while once could start with a suck it and see…its well below what is recommended.

Just to add to this, as I am running exactly this setup (8gb Ram) with a 34,000+ library and I have no performance issues at all.
If your father already has this set-up then it has got to be worth trying.

I run a similar sized library to the OP and use and i7 NUC for core. Files are stored on a USB 94xHDD) caddy and backed up to a Synology DS1813+. I can swap the store and backup around but find the use via USB quicker and also better to avoid the failing of the NAS SMB file monitoring.

The NUC can be a bit noisy but it is out of the way in my setup. Looking at cooler devices would be good but not essential depending on where it sits.

Nick, what do you mean by “failing of the NAS SMB file monitoring”? I don’t think I’ve ever run into this. If I add albums to the NAS, Roon recognizes it. And playback always works.

As wizardofoz mentioned the file analysis time on a large library can be quite long with the Celeron processor and no SSD in my NAS. Although my library is a relatively small 1000 albums, it did take a couple days for the analysis to complete in the background, but that never hindered my playback. And adding new albums takes only a couple minutes tops.

Nick, what do you mean by “failing of the NAS SMB file monitoring”? I don’t think I’ve ever run into this. If I add albums to the NAS, Roon recognizes it. And playback always works.

inode watches of remote mounted filesystems is wonky at best. So if you add new content to the NAS, Roon may not immediately recognize it. However, Roon also has a configuration setting for how often it should do a manual scan. (I forget what it defaults to… 4 hours?) So even with network mounted shares, it will eventually notice them. But it probably won’t be immediate.

I guess I should feel fortunate here. This is exactly the setup which I am using with the exception of 32GB of RAM installed and recognized by DSM, and an external SSD for the Roon Catalog service.

I have nowhere near 25,000 albums, although I have a mix of FLAC, MP3 and DSD being served by Roon, as well as having hundreds of MKV files being served by the PLEX running on it as well.

Is it simply the fact that I don’t have a huge database with lots of metadata? or have I just been fortunate here.

Either way, very happy with my Roon setup.

Compare to a directly connected drive the monitoring of files changes, meta tag changes etc via NAS SMB is very flaky. The Roon team know this and for a while considered trying to build a fix for the poor SMB. That really out of scope for them and opens a can of worms for support. It’s the port implementation of SMB on the NAS.

If you don’t make file edits etc then it’s no major issue. You can just rescan the whole folder as and when required.

With a directly connected disc then ALL changes are real-time. I preferred this when I was doing a lot of library grooming.

Bonjour, Jean Claude,
maybe I am a bit late with my response but I feel the urge to add my two cents worth…
First, I have a collection of about 12.000 albums, many of them in HD (24/44.1 … 24/192) and about 400 in DSD64 format.
Several years ago I started with a synology because I liked the idea to centralize my „IT environment“. That was before Roon stepped into my life.
With the advent of roon I was suddenly able to stream HD data to all my home devices like receivers, smart devices and lately special roon endpoints.
With HD files streaming and on-the-fly conversion the synology reached its limits and problems like dropouts showed up frequently. Same thing with concurrent streams to different end devices.
So, 18 months ago, I had to decide how to proceed. First of all I purchased an Intel NUC with Intel i7 and some cheap 64GB SSD and installed ROCK on this device. No problem to mount the audio data shares of the Synology NAS on ROCK. Problem solved. This setup has been happily serving all kinds of HD files, even concurrent streams, for over a year.
In the mean time a friend of mine experienced a crash of his Synology NAS and neither he nor experienced service engineers were able to rebuild the system. He had to purchase a new NAS with new disks because he did not trust the old ones for new run. Data restore from his backup disks took him more than two weeks because the disks were USB2 and he had to do everything manually.
His experience led me to a second decision regarding the future of my NAS and data backup:
The Intel NUC has a very potent processor and 2 (4) x USB 3.0. Why not simply adding one or two high capacity USB-disks containing all music files?

This is what I did. I purchased two WD Red 8 TB drives plus USB enclosures, copied the music files, configured the new path in ROCK and - mission finished.

Nobody needs a NAS with RAID-levels originally created for simultaneuous access of hundreds of processes for one or two sequential file streams!

This setup saves me lots of energy, electrical energy, and my own energy. Electrically it will put the disks to sleep mode after 5 minutes with no access, and the ROCK is switched off by yours truly when going to bed (btw., sleep mode is a long requested desiderate to the developer of ROCK, can you hear me?).

Speaking of my own energy, backup process of two USB disks is as simple as a disk duplication, or a full copy, or some diff copy, as you like it… Makes me sleep a lot better than the prospect of a defunct NAS.

Hi Geefes,
I understand your point of view, but do not share your conclusion.
A NAS should never be seen as a safe storage. It has aspects that might be better than a regular hdd, but it also adds mechanisms that might fail. So, I agree that there should always be a backup.
In my case I am syncing all music files to a cloud storage and to another NAS.

Nobody needs a NAS with RAID-levels originally created for simultaneuous access of hundreds of processes for one or two sequential file streams!

I am not sure I get your point here: So, it is bad, because it was originally created for far more than Roon needs?

This setup saves me lots of energy, electrical energy, and my own energy. Electrically it will put the disks to sleep mode after 5 minutes with no access, and the ROCK is switched off by yours truly when going to bed (btw., sleep mode is a long requested desiderate to the developer of ROCK, can you hear me?).

Speaking of my own energy, backup process of two USB disks is as simple as a disk duplication, or a full copy, or some diff copy, as you like it… Makes me sleep a lot better than the prospect of a defunct NAS.

Maybe that’s my personal preference, but I try for myself, to exclude everything that I have to do manually. For me Roon needs to be available without having to turn on a specific device. Same thing applies to the backup process (or sync to the cloud storage). It should happen automatically, so that I won’t need to take care of it.

But the relevant question in this topic is about the performance of the NAS. Many NAS do not deliver the recommended specs for Roon, which might still be fine for many users, because they might not use all of Roon’s features (especially DSP).

I recently moved my 45k song Roon server from a large Xeon machine to a Synology RS2416+ with 16GB RAM. I was hoping to save electricity and reduce the amount of hardware in the house.

It was a frustrating and slow experience with browsing of the library and streaming all having multi-second delays.

There is zero chance anything other than something from the Synology XS range with SSDs for the Roon package will handle a collection with 25k albums.

You’re well into funny money territory with such a setup so I would recommend instead what I now use. An Intel i7 or i5 NUC with at least 16GB of RAM and a fast M.2 SSD. You’ll have to ask the Roon guys what size of SSD they’d recommend for that number of songs.

The NUC is cheap and about 4x faster than the most expensive DS+ or RS+ NAS In Synology’s lineup.

You’ll still need a NAS but with a NUC handling Roon your Synology will be able to dedicate all its resources to serving files.

These boxes are storage devices first and foremost not clown cars. It does no good to stuff everything onto them.

I have about 14,000 songs and a DS 916+. I initially used the NAS to run room but the performance of ROON was mediocre. After a couple of months I got a NUC i5, which was a massive improvement.