Hello, when looking at an album (and playing) in Tidal OS many more tracks are available. When in Roon, there is more Unavailable tracks. See below example - Tracks #2, 4, 6 are Unavailable in Roon but available in Tidal. Album Paolo Sorrentino - Music for films by various artists.

Do you know why and if this can be changed? 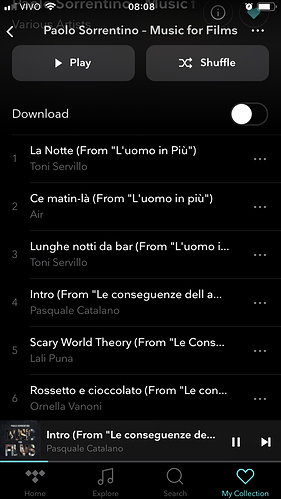 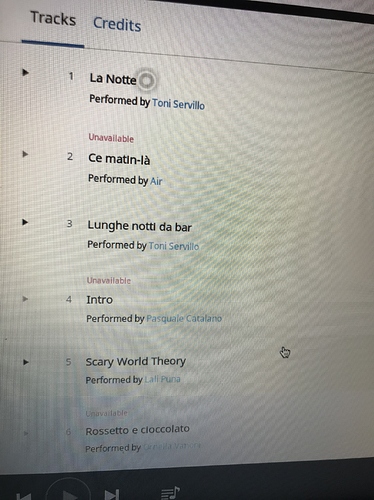 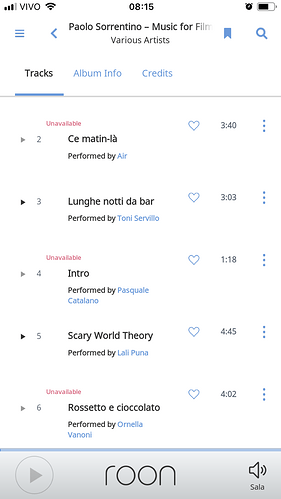 We are looking into this. We’ll be sure to let you know when we have more information available. Thank for the report, we appreciate it!

@support There are quite a few bands/albums that show up differently in Roon compared to the native Tidal app. Bands with “The” in the title, I notice this a lot with.

It’s listed in TIDAL as:
“About Time”
Various Artists

I’ve added the album as a favoritein TIDAL, with none of the individual tracks favorited. Two tracks that show as available in Roon but will not play in Roon are:
Gold In Them Hills (Album Version) by Ron Sexsmith
Into My Arms by Nick Cave & The Bad Seeds

When I try to play those 2 tracks, Roon displays the message, “TIDAL: This track is not available from TIDAL”

When I go into my TIDAL app and play the songs from the album display, they play as expected.

@support
I’ve got the same issue with Lady Bird - Soundtrack from the Motion Picture.

The second track, Hand In My Pocket, is available in Tidal but not in Roon (see screenshots) 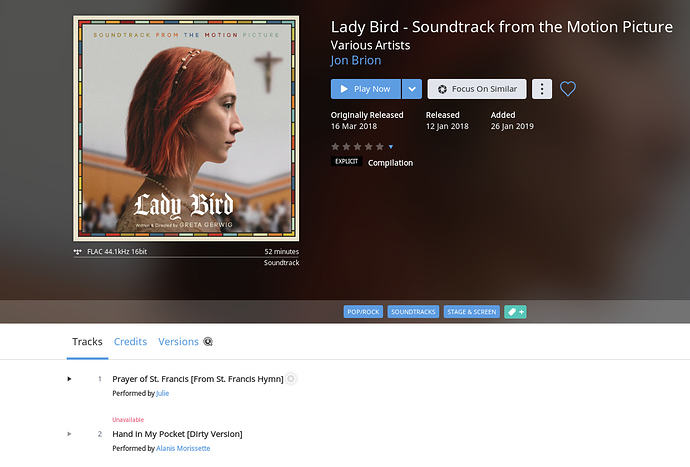 We are currently working with TIDAL on a solution for this. You can read more about this where it was discussed here.

Is this still an ongoing issue? I just came across some brand new tracks that I wanted to listen to on Roon and they are showing as unavailable. They work just fine on the Tidal App and browser based playback as well. Only seems to be an issue using the Roon Client.

Not sure if this is related, but I’ll add a given track to a playlist (not adding to library), and over a period of time, play it numerous times. Then, the track and album become “unavailable”, yet when I search for it in Roon again, I’ll find it and add it again. This is happened to numerous tracks and I’ve noticed that on some, it’s been the same artist/album/tracks.

If you mean recently released tracks there is a delay in synch whilst Tidal adds the metadata and sends them in batches.

Tracks are unlicensed removed by Tidal/Qobuz and relicensed again. So they disappear from playlists but can be found by search.

It is and is the downside to streaming. I have had tons of albums of late in Qobuz that Roon says tracks are unavailable. I search and find another version of it.add it and delete the old one. I think they must be changing metadata or as Ged says the license has changed. In Tidal the albums just disappear if they change anything. Not sure which method is better as both annoying. It’s been mentioned a lot that Roon needs a better way of managing these changes if it’s possible.

The pitfalls of not owning the album - you rely on the quirks of the particular streaming service - adding & removing albums!

I went to one of Qobuz’s own playlists “an artist recommends” and a lot of those tracks were unavailable - this is on an official qobuz playlist. if they can’t manage their own…

Another bump. Juno- Mucis from the motion picture shows several tracks as being unavailable in Roon. All of them are available on the Tidal App. This thread started in Dec 2018. Can someone help?
I’ll post this in support as well.

I also continue to have issues. Roon does not include albums added in Tidal, but Tidal does add those added in Roon. Really tired and sort of given up.

This morning Tidal albums and songs in my queue show up as unavailable yet show fine in Tidal app itself. Was working fine yesterday

Hi Roon, @dylan - I’ve been wondering this since signed up for Roon. There are lots of examples I’ve come across but just assumed they also weren’t available on Tidal until I saw a few I definitely knew were. Have cross checked and was able to play them via the Tidal app. Latest example is the Ezra Furman ‘Sex Education’ soundtrack - see e.g. the song Queen of Hearts (playable on Tidal but not via Roon).

I just experienced the same. One track on album says “Unavailable” but track shows in Tidal app and plays just fine. 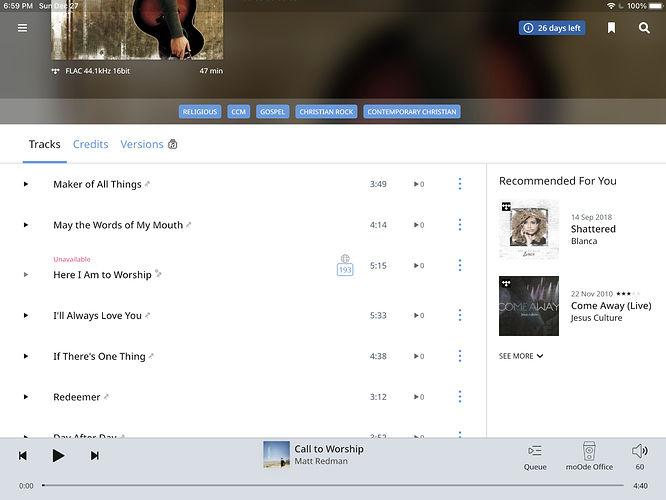 @support Here is another. Plays just fine in the Tidal app, but one song shows "unavalible in Roon… 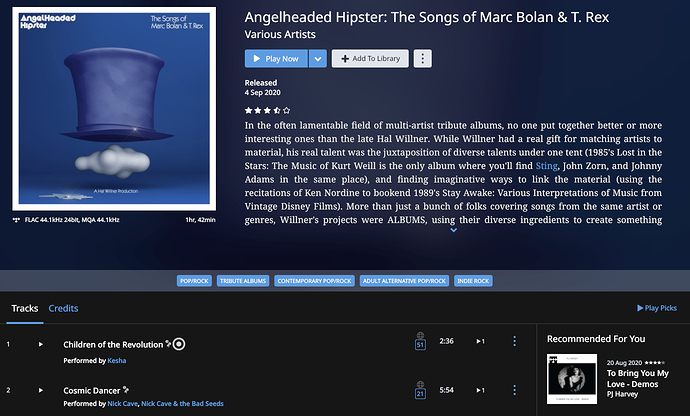