You can find current list of supported formats in the Roon Knowledge Base.

So just to clarify: No support for DSD formats (i.e., DSF and/or DFF)?

DSD support is in the works, but I don’t think it’s going to be included in the initial release. It’s not ready yet, and we’re running out of days to get it into a mature state.

DFF is a bit more complex. It was designed as a studio format more than an end-user distribution format. It supports non-destructive editing features that can result in content for a single track being spread across many files, and does not support metadata tags. All of these things increase the complexity of DFF support.

We firmly believe that DSF is the best DSD format for end-users going forward. That doesn’t mean we will never support DFF, it just means that DSF is being prioritized.

As always, we will remain open to feedback on this stuff.

It’s great to hear you’re going to support DSD. DSF only is sufficient for me (but be prepared for folks to demand that you support DSD .iso’s).

Is this a preference of DSF over DFF, or are you saying that DSF is preferable to FLAC? Presumably DSF will not work for anyone with an endpoint that cannot handle DSD codecs, as I assume Roon servers will not transcode DSF on the fly.

I moved 10 posts to a new topic: DSD ISO Support

Is this a preference of DSF over DFF, or are you saying that DSF is preferable to FLAC?

No. I was only comparing DSF and DFF in that comment.

I moved 11 posts to a new topic: Monkey’s Audio Support

I just searched (using Google) for what formats Roon supports and found that someone else had asked the same question before https://community.roonlabs.com/t/what-audio-file-formats-are-supported/318. S/he was directed here https://community.roonlabs.com/t/what-audio-file-formats-does-roon-support/110 but when I followed this link I was first told to login and after I did so I got a screen telling me “Sorry, you don’t have access to that topic!” Surely the formats issue is not something you would want to hide from your users? 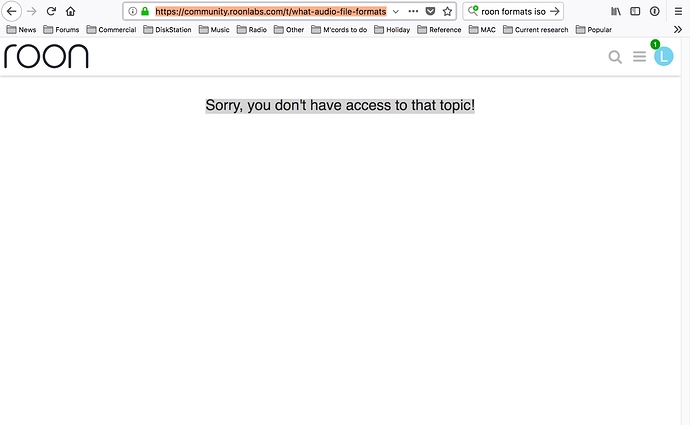 I think it is a broken link, the supported formats is certainly not a secret, was there a specific format you were interested in?

The secret format page is accessed by typing “supported formats” into the Roon KB search engine:

Thanks, that answers my question (no support for ISO).

I’ve updated the broken link to reference the Roon Knowledge Base.

@support,
Is support for DSD within the .WV -format coming soon?

Hi @Michael_Vinberg ---- Thank you for the post and the question! My apologies for the delay.

Moving forward, I touched base with members of both our tech and DEV team today to get some feedback regarding your question. The team has indicated to me that we do not have any plans at this time to support DSD content in the mentioned “.WV” wrapper.

However the team did recommend opening up a feature request so we can gauge the demand amongst our user base for this file format.

All the best,
-Eric