Perfect, then screenshots, observations about storage settings, and logs

With the 1.3 core restarted using the saved 1.2 dB, here are screenshots of what happened: 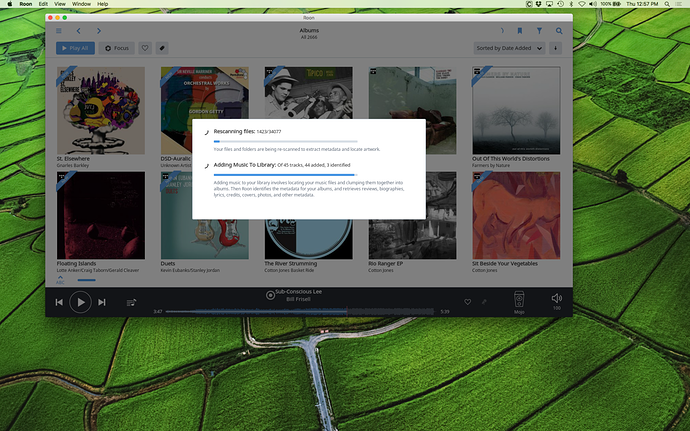 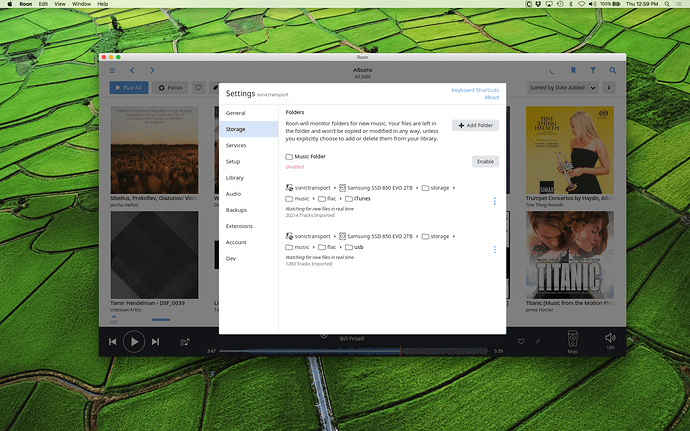 There was a Music Folder in my settings-storage which was “Disabled” from when I was messing around prior to this restart. I noticed a lot of music missing. I therefore Enabled this default folder that 1.3 showed, and 6500 tracks were added. 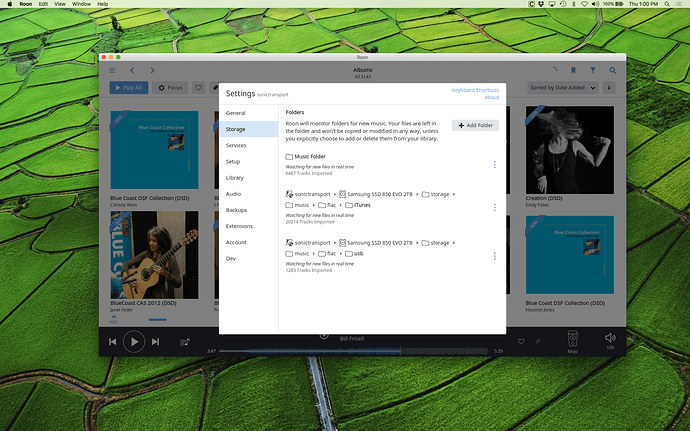 Currently Roon is rescanning 40,564 files which sounds about right. But the rescan has not preserved my metadata edits from before, or the Date Added from before. 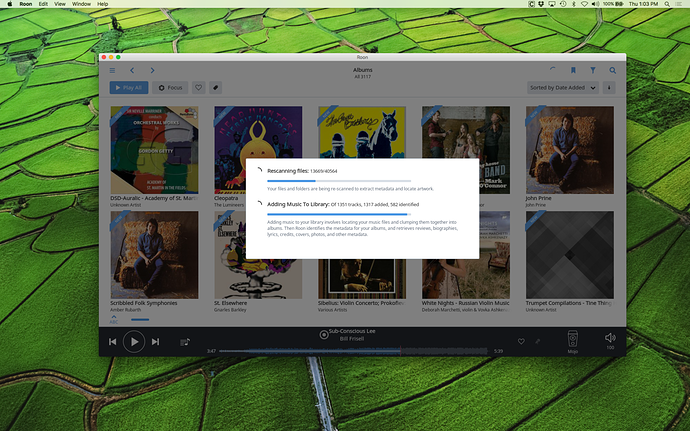 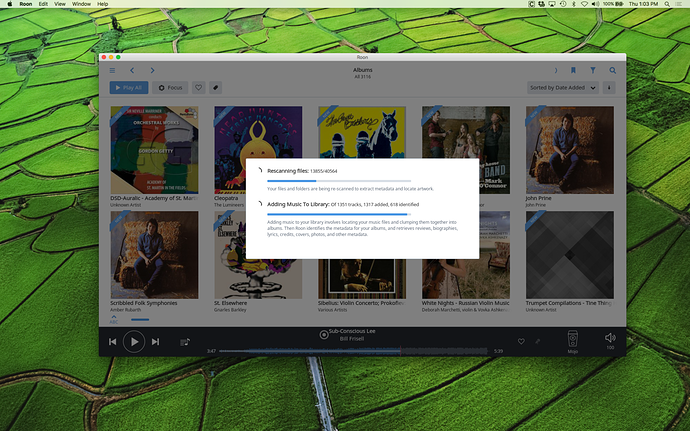 Here is a copy of my Logs file from just now

ok, i wish you hadnt hit enable… but let’s see if the logs still help us out

Well originally when I first updated to 1.3 the Music Folder in Settings was enabled! Plus the two Watched Folders you saw in my screenshot.
If I disable the Music Folder that was there when I started the 1.3 core, then I only have 2666 albums and 32,434 tracks, as opposed to 3073 albums and 36,761 tracks with it Enabled.
And I could see that a lot of my music was missing. Most of what was in there were Tidal albums, not my own.

After the update my watched folders was disabled. So when I enabled it, everything scanned from scratch (rescanning). Not the end of the world but it was annoying to have the recently added order messed up. We’ll get over it though

We think the reason the import dates are messed up is that the iTunes and usb folders are inside the Music Folder which causes duplicates that are messing up the import dates.

Here’s what I suggest:

First try adding “/iTunes/” and “/usb/” to the ignore paths for the music folder. Select the 3 dots menu for the “Music Folder”, then “edit” and copy this into the ignored paths thing circled below, without the quotes: “;/iTunes/;/usb/;” 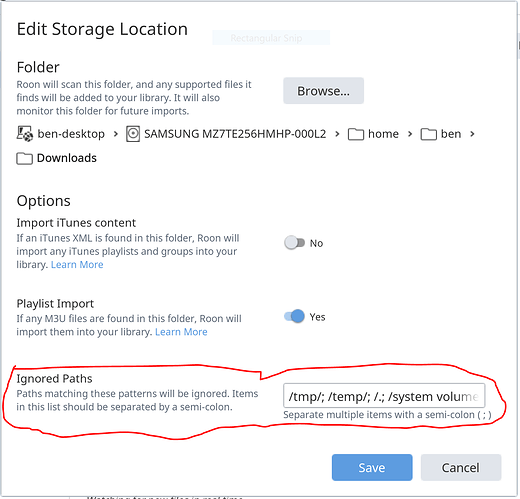 We also have a fix for the bug that caused this to come up as disabled after the migration, which should be out with our next release. Ironically it coming up disabled by default is helping you here, but it really should come up enabled.

The “ignore” edits seemed to do the trick. Not sure I have all my music but all the Recently Added is there and correct. Can’t remember the 3000 other albums before the Recently Added! Tell me again why my system didn’t work correctly? Have I loaded my music incorrectly into my Sonic Transporter? I have 2 TB SSD drive in the STi5 that is at 1.8 TB so I recently plugged in an external USB drive as well and successfully mounted it on the STi5. Do I need to correct my music storage paths? If so you’d better be as explicit as you were in this email, which I could follow perfectly.

We put every release through extensive testing, by our internal QA and by our tireless alpha testers and moderators. Unfortunately, a bug does occasionally make it out the door, especially with a release as complex as yesterday’s. We have identified a bug in the initial 1.3 release (Build 193) related to Linux devices using internal storage. The fix is in place and has now been released as Build 194. While we don’t anticipate any long-lasting effects, there will be some some minor inconvenienc…

Did the update, had to choose the right path for my music, seems to have loaded all my music, but all the metadata and Date Added from 1.2 are gone–again. Should I have skipped this update?
Or do I just delete my 1.3 dB and copy over the 1.2 dB again?

Hey @Sarah_Clement – thanks for your patience on all of this. I think we’re nearly out of the woods

I think we have a pretty clear understanding about what’s gone awry here, and I think the fastest way to get this all stable is probably to copy over the 1.2 database to start.

Once you do that, I’m 99% sure I know what’s going to happen, but I’d like to confirm before I advise you on the next steps-- can you put the 1.2 database in place, update to the latest version, and let me know what content you’re seeing? A screenshot of your Storage tab (in Settings) at that point will also be really helpful.

Transferred my 1.2 dB over again, and will send screenshots when it’s done. Thanks again for all the help.
After the restoration of the 1.2 dB I am seeing most of my music, I think, but the Date Added is still messed up. Whatever.
And look at my Storage page now! It’s gone back to where it was the first time I downloaded 1.3. This ain’t right is it? 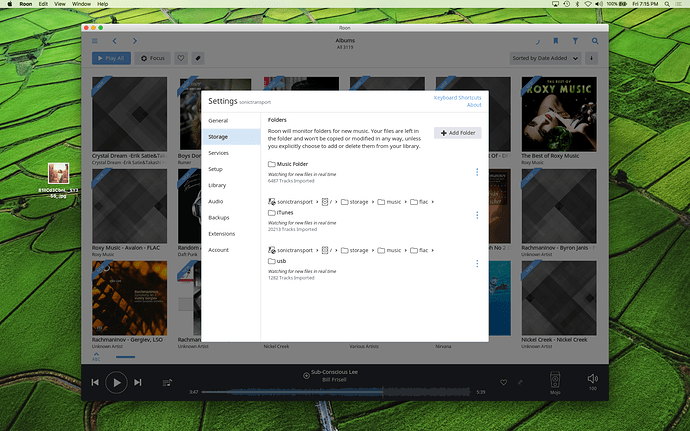 First, click the “3 dots” menu next to all three folders and select Disable.

Once those are all disabled, click the “3 dots” menu next to the Music Folder, and click Edit.

In the windows that pops up, there should be a section that says Ignored Paths. The items in that list are separated by semicolons, and I want you to only remove the reference to iTunes, ok? Then hit save. (If you’re unsure what to remove, just drop another screenshot here).

Once that’s done, re-enable just the Music Folder. If that works as I’m expecting, all your edits and import dates should come back. Leave the other two folder disabled, or better yet, remove them from Roon entirely.

Done what you suggested and the circle is spinning; so far only 1395 albums of 3400 or so but it’s still going. Maybe? Maybe? this will work?

Sounds like you’re on the right track. When it stops spinning, let us know how it’s looking ok?

3054 albums, looks good, the Date Added is not really correct but it’s not insane like it was the first time I updated to 1.3. One problem has persisted–several albums have mixed up artwork. In Album View, some albums have the wrong covers. But when I click on these albums, the large top panel has the correct album cover. But the thumbnail on the right hand side is still the wrong cover. I have gone to Edit and changed the artwork and selected to use File not Roon, and Saved, but as soon as I go back to Album View it has reverted to the bad cover. I have no idea why this happened, but it’s affected about 10 albums and no matter what I do I can’t get the correct artwork to stick even with multiple tries at the Edit/Save field.
Screenshots below–the three albums on the bottom right (Coming Home, John Prine, and Amber Rubarth) have the wrong cover art. 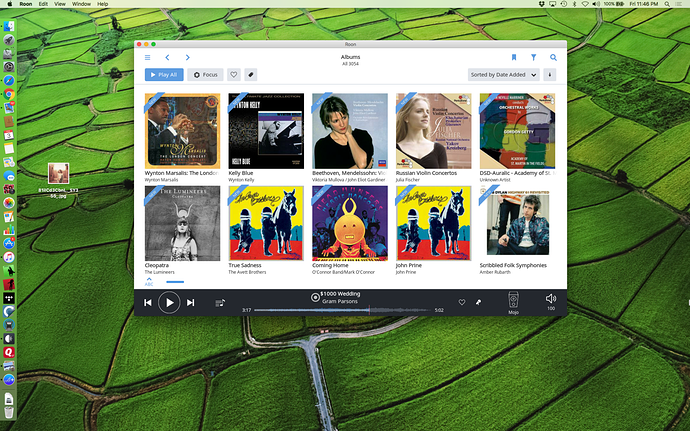 But when I click on each album (the screenshot below shows what happens when I click on the John Prine album), the correct cover art and songs show up on the main page. But the thumbnail for the album on the right still has the wrong cover. And I have tried to correct this multiple times and it doesn’t stick. 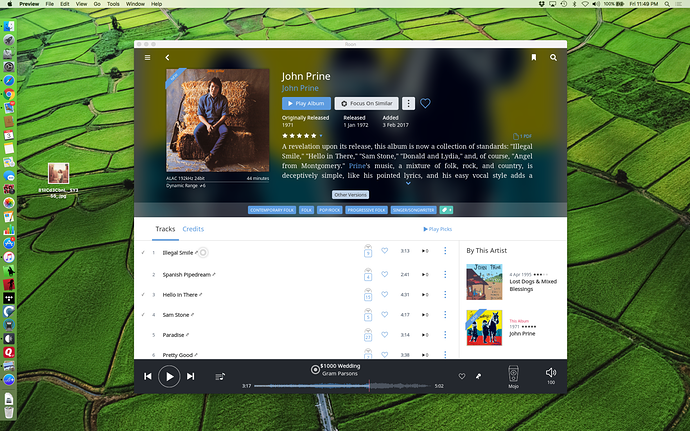 For the mixed up artwork, just go to settings/setup and clear the image cache.

All artwork is then re-read and all should be good. Do this on any client that you are using that had been used previously in 1.2.

Thank you Nick that did the trick. I am back in business!

Great. I had the same issue this week so was pretty sure it would do the trick.