Does anyone ever listen to music anymore? Jeez…

Not entirely sure what you’re meaning by that?

Does anyone ever listen to music anymore? Jeez…

Useful if you are a bat

Edit:
Of course, it is completely pointless… Some rare material with this might exist, but most likely upmixed already.

Can we get down-vote buttons for feature requests? These frequencies are downright ludicrous.

If the OP’s request is senseless, then so is DSD512 and 768k PCM, or any other res above CD quality, take your pick.

As I understand it, the thing about greater resolution is that it allows any applied filter to work more effectively.

BTW - I never apply any DSP, either in Roon or on my DACs. To me, it’s gilding the lily.

You don’t seem to understand. Many DACs do that kind of DSP internally anyway: upsample and modulate to drive a delta-sigma D2A converter. What @GoldenSound is suggesting is the ability to do that kind of processing externally. In general, DACs have limited processing power, so their upsamplers/modulators cannot be as sophisticated as what is possible with HQPlayer or other DSP software. Or you can try a Chord Mscaler, which is a lot more expensive and less flexible.

I think he means you’re an elitist.

@kim_hixson , I simply think people should stop listening to their gear (and imaginations), and enjoy music more. DSD1024 is absurd. Cheers.

I do understand, and I assure you, I read the request carefully. I still maintain that those frequencies don’t really make sense.

Now let’s talk about PCM. Whether D/A conversion happens at 64fs or 128fs or 256fs, DACs still have to further up-sample the input signal, since 1.5 MHz is still only 32fs, so you’re not bypassing the internal up-sampling completely. To do that, you’d have to pass 3 MHz PCM only to reach 64fs. Even then, you’d still not bypass the internal bit reducer. At those frequencies, you only need somewhere between 1 and 6 bits for D/A conversion - which is what delta-sigma modulators output. Sending 32 or 24 or even 16 bits PCM is a total overkill. For comparison, stereo 1536/24 PCM has a bit rate of almost 74 Mbits/s. You can easily send H.264 FullHD video at 60fps at that rate.

I’m getting really tired of all the know alls that persist telling everyone that “bits are bits” and all of the usual blurb, citing the church of ASR.

If @GoldenSound feels that it is reasonable for Roon to recognize higher rez files then it’s a perfectly valid feature request. You dont necessarily have to agree that it’s a value adding feature but then ffs simply don’t vote…

Yup - the ‘Church of ASR’. Love it - well said.
How that channel survives is beyond me. Hang on…just got to listen to my sine wave…
Unfortunately, Mikael, the Church of ASR is affiliated to the Flat Earth society - not much we can ever say.

Ok, so let this thread goes down the drain.

I would say, the people who believe they hear differences between DSD512 and DSD1024 are much more like flat earther, more believing than seeing. ASR is more like “Hey guys, believe it or not, but the earth is not flat, because science has proven so.”

It seems there is quite a lot of confusion surrounding upsampling and what the benefits of it are.
This will be a bit of a long post but hopefully it might be interesting to some.

Firstly: You’re already upsampling. Unless you have a NOS DAC your DAC is upsampling internally to typically 384khz or 768khz, and then the 2nd stage modulator will take it to ~22mhz (though this is a slightly different process). For two reasons. It is a requirement to adhere to nyquist theory. Nyquist does not state that 44.1khz sampled data IS the analog signal. It says that you can reconstruct it if you perfectly band limit at 22.05khz.
The problem is, perfect band limiting (ie: instant and infinite attenuation) would require infinite computing power, which we don’t have. As such, we have to make tradeoffs.
How the filter and window function are designed affects things such as frequency response/rolloff, performance of spectral leakage (frequency domain accuracy) vs transients/time-domain accuracy, phase linearity and other aspects.
With low tap count filters the tradeoffs are significant. And rather than choosing which tradeoffs to make you can reduce ALL of them by throwing more compute power at the problem.
Better transient response, lower spectral leakage, and also some other benefits I’ll show lower in the post.
The easiest way to show these effects is actually when doing measurements. In fact the windowing function and FFT length when measuring can be critical!

If we use a window such as a rectangular window, this focuses near entirely on time domain performance. This means that transients will be perfectly timed, but our frequency domain accuracy is very poor and so on an FFT (frequency domain view) we can gain almost no information at all due to the transient energy being spread across the entire spectrum: 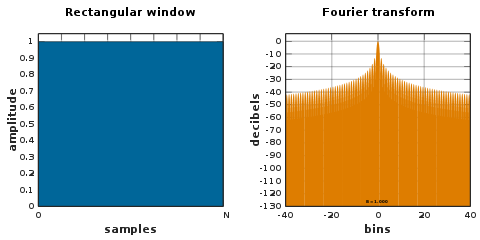 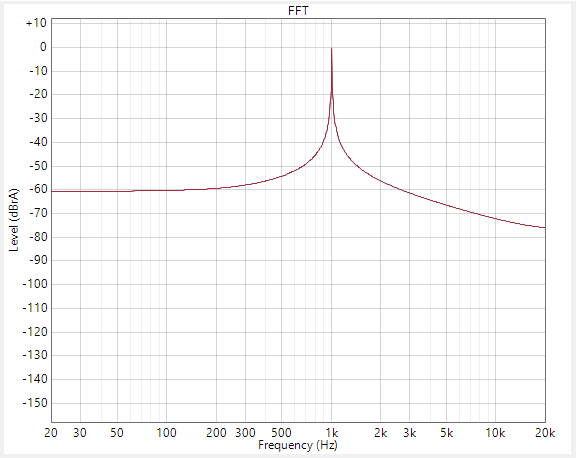 If we change to a Hann window things are a bit better but we still have quite a lot of spectral leakage: 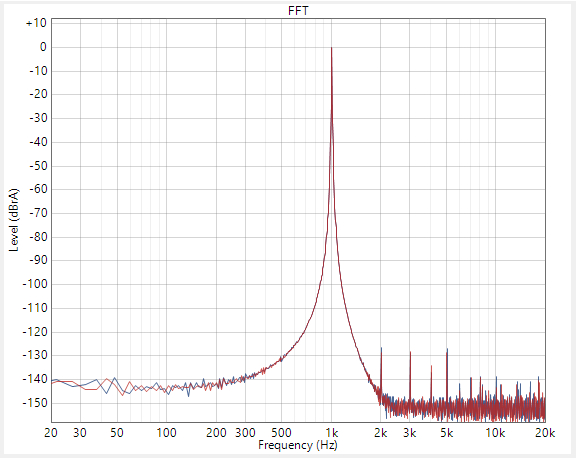 Or we can use a window with near perfect frequency domain performance, but this will make looking at transients near useless: 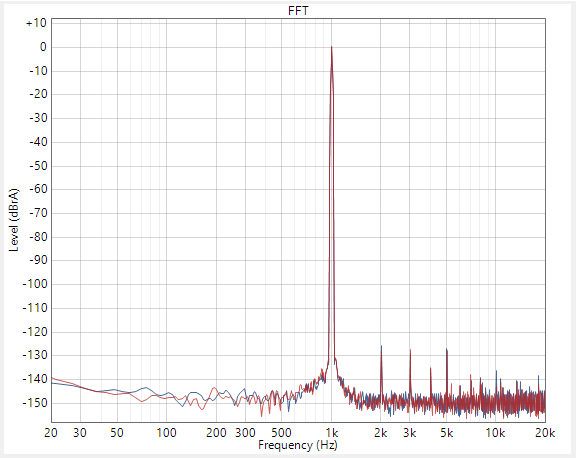 So why wouldn’t we always use the last one? Because as said earlier, it’s all about tradeoffs.
Even with the middle-of-the-road Hann window, when we look at how it impacts a transient signal we can see how much it messes with the timing of transients in exchange for the better frequency domain performance: 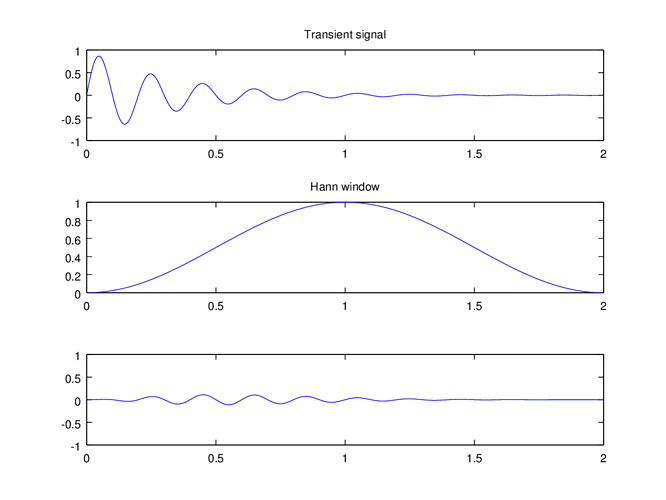 So the solution is instead to throw more compute power at the problem.
If we use a 1 million point FFT for example, which from a mathematical standpoint is similar to using a 1 million tap filter in a DAC, we can see that we now get great performance in all areas and all tradeoffs are reduced. We have great transient response and better frequency domain performance regardless of which approach we use.
Hann Window: 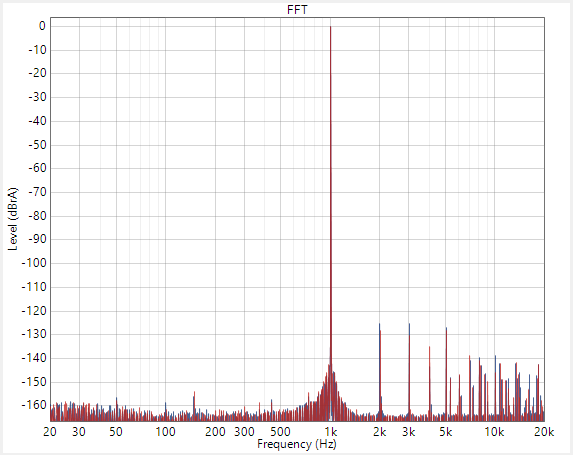 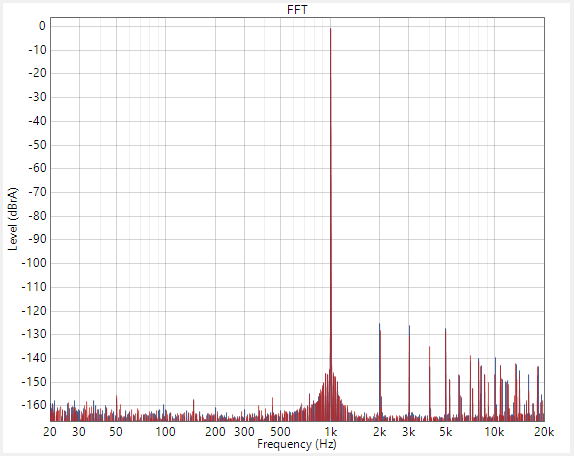 Both windows look nearly identical now because we aren’t trading off any areas of performance as much anymore and they’re more accurate across the board.

And the second reason your DAC will be upsampling is because delta sigma DACs REQUIRE oversampling to function properly. Delta sigma DACs often have only ~5 bit converters nowadays. And so without oversampling you’d be limited to 5 bit accuracy. They are able to be as accurate as they are by running much much faster. From a mathematical standpoint you can trade speed for accuracy, and this is exactly how both delta sigma DACs and DSD work.
DSD64 vs DSD256 for example isn’t about extending the frequencies you can represent, you actually get significantly higher dynamic range within the audible band with higher DSD rates. Not to mention the fact that with lower DSD rates like DSD64 you actually can’t time transients correctly due to the nature of how PDM works. And this effect can be lessened by increasing the pulse rate.

The point of external upsampling isn’t to do something new (cause as mentioned, you’re already upsampling!), the point is to do it with as high performance a tool as possible so that you minimise any negative impacts of the oversampling your DAC would otherwise be doing. DAC chips are limited in compute power and therefore the upsampling filters internally will have to be very basic. The 9038 pro chip for example has only 128 filter coefficients (taps).
Compare this to DACs like the chord DAVE which have a powerful FPGA and can run 164,000 filter coefficients, or software like HQPlayer/PGGB where you can run many millions of filter coefficients.

Secondly: Upsampling isn’t just about the actual upsampling itself. It’s also about noise shaping.
DACs will run noise shapers internally. Typically basic TDPF dithering for the initial PCM upsampling stage and then will have proprietary noise shapers for the actual modulation/delta-sigma part.
But again, if you have more compute power you can run more advanced noise shapers to get demonstrably better performance. Especially if you tailor the settings to the DAC itself. 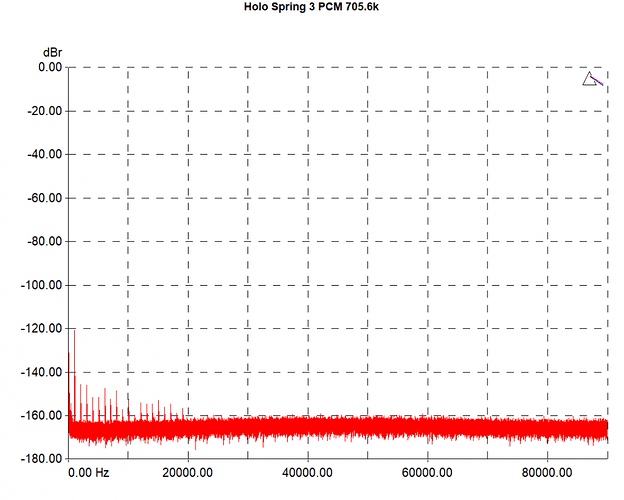 Now here’s the same but with the HQPlayer LNS15 15th order noise shaper configured to the linear range of the DAC: 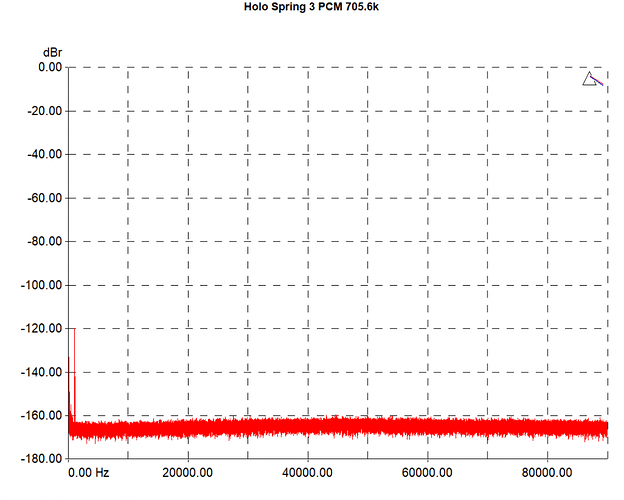 Performance for low level signals is demonstrably improved through use of HQPlayer.

Upsampling is nothing at all to do with somehow outputting things above 20khz.
HQP/PGGB and any other upsampling tool still filter out >22.05khz content. They just do a better job of it and you get demonstrably better performance in various areas.

And even ignoring all the above, for those who are saying 1.536mhz PCM / DSD1024 support shouldn’t be included simply cause they personally don’t think it’s useful, I suppose all the other hundreds of features in Roon that you personally don’t use should be removed too? I don’t use tags, so I guess roon should remove them for everyone cause people should ‘stop fussing with tags and just listen to music more’.

Roon is a tool that offers a fantastically comprehensive featureset for all who use it.
Hell roon even has it’s own built in upsampling!

Support for these file types shouldn’t be much of a challenge to implement I hope as it isn’t really a new feature that needs developing.

Regardless of the marketing hyperbole, if music or hardware is produced with a specific capability, Roon have an obligation to assess and see if it is worthwhile supporting the format. Quite often that comes down to what we ask for. In a conversation I had with the designer of a DAC I owned at the time he had a compelling technical argument for choosing and sticking to DSD 128. Ultimately though he updated to 256 capability (the DAC was FPGA based) because people looked at the numbers and chose rival products. Even some staunch anti MQA members of the manufacturing community have admitted that they have to consider supporting MQA if demand is sufficiently high. Roon may have to consider 1028, not because they believe or buy into its merits but because it is commercially prudent to do so.

Stupid question:
Why does Roon needs to support DSD1024 files when it can be upsampled by e.g. HQ Player. Does anybody wants to store the files in DSD1024? How big will be such a file? I guess “native” DSD 1024 file are quite rare and will be for the forseeable future.

But for either: For the same reason why it’d support any other file format. You can play DSD512, PCM768khz, Tidal, Qobuz etc in other software, so why does roon need to support them?

Because that’s the whole point of roon. To be a central one-stop-shop for your entire library regardless of format or location. It’s a butler for your music and makes the process of listening to music easier.
If it were adding an entirely new file format I’m sure that’d take some development work but this isn’t. It’s still just WAV/DSF which roon already supports.

To go with the argument above, if it is commercially relevant for Roon, than I am pretty sure they will support it, but if it will be even for Roon a niche feature, than why should they? Only because they can? Don’t think so.

So the vote is relevant, to see if there is a “market” for this or not.

Because that’s the whole point of roon. To be a central one-stop-shop for your entire library regardless of format or location.

Absolutely the essence of Roon in two sentences.