1.8 - Classical test drive and some frustrations

Yes. Going at it in the opposite direction works better. But as I responded to another poster I don’t actually use any of these approaches on a regular basis. Normally I start from the composition view. The weakness there is the manual effort required to identify your library at both a composition and album level. Roon auto-identification of compositions had issues in 1.7 and these are largely carried over into 1.8.

Thank—I’ve been using that feature and I do like it. I’m just wondering why my collection has been “split” in this way.

How does one edit an album’s Composer?

@Frank_Angelini
The root cause of many of these problens is poor quality metadata.
I have always found it strange that the labels don’t care enough to annotate their works, they seem to get a file, put on a vinyl or plastic disk, and send it out to harvest the money.
But so be it.
Roon does not edit the metadata, that’s not scalable.
They build software that tries to navigate the mess.
If you find reasonably common cases that don’t work, bring it to their attention.

I agree—sometimes the so-called metadata is laughable. How would I “add” a composer tag to compositions without one?

Are you trying to do this in roon or an external metadata editor like mp3tag or Yate? It should be straightforward but there is no guarantee that will help roon to identify the composition. It’s a start though.

I see some improvements possible with split-personalities like Bernstein. The missing “composers” filter criteria feels relatively simple to work out. We’ll take a look.

Artists like Bernstein are tricky to pick apart automatically. There are a lot of people that appear to meet the criteria of being both conductor/performer + composer as a result of one out-of-character recording or some inaccurate metadata, so there is a balance to be struck when defining data-driven rules. In any system like that false positives or negatives are possible.

This part of the automation was designed to fail in the less damaging direction–hiding some options on the page of people like Bernstein. If we turn the knob the other way, we’d risk snowing the Beethoven or Mozart pages with thousands of albums that have those composers erroneously tagged as a performing artist.

The design space for data problems like this one does not look much like the end product–we are tweaking knobs pretty far away from the interface to produce the best emergent behavior possible for as many people as possible.

Like I said, I think we can do better, and we’ll look at this case–just wanted to give a little bit of insight here.

Despite the stuff I outlined above, Roon overall keeps getting better and better for me. Great job to the team on 1.8.

It’s ok to experiment in roon this way and it may be you only want to make occasional edits. But if you find you want to invest any considerable effort in managing a library you will want to consider external third party tag editors. Mp3tag is popular for Windows and Yate for Mac.

Great. Another obvious one, especially for those with Qobuz accounts is Pierre Boulez. Also Benjamin Britten. I have a weakness for contemporary choral music so I see it also with Chorus Master / Composers like Rutter and McMillan.

Not sure how that gets generalised into a rule though. Maybe its similar to singer/songwriter rules?

Strange. I got the same result. To be fair you do get Beethoven album and track sections but here is no Beethoven composer section. My guess is that it is correct in some technically very counter-intuitive way. I’ve no idea, that’s for sure.

The “old” system with the switch on the artist/composer page worked better for me, since I could check the artist pages for composers and manually remove them from credits.
With 1.8. I seem to have lost that possibilty. A very interesting discovery I made was that George Szell obviously composed.

When I enter via the artist screen I do find him, but only learn about similar composers 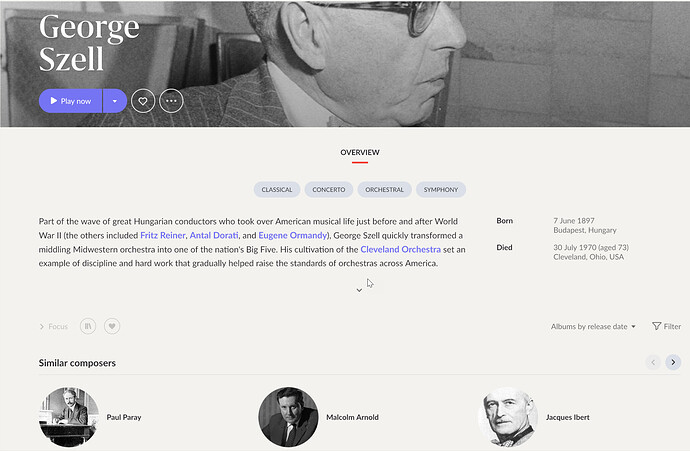 However I do not find him under composers. For Bernstein, I do find him under both sections. But with Szell it’s different. Maybe there has already been some work done i the background, but it certainly looks weird

I’m beginning to see a pattern here. Szell did compose a few things in his youth apparently: 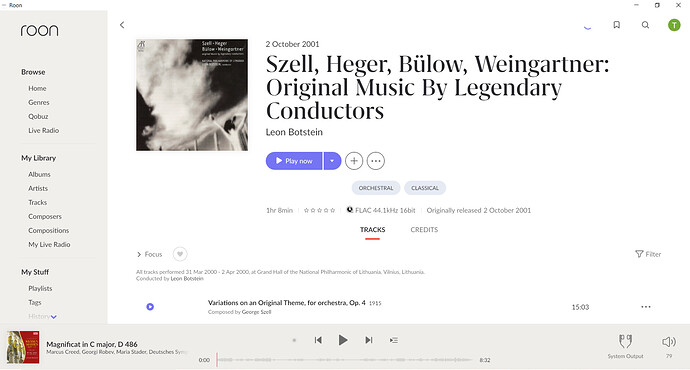 You only really see this if you have a streaming account. You would really have to be a completist to have something like this in a local library. There is just the one composer credit in the entire universe of the Qobuz catalogue as far as I can see. Doesn’t seem to justify such an unexpected presentation by roon.

I don’t know how this works. Bewildering really. For example, I know I have the Elgar, Complete Electrical recordings (everything he recorded for EMI) but I just couldn’t find it as he is categorised as a composer not a conductor. Eventually, the only way I could find it was to go on-line, find the exact album title " The Elgar Edition: The Complete Electrical Recordings of Sir Edward Elgar" which I couldn’t remember. Searching on that brings up the Qobuz album and from there under Versions I could eventually find my own copy. Grrr. Must be a better way.

I tend to agree. I found the 1.7 performer/composer buttons easier to navigate. I don’t think that is aversion to change. They weren’t perfect either but seemed to be better than this if you are looking for something specific and you know what to filter out. It looks like roon are trying to weed out all the noise of dead artist/composers which is compounded when you are dealing with streaming catalogues. I’d say 1.8 in this scenario works better for casual listeners just looking for something to play and not wanting to be snowed under by too much choice they cannot make sense of. But if you are trying to find something specific its all become quite a minefied now. I’m not sure there is actually a middle ground between these use cases.

This issue of performer/composer has been brought up a few days ago and the Roon team have indicated that they are working on it (see my post Performer/Composer segmentation in Roon 1.8) where ironically I used George Szell as an example: I guess I qualify as a completist and it is the most extreme case in my local library! An artist like Bernstein is a much more problematic example for most. Szell is only credited as a composer or arranger for few works, a practice he mostly abandoned after he arrived in the US and, like many conductors of the time, he “rearranged” some of the works he conducted for performance in a manner that was very limited and would therefore not be credited as an arranger (eg his famous renditions of the Schumann symphonies). This problem seems to be limited to the Classical field and not to affect modern music. Let’s hope that this can be corrected in one of the next updates as it otherwise nixes many of the new functionalities version 1.8 has brought to Classical listening (and yes there is still some way to go but kudos to the Roon team on the effort for what is unfortunately a marginal category today).

Yes. Hope there is a fix. Roon seems to be using artist role as a way of constraining the very large search sets you get from on-line streaming catalogues. Are there other context aware views behaving differently depending on artist role? This seems to be quite a change from 1.7. There were a lot of complaints about overlarge streaming search sets of thousands of releases. I guess this is the solution. Not really an issue with a local library.

Classical classification is a minefield topic but of course much easier to deal with in a local library particularly for those that want the “Artist” field to encompass composers such as Mozart, etc, which would make streaming links unmanageably large -I personally prefer Roon’s approach. It seems that in this case the issue is linked to the “is a classical composer” tag in the Artist edit. Switch to no and voila, your library would snow your recordings with Szell as conductor in your library albums. It a partial, time-consuming and sub-optimal fix and I trust the team will find a work-around (and why this is not an issue for Bowie or McCartney as performers and composers where it works fine).

If I may add another topic for classical that would be helpful for discovery IMO: 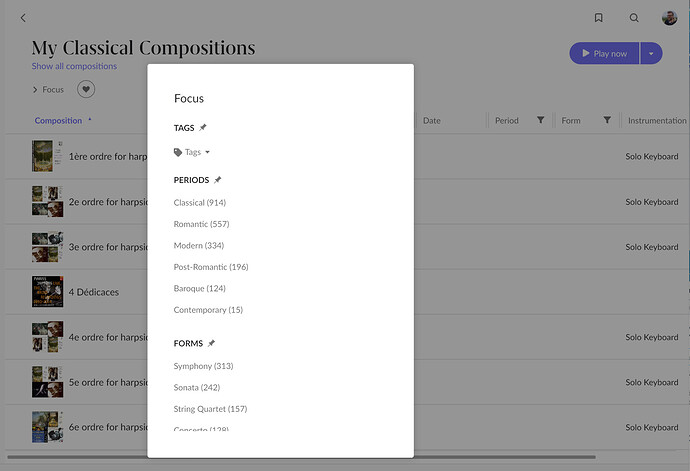 Focus still does not work on all fields in the composition (Instrumentation and Date is still missing). What would be terribly helpful for me and hopefully others would be a possibility to focus on a given time period and compare compositions composed at around the same time. This could be a cool discovery feature “Compositions from the same decade” or so.
This could be more enlightening to people than any stuff from Valence.

Apart from that: why is the Focus dialog on compositions vertical instead of horizontal?

while we’re at it

would it be possible with the new classical structure to solve the op.xx/yy problem? Just looking at Chopin, I think there needs to be a possibility for compositions to be grouped together as belonging to the same “group”.
If you look at the available metadata, there is an “by album” approach towards this. Are the Nocturnes op.27 a single composition or two? With TiVo/Rovi you’ll find both ways depending on the album. Both ways of looking at it has its merits, but if they are mixed and the connection is not established somewhere it is a big problem for exploring the library and discovery.
For my tags I have tossed a coin and decided on the most granular approach. I think this is one of the big classical metadata problems that need to be adressed. We certainly wonÄt solve it on the metadate front but a piece of software dedicated to classical should be able to solve it.

This has already been reported to support, it’s happening where a Performer is also credited as Arranger or Composer, I found it with Wilhelm Kempff as he is credited as arranging Bach transcriptions, al. My Kempff albums are missing

It is recognized as a bug …