1.8 - Classical test drive and some frustrations

Anxious to put Roon 1.8 through its paces as a classical listening and search engine, I went right to the big guns. Wanting to see how focus works across streaming services, I searched for Leonard Bernstein with the intention of trying to focus on Lenny’s Mahler. Oh dear.

Roon classifies Lenny as a composer, so there appears to be no way from the Artist/Discography page to focus on composer - and look for all of Lenny’s Mahler, for instance - because Roon already sees him as the composer. This is especially apparent when I focus on my local library, and only albums featuring a Lenny composition appears.

Well, ok - let me try Karajan (no comments from either the lovers or haters, please).

Herby is listed as an artist, so - so far so good.

On the overview screen, I see the box sets that are in my local library. Clicking through to the “album” (box set handling being a sore subject for another day), focus works as you might expect (and is of course dependent on how well Roon can identify/match the box set, or on how scrupulous your local tags might be). But what if I want to see all the Beethoven on the 4 large DG box sets (60s, 70s, 80s, and Opera) in my library? Clicking over to Discography, I select the Library focus icon, select the four boxes, then click focus. This is where things start to break down. First, I notice that selecting albums or box sets does nothing to the focus, which seems to be always be based on the number of albums that feature (!) that composer Selecting Beethoven as my focus criteria, it will now simply tell me that Beethoven appears somewhere on 12 of the 17 albums in my library that feature Herby. Clicking through to the album, one must initiate an entirely new focus operation to narrow it down to work/track.

If I instead include non-local (Qobuz and Tidal) content, there are now 605 albums which feature both Karajan and Beethoven. It should also be noted that the focus operation is really only telling you that an album features both Karajan and Beethoven. In some cases, compilations may contain Karajan conducting another composer’s work, while another conductor does Beethoven (this is admittedly rare). Again, the focus is (disappointingly) not maintained when you click through to the album. Interestingly, though there are over 2000 albums of varying types, the focus lists only 10 albums where HK is conductor…but, when you click on that focus criteria, there are still 1800+ albums listed.

Moving to another test case, I chose Daniel Barenboim, who is noted as both an instrumentalist and a conductor. From the overview screen, I click through to a multi disc set in my library, and the focus is nicely maintained to show only those works where Barenboim is involved. On the Discography page, I am able to select Barenboim as both performer and conductor, and I seem to get a reasonable (though not perfect) list of albums where he does both (either simultaneously or separately). Removing the initial focus and then selecting Brahms as composer, Roon does a reasonable job at condensing the list and rooting out generic compilations. However, since the focus feature is an ‘and’ function, you end up with some strange and meaningless artifacts. For example, after focusing on Brahms, you can further sort from a long list of conductors, who in turn happen to be on a compilation somewhere featuring both Barenboim and Brahms. Similarly, if you wanted to find collaborations with other classical artists, adding an additional focus from the list of performers can be frustratingly non-specific, as it will not always distinguish very well between actual collaborators and people who simply appeared on one of the thousands of generic classical compilations along with DB.

Throughout all of this, sorting by label is somewhat dodgy, as the major labels are represented by multiple name variations. There also appears to be some indeterminate crossover between labels that were historically separate but are now joined (e.g., Warner and EMI). Selecting one or the other will sometimes give you some, but not all, of both.

All that said, this whole scheme is still miles ahead of where it was, as one can use a combination of focus and filtering in most cases to usefully browse the repertoire. It’s just not, perhaps, all it was cracked up to be.

In part two of my test drive, I’ll tell you about my (mis)adventures trying to use Roon to explore renaissance polyphony…

Right enough, Roon returns Leonard Bernstein Composer as top result for a search, but when you go to his composer page there is a Discography option which, since I have Qobuz, has 597 albums. Alas, there is no Composer in Focus for this, but you can filter to get get Mahler say. 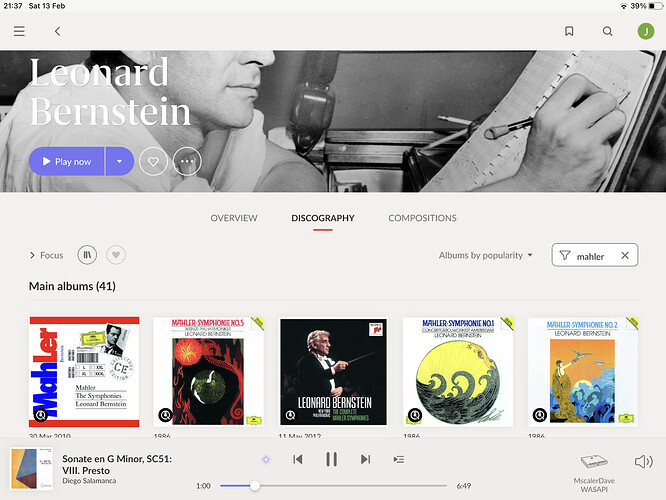 Yes. I get a similar result so I tried to take it to the next step.

I know I have quite a few Bernstein/Mahler in my local library. But how do I get to it? I scrolled around a bit in more or less that same screen shot as yours above. There is certainly plenty of Qobuz Bernstein/Mahler but where are my albums? I started to recognise a few Qobuz covers and just clicked. That’s when the penny dropped. The only way to get to local Composer/Conductor content is by clicking on a Qobuz album and going to “Versions”.

This cannot possibly have been designed this way? This is how you are supposed to find local library content for composer/conductors now? Surely no one thought this made any sense in beta.

I searched for Leonard Bernstein with the intention of trying to focus on Lenny’s Mahler.

I know I have quite a few Bernstein/Mahler in my local library. But how do I get to it?

In the image right above your original post, there is a local library button next to the >Focus right above the albums. This weeds out everything that isn’t in your library. I think it is pretty cool!

Try the “Library” button next to focus.

I wish it was as easy as that. Roon often went wrong in 1.7 once you stepped outside simpler use cases. Hour by hour I am finding that 1.8 struggles much more.

This is a special case where an artist is equally as famous as a composer and a conductor. But Bernstein’s case is not particularly uncommon especially if you like contemporary classical by living composers.

What happens when you click on the library symbol is you get all your local albums where Bernstein is a composer. In my case that is 94 albums. Then when I do a filter with “Mahler” all I am going to get is local albums where both Mahler and Bernstein are composers. I have just one, which is a Leider album from Anne Sofie von Otter.

Maybe there is an easier way. I hope there is but its not intuitive if there is. Not for me anyway.

I see. I typed in “Mahler” into my search, went to Discography, Focus, and chose Bernstein out of the list of composers. I was able to click the library button and it gave me my locally stored options. It worked pretty well for me to get to my Mahler Bernstein.

I don’t use Filter very much if at all. I usually search. A couple of keywords in the search box works great - in your example I would type “Bernstein Mahler”, and then click the library icon if I want to limit the search results to my library versus what’s out there in Tidal/Qobuz.

Or, more in line with my tastes, “Kuijken Bach”. Usually what I’m looking for is right there within the first row or two of results.

I use filter for more technical/detailed situations like wanting to find an album with a specific sample rate or channel layout, or “small covers” if I’m on a binge to improve image resolution across my library.

There are certainly workarounds to do much if not all of what you want. I wanted to simply explore and listen to some of Leonard Bernstein’s discography (Mahler was just an example) – and, on that point, the weird distinction of composer vs. artist exposed a weakness of using Roon as a classical music discovery device. This is with one of the most popular and highly regarded figures in classical music of all time. My only point, I guess, is that Roon is still somewhat clunky as a classical discovery vehicle.

I am very happy with the upgrade. I use on my Linn Klimax player through IPAD and Roon Nucleus .
So far everything is perfect. Very intuitive interface.Especially the classical search engine. Much much better.Can now search for example Bruckner’s 8th symphony and it gives me every recording available first on my library and then all recordings listed in Qobuz. This is what I was hoping for with the upgrade. There improvements are too numerous to mention. So far , there is nothing I don’t like about 1.8.Well done!

Someone on another forum was saying the classical search is terrible. He typed Symphony in the search box, then filtered Beethoven but Beethoven was not listed as a composer. I tried it myself, and repeated his results. However, if you start with typing Beethoven, then it’s easy to filter for compositions by symphony. Not sure why Beethoven didn’t appear as a filter after symphony though.

or go to the composer, click compositions , then on the work

That only shows Symphonies in your Library.

here’s an example:Go to the left dropdown and click on composers, classical only, Click on Holst,It shows your library in the overview, then click on compositions,It takes a while, then it brings up his compositions filtered by popularity , alphabetically etc.Click on the Planets, then you get all of the recordings of the planets. Mine are from Qobuz, but I’m sure it works the same way with Tidal

there is sometimes a connectivity problem when you click on compositions. The engines loses connection and won’t display anything. Worked great for a while, now it’s not showing anything. Seems like a bug to me

I think they are having some server issues with all those downloads of 1.8 happening…

Having had a bit of a play with the new Classical search on Roon 1.8, I still can’t seem to do what I’ve wanted to for a long time, that is, use Roon Radio to play only Renaissance music.

I went into My Composers and selected Renaissance for the Period list. There was an option to Play Now. Pressing this gave a message saying ‘Tracks played are unavailable’. Which doesn’t make a lot of sense to me because I haven’t played any tracks yet.

To confuse things further, if I select Classical from the Genre heading in My Composers and then press Play Now, it starts playing a list of 55 tracks totalling nearly 4:30 hours.

Anyone have any idea what is going on? Is there a glitch here or is it just impossible to play just my Renaissance composers work?