1.8 I do not see my ripped CD's anymore if I have multiple versions

Hi
I am keeping my other concerns for 1.8 for another post (yes they are so bad, that I consider to go the Aurender route after being a 2 time lifetime member since 2015).

My main problem is, that I do not see my ripped CD’s anymore in case I have multiple versions.
Under Discography of the artist (apparently the only place left to see albums from a certain artist), I can see Tidal versions, but if I have both Tidal and a ripped ALAC version, the ripped version is not visible.

Is this a bug or a feature? Or do you get paid by Tidal to play their version and hide the private versions?

Just make the Primary versions if you like, it’s quick and easy, although it seems my local version is primary in this example. I haven’t changed it. 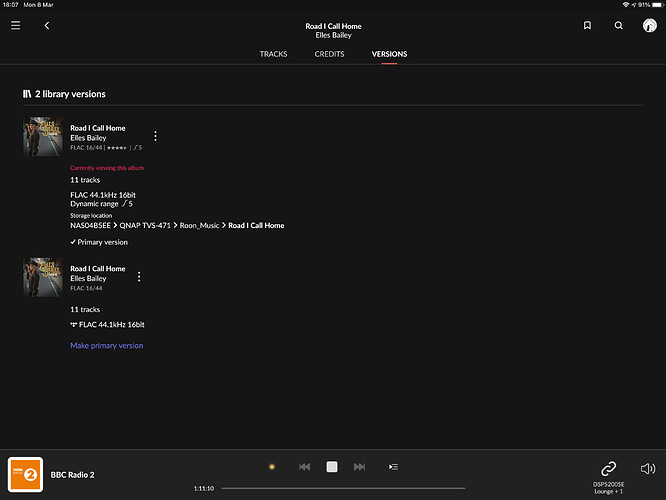 First it is marked as primary version. Secondly under the album that is shown under the artist discography, it is not shown as a version

A “discography” is the recordings catalogue of an individual artist, group, or orchestra. It is not, and never was intended to be, a list of all the versions that you might have in your library

You’d probably better off using the Album Browser and Focus. You can Focus on Performers and Duplicates to show all the versions of your selected Artist.

Exactly what Geoff says it’s only showing you the Tidal version as that’s where it pulls the info it won’t play that version if you have the album locally and it’s your primary version of that specific album. it will play that version not the Tidal one. The only time it won’t if it’s not identified as the same album and not grouped with it. That’s how it works for me. To see other versions you need to click into it and they will show up like they would for any other view. You can also use album view and focus or filter for the artist to see them with your primary at the top. Discography is not the only way to see all albums by an artist in your library .

I could live with it, if it would show the same album as a different version. But as the DSD album has a different song on it, the tracks do not correspond.

I always guessed that that was the reason that both versions of the album where shown next to each other (in 1.7). Now in 1.8, the DSD version is not shown at all (even while it is marked as primary version).

This focus option is so slow, too many clicks required. I am a bit lazy, I want to navigate efficiently between artists.

I really do not see why not all the albums of a given artist in my library should show up under discography of that artist.

Either as single album, or as version. I would classify this as bug.

The discography should not show multiple versions of a release. For a popular album there could be literally dozens of releases from different countries with slightly different track orders or a version with an additional track here or there. Showing all these along with whatever versions of the release you have in your library would make discography a mess and unusable. Discography does indicate that if you have it in your library and if you do it reports the format of what you’ve set as your primary version. All this is perfectly correct from my perspective

If you are in overview, 1.8 works exactly like 1.7. If you’ve grouped multiple versions of a release it will show you only one album cover and report the format of the primary, and you can see the rest of the versions of the release by selecting the album and clicking versions.

If you want to see all the versions separate from each other in overview make sure they are not grouped as alternate versions. Then you’ll see them all.

I wouldn’t change anything here.

It certainly does not work the same like in 1.7. In 1.7 I saw all my versions in the discography.

There was no discography in 1.7. You saw a display in 1.7 like overview – where the main section – “Albums in my Library” shows only your albums. And like I said in my post, you can have that section display all your albums. Just depends on whether they were grouped as alternative versions or not.

To make this clear, here’s a simple example.

First pic is the overview page for Ragazze Quartet showing all the album versions I have in my library for the same release separated. 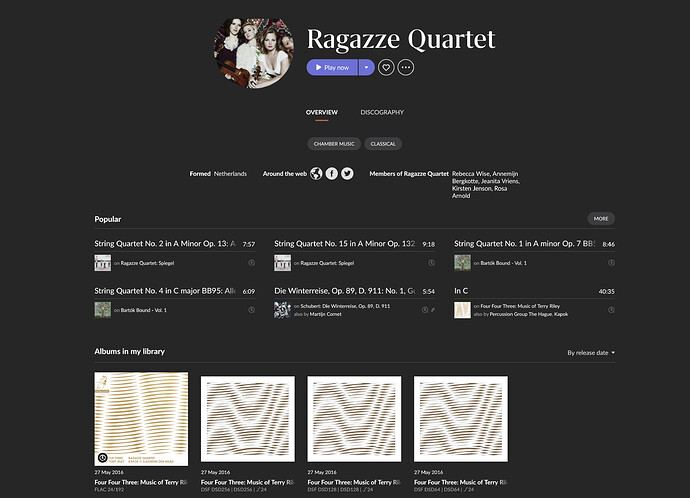 After grouping them as alternate versions, they now show as one album with the versions only showing on the album page by selecting versions. 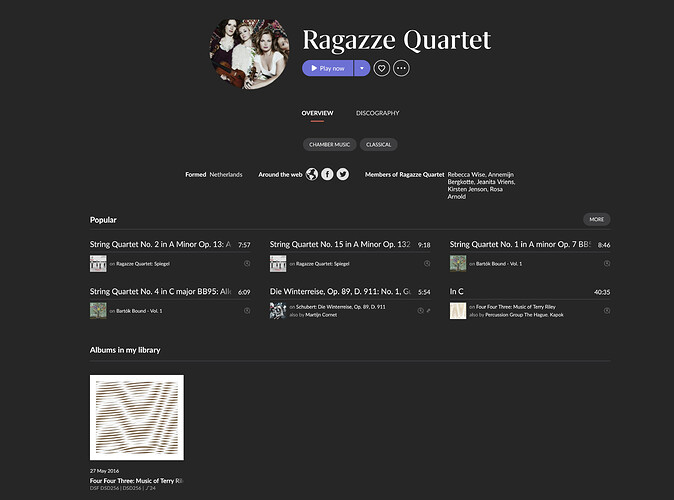 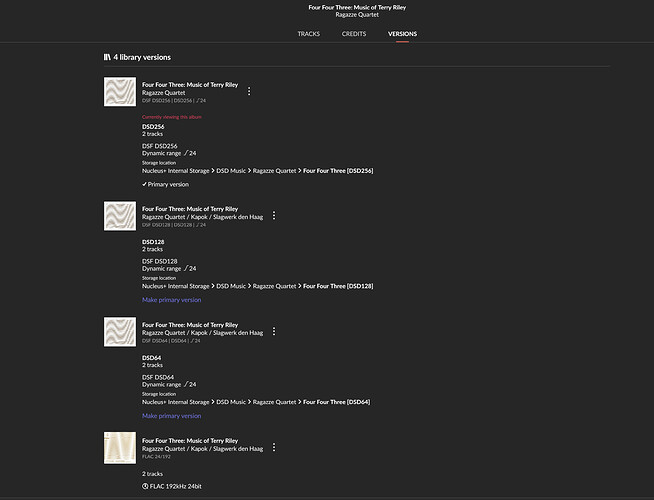 How this looks is totally up to you.

You are very mistaken as Discograpy didn’t exist until 1.8.Discograpy is a view that shows all albums
that Roon believes are available for that artist that in the streaming service you have if subscribed or if not what’s in your library. It’s not all releases of a specific album it’s.just one release of each album version not sure the logic for which one it does show here though. It will show all albums for an artist you don’t have in your library at all as well t’s for discovery purposes not navigation of your own material.

Just because it has a Qobuz icon does not necessarily mean it is the Qobuz version it’s just announcing it’s there as well. If its the same release as one in your library then it will be the primary version of this album and i will play that version and it will be displayed when you click through. Here you can select other versions of that specific release if you wish as Roon always has done. If you only want to see albums in the Discograpy that you have added to your library click the library icon next to focus. This wont remove the Qobuz icon as I have explained above it’s just an indicator. You can use focus to show just local music if you really want to.

If you just want to see all release versions of a given album in your library use overview it will list all the library albums in there. . If you have grouped alternative versions then you will have one version showing if not then all versions not grouped will show.

Here is discograpy showing one which is not the version I have ripped, Roons only showing the higher res version from Qobuz. Maybe because it’s higher res or because it’s the most popular only support can say on this.

If I want to have my album play from Discograpy I would have to group it with the other version and select my version to be the primary one.

I think this is the same issues your having. You have very different releases of the same album. Use overview or album view and you will see your versions.

I can see why this can get confusing and the fact we don’t have control over what version of an album Roon decides to use to represent that album in Discography is an odd one.

i found some help on this support page:

so, make sure you go into settings and “show hidden albums and tracks”

the other has to do with “grouping alternate versions”

Both are discussed on that page.

But you’re right. it’s different than it was in 1.7