I am in the Roon Trial. I imported 11,000+ albums through a watched folder a few days ago. Over a day or so it Added Music to Library. The next day I added 50 or so albums that had not been in the watched folder to the watched folder. After an hour or two, it started adding those. When it did, however, I noticed it had subtracted the album count to 10,000 or so, but then it quickly went back to the expected 11,000+.

I have a dedicated mac mini running roon server, hard wired into a large NAS. The NAS music folder is mounted on the mac.

What is the issue here? Does it have to do with adding music to the watched folder?

I’ve tested the mac and it sees the music folder on the NAS without issue. Everything is hard wired. Other music servers on the same setup have no issues connecting, losing music etc.

Thank you for your kind assistance with this.

I have experienced the same, after the trial period. I am also on a Mac Mini, wired ethernet to a QNAP NAS where my albums are. It happened after I intentionally deleted 1 album from Roon. It was counting down rapidly so I quit the Roon app.
I thought it was deleting everything from my NAS.

After restarting Roon I had some tense minutes to see the counter moving up again from where I quit the app.
Music and Roon library data were all still there. It was a scary moment and I have never seen this again.

Thank you for the quick reply. Interesting, I as well deleted an album. Roon doesn’t touch the music files, so I think we don’t have to worry about that. It certainly shouldn’t have delete privileges on that directory (right, Roon?). But clearly this is a significant bug if it’s repeatable. It will take a whole day or more to add back my music into Roon.

And: I also turned off Roon a couple of times, but it did not stop the march to ~30 albums: which I believe probably represented one page of albums on my Roon screen, which may or may not be a clue to the bug.

Roon Support: Is this a known issue? If so, what is the issue exactly, how can we avoid it, and is there a fix in the works?

Thank you again for your kind assistance.

I don’t believe my eyes! After reading your reply, it happened again. I deleted Cosmo’s Factory from CCR and it started deleting again. Here are the important lines in the log:
Right after deleting the last track from CCR:

Then this happens and the counter goed down real fast; I see the albums disappearing from my album overview.

Etc. etc. My files are still there.

I appreciate some help. Where can I send the logfile to?

I have seen threads like this, a search threw up this which may be helpful.

Generally, this has to do with Roon getting confusing messages from your operating system about what’s happening on your NAS. @brian detailed some of the underlying causes (and our ongoing efforts to work around this behavior behavior) here, so that’s definitely worth a read.

This does not mean music is being deleted, but we know it’s an extremely annoying bug, and we are hoping to deploy the improvements Brian described soon. For now, some more details about your setup may help @support get things more stable for you.

I had not found Brian Luczkiewicz’s post referenced above, so thank you for directing that my way. Clearly this is an issue you must be looking into as I am experiencing all of the defects described there: very slow Roon load times, very slow Roon search times, audio drop outs (although I was able to make these less frequent by turning off all audio analysis), disappearing tracks, etc. Given the speed of search engines these days, the slowness in search clearly speaks to architectural issues that should be resolved as soon as possible (iTunes had similar search speed issues years ago they had to re-architect to resolve). I can understand how joining all that metadata into one search query - especially as you probably can not flatten it all at insertion so that you can always include the most recent library updates - could be very slow and taxing on cpu. Perhaps you might want to implement a simple search that just brings up the artist’s albums, or something like that that makes sense using your domain expertise. This could be turned on for collections > x tracks, or be a settings toggle. Then the user could click more info. I understand that metadata has become one of your prime marketing drivers, but this would then only pull metadata for that one artist after the user already has a track list and ability to play. Rather be listening to music than waiting to find it.

Because of all this, I’m not sure that Roon is the right product for me personally, or others with large libraries, at this point in your product development path. Which is a shame.

A workaround question for now: Is it possible to get do a one time import from a main folder into Roon instead of making it a watched folder? Then use a much smaller folder for watched files? Would that solve this issue for now if the Roon server was not looking for changes in the main folder?

We have thousands of users running Roon with extremely large libraries and with NAS devices, and in most cases things are quite stable and snappy. The 99% percentile libraries discussed in that thread are on the order of 50,000 albums, so we’re talking 500k tracks or more.

We absolutely plan to improve this behavior, but in the mean time we’d be happy to look into your setup to get some more clarity about what’s triggering these issues for you, and see if we can improve the situation.

But we need the details of your setup to do that:

Thank you for your help. Here you go. Let me know what else you might need.

Basic star topology.
The mac mini is cabled into the NETGEAR ProSAFE
The synology is likewise cabled into the NETGEAR ProSAFE
They sit a few feet apart.
The Benchmark DAC is wired directly to the mac, which is wired to the amplification, as neither of these need the network.
Roon core server sits on the Mini.
Roon app sits on another mac and ipad that connects wirelessly over a UniFi wireless network.
The connection of core server to app is made wirelessly through the network.
All UniFi endpoints are usb wired from the central controller.
There are no repeaters or extenders in the audio part of this system as they are not needed for audio here.
There is powerline conditioning, separate circuits, power outlets etc.

I have experienced the situation with the “subtraction”, too.
And I’m not a Mac user…
I stopped the Roonserver immediately, restarted it and the files were re-added into Roon.

The situation probably happened, when the NAS was under heavy load (re-scanning the audio files)

The disappearing of tracks issue occurred when accessing the core from a Roon endpoint on my iMac, wired ethernet.

That is interesting. My core was also busy with scanning a newly added album in DSD64 for volume, etc when the track countdown issue happened.

Can you tell us what version of OSX you’re running? Thanks!

Hi. I have not uploaded many albums in the last year. I have added files recently to roon and the same old problem happens over and over: the albums are subtracted one by one and it makes roon useless for the day or two. The album count that comes back is also variable, so that I never know if our albums are all there. This issue has clearly never been resolved. What is the status of this issue and are there any remedies? I am on 10.13.4 OS, but this has happened in all OS releases going back for the year or more. My gut tells me this is sparked by albums roon does not recognize, but that’s a gut response. I certainly hope you have more analytic data to respond. Thank you.

In regard to your most recent post. We have made some changes in this area of the application to improve upon our handling of changes that occur on network based storage devices and as such have not been seeing many reports of this lately. We can certainly try and do some additional testing to see what we can come up with, because as far as we know, this “trickling up/down” behavior with album counts should not be occurring.

In order to continue forward here, may I kindly ask you to please verify that your setup is still the same as above (#1 / #2) and furthermore I know you had listed how the NAS is being mounted in Roon in one of your responses above, but what would be great is if you could please provide a screenshot of your storage tab.

Additionally, can you please share another screenshot highlighting the SMB settings being used on the Synology 2414.

Thank you for the kind reply. Everything is well here, and I hope there.

Yes, the setup is the same aside from the Roon version, which is updated to the latest version.

I have attached a screenshot of the storage overview from Synology: Is that what you mean by storage tab? If not, please let me know and I’ll provide.

I have also attached two screenshots of the Synology SMB settings. 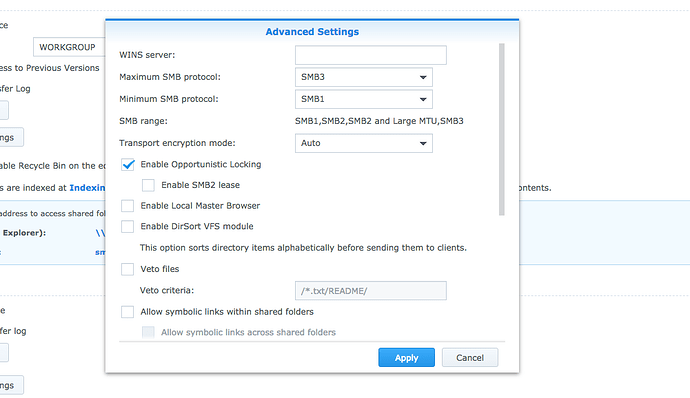 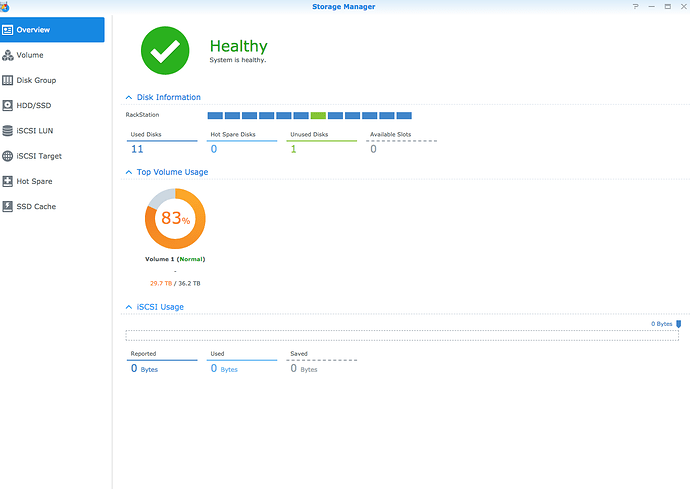 Hi Eric. This is depressingly happening virtually every time I add albums. Hope you see something that might help.