No matter what I try I can’t get 192khz working on my KEF ls50 wireless. I’ve tried ethernet, WiFi and usb with no luck. Firmware is the latest according the the KEF firmware app. 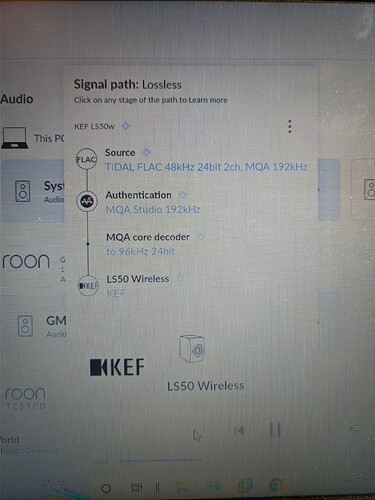 Welcome to the Roon community, @Mark_Reed2.

The source file is TIDAL 48 kHz MQA 192 kHz. Roon has decoded this to 96 kHz 24 bit. The second step requires an MQA renderer, which would result in 192 kHz. However, the Wireless I does not support MQA… this was introduced with the Wireless II.

Therefore, the signal path is correct. 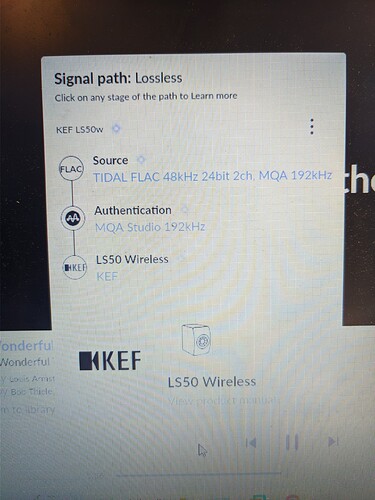 If I turn off the mqa core decoder I get the above. However I thought with the original kef ls50 you have to have core encoder enabled as the kefs don’t do mqa natively?

Ok so basically the mk1 can’t play 192khz mqa because it doesn’t support it?

That’s merely authenticating that it is 192, not playing 192. Since you don’t have an MQA DAC and turned off MQA decoding in Roon, nothing is decoding from 48. Turn Roon MQA decoding back on and all your MQA files will decode to 88.2 or 96.

The original Wireless has no MQA capability, i.e., neither decoder nor renderer, so Roon does the first unfold or decode stage.

As @Jim_F points out, the Authentication stage confirms that MQA signalling is passed to the DAC.

Ok cool. So I’ve just tried Qobuz and found a 192khz file and it constantly cuts out.
Now that’s not right I’m assuming?

Before I tried anything on Qobuz or Tidal I would try a local file. Do you have any 192 content in your library? There has to be some free tracks you can download somewhere to test with.

Qobuz 192 files are quite large. If they are cutting out, there is a network issue. Reboot your router and see if that helps.

I’ve tried ethernet, WiFi and usb with no luck.

Are all three different connection types cutting out for the Qobuz 192kHz playback test?

Hi John, just tried it through usb and it plays fine, so I’ve then checked the WiFi on the laptop and it was on 2.4ghz switched it to 5ghz and it’s playing better but still cuts out on occasion. So it looks like WiFi is the issue from the core (the speaker are wired to the router with ethernet). So guessing an ethernet connection from the router to the laptop of the solution
Thanks for your help

I have those same speakers. You will always get better performance via a wired connection than you will via WiFi. Yes, I know that are called a “wireless” speaker but in my experience WiFi never works as well as a wired connection.

I tried them totally wireless when I got them yesterday to see if they were as bad as the reports. They were worse lol, even being very close to the router.

The worst mistake KEF made was to call them LS50 Wireless. So many people complained that they worked poorly when on Wifi. Now someone will chime in and say “I have them working on Wifi and they work flawlessly”. Sorry to that person.

From memory, I think those Kefs only support 802.11n, not the newer ac or ax standards.

Yes it is a bit moronic to call a speaker wireless and that be the only feature that doesn’t work very well.

Helped me get a bargian though, with the newer versions out.

Paid £850 with custom design fs104 stands included. Boxed in mint condition, main boards recently replaced out of warranty and also have the original purchase invoice and KEF service invoice plus copies of the emails with KEF when they failed. I live near the service center in maidstone too which helps.