2 tracks are given same number

In Till Felner’s “Das Wohltemperierte Klavier,” each pair of tracks is given the same number: 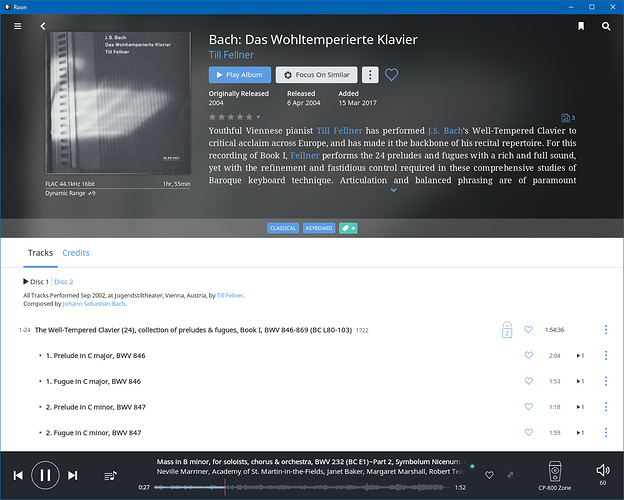 Hi @James_Antognini. This comes to us from Rovi/TiVo and is also used by allmusic.

I kind of see what they have done, but it’s a bit weird. I think that removing the numbers might be the best course of action (by them).

Just curious: Where are the numbers? I just re-ripped the first disc (with dbPoweramp), and I don’t see numbers in tags, other than the track and disc tags.

They are multi-part composition part strings which are provided by the Roon metadata service (and ultimately by our metadata providers). The numbers in this instance probably shouldn’t be there and I’ll raise it with TiVo.

Those numbers do not refer to track numbers, but to movements (parts) of the WTC. The 24 preludes & fugues that compose WTC ( book I and book 2) are very commonly grouped by prelude-fugue pairs, for a total of 12 such pairs in each book. Pairs are very naturally numbered from 1 to 12. The numbers referred to in the post are thus those of the 12 prelude-fugue pairs of the WTC. This way of presenting the WTC is not specific to the Fellners’s album. It can also be seen on similar albums, eg the Hewitt performances on Hyperion.

I agree that the way the WTC prelude-fugue pair numbers are identified by Rovi can be confusing and would need some improvement. But it must be noted that the WTC can be somewhat hard to identify in terms of composition/movements. Some prefer to see it as one big composition encompassing the 24 preludes-fuges, while some prefer to handle it as a suite of 12 compositions. In fact, both ways should be simultaneously accomodated, but I do not see how this can be possible given the current Roon data model. The really annoying thing is that, for some albums like those of Fellner and Hewitt, Roon does it one way (one big composition), and does it the other way (12 compositions) for others (recordings of Gustav Leonhardt on DHM for ex.). Albums containing the complete WTC I and II should really be handled in a uniform way in Roon (ignoring here which way is the best one), but unfortunately this not the case.

@joel Is Roon totally dependent on Rovi for those improvements, or could Roon proceed on its own to update the database entries ? How can we as users help to make those changes happen ? Will we ever be able to effect those changes at a local level ?

We are discussing this problem within the Roon team.