I found the following information in a 2019 thread:

This would seem to answer my question. But to confirm before blundering forward with what I’m planning, it seemed prudent to ask & be certain!

Currently, my Roon core is installed on a DIY HTPC which contains >16tbs of music. I was wondering if I could install a 2nd. core on our QNAP NAS? Based on the above, it appears that I can.

My intent is to use the NAS’s 2nd Roon core for multi-room music streaming. This would be for elevatior/background music, when the 1st. HTPC core is shut-down (because the 2-channel audio room isn’t being used). Also, the NAS would contain a fraction of the music on the main core.

With that said, while I have Alexa speakers, it appears that there is no easy way to stream a Roon core’s files to them. Unless that is not true? Thus, I was thinking of obtaining Google Nest mini’s for that purpose.

Does Roon “play nice” with Google mini’s in a multi-room configuration? Using an Android phone as a remote, it would seem like Roon would just “find” the mini’s when they are on-line and I would be good to go.

How’s my plan? Might I be missing some logic, or a step or two?

You can have as many Roon cores as you want with only one license, but can only activate one at a time. However, you should be able to play music to multi-room locations from your current Roon core. You don’t really need a second core unless there is some reason you want to shut down your existing core.

You can control the Roon core from anywhere is your house that has WIFI access to your router using phone, tablet, or computer.

Can confirm Roon plays nice with Google Minis in multi room.
However the larger Nest Audio speakers sound a whole lot better.
I was surprised how good they are.

My intent is to use the NAS’s 2nd Roon core for multi-room music streaming. This would be for elevatior/background music, when the 1st. HTPC core is shut-down (because the 2-channel audio room isn’t being used). Also, the NAS would contain a fraction of the music on the main core.

Do you intend buying a second licence? Otherwise, you’ll need to constantly authorize / deauthorize every time you switch cores. For your scenario, that doesn’t seem practical. Two licences will enable you to run them simultaneously on the same network with their library and database.

Roon does not work with Alexa devices, but will work with Google Minis (Chromecast). There are some limitations grouping non-RAAT audio zones. IIRC, you need to group these in the Google Home app first, but hopefully a Chromecast user can confirm this.

I would not pay for two Roon licenses just to use a second core in the same house when the first core is not running. I don’t see why the OP even needs a second core, much less a second license. 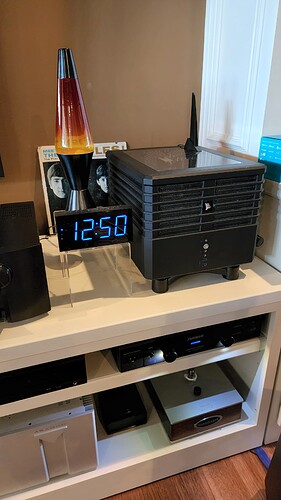 Having 8 Alexa speakers, I generally use Prime’s non-HD music, but am limited by those offerings. But now and again it would be great to have access to some control and the use of my own tracks and playlists.

Not knowing, I would assume that authorization/de-authorization is a fairly simple process of a couple button clicks. Whether that is the case, or it is finicky and not always repeatable the first time, I would appreciate advice regarding the process. I’m disabled and futzing with what were once minor details, like plugging in interconnects or an A/C cord, is no longer the case.

has several fans and hard drives

Your noise floor must be incredibly loud.

But getting back on topic… I can understand why you want 2 cores. Personally, I’d buy a second license or I’d move that loud box somewhere it can stay on all the time.

Swapping or de-auth’ing a core is easy. You’ll point a remote at a Core without license. It will tell you that Core has no license and reference the Core holding license. You click on deauthorize. You may need to login to do this. Then the remote works as normal on the new Core.

I don’t really have much experience with multiple cores so hope others will chime in with experience. Realize, your “background” core will be offline when your main rig is running. Multiple people in the house might notice this. Another reason just to use 1 core for everything. If I had to explain to others in my house the 1 license multiple core thing I’d be single.

I switch active cores back and forth between Nucleus and Dell. It’s a non-issue.

Thanks on the core switching advice! It’s good to know authorizing/de-authorizing was as I expected, no problem. One of the things among many, I found attractive about Roon, was that the interface once established, is rock-solid and just works!

Only wife and me in the house. So, no problem with the “background” cores. But thanks for the advice. It would definitely be important for some.

Never quite understood the gnashing of teeth over a background noise quandary. Most non-“silent” PC’s are fairly quiet and unless one is nearby, music and video generally overshadow what little, if any noise there is. For example, when there is no sound in my home theater room, the projector can be heard. But have some minimal sound and it can’t be heard. Of course, if one is mic’ing an Audyssey or Dirac pre-pro, the noise floor is very important. But yes, my HTPC is fairly loud. I threw more fans in it than maybe necessary, because of other’s having heat issues with the Corsair case and multiple HD’s. But a bat couldn’t hear the HTPC from the audio room in the basement with HTPC upstairs.

Sorry, the picture made it look like that beast was in your listening room

My Core runs on a 1U server with a blower. It’s in a closet on the other side of the house. I like a very quiet listening space.