A few minor issues regarding the audio selector 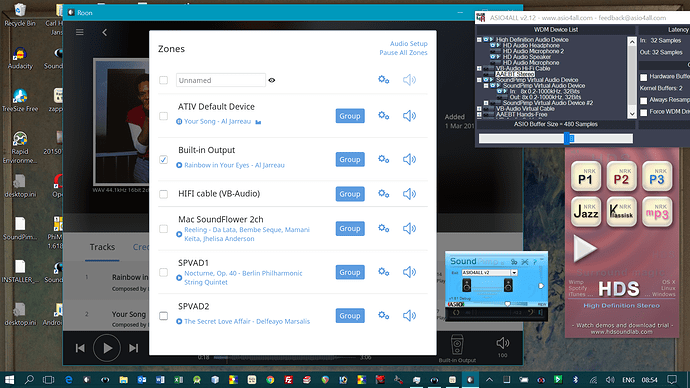 The audio selector system is looking very good, with zones and all that. Looking forward to use it in more advanced settings. I just report a few minor issues I found today:

At the same time, after selecting Built-in Output (on another pc, should have been given another name), the newly selected song “Rainbow in Your Eyes” plays on that output. It is the same playlist.

IOW, there is no instant reset to the newly selected output. What we have done in SoundPimp is to create a “refresh” button that simply brute force resets the whole system when needed, because sometimes the instant changes hangs due to operating system problematics. However, instant change is the normal case via e.g. the Asio4All driver. 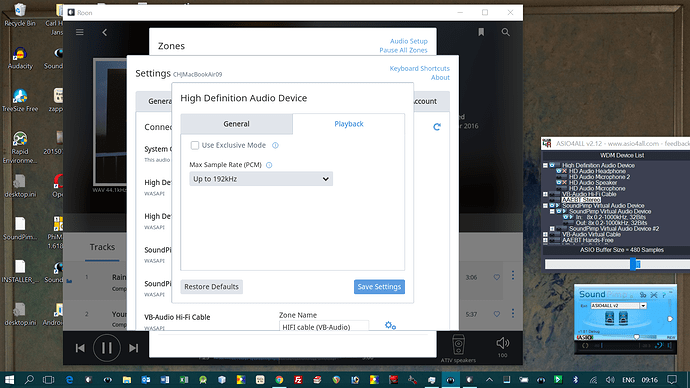 In the second screenshot, another issue. You see the non-exclusive selection of ATIV Speakers in Roon, causing the Asio4All selector ruled by SoundPimp to show that the same device (and the Headphone outlet) is now unavailable, i.e. the two red crosses.

So it seems to be a partly exclusive mode defined in Roon. Correct?

Of course if you went to the queue and used the switch to another output option it would happen immediately.

At the same time, after selecting Built-in Output (on another pc, should have been given another name), the newly selected song “Rainbow in Your Eyes” plays on that output. It is the same playlist.

Are you talking about transferring zones? Or just selecting a different zone?

Selecting a different zone will of course not stop the music in the previous zone. It’s a multi-zone system.

Transferring a zone stops the music in the first zone and plays it further in the second zone, leaving it paused in the first. I’ve never found a use for this latter detail of the functionality, but it’s probably there for a reason.

The User Guide is of assistance with the learning curve. 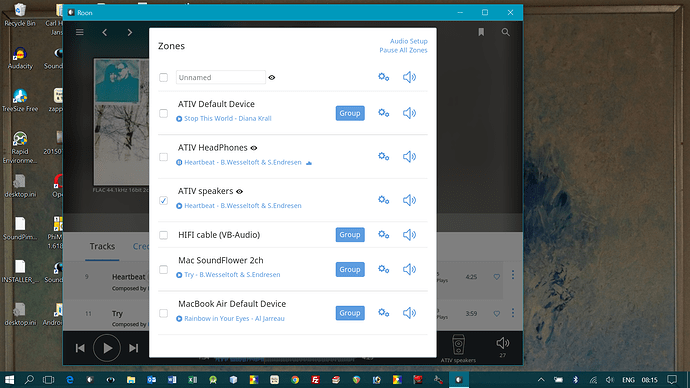 Yesterday it was between zones but I was unaware of that. For that case, I agree with you. Today’s screenshot show that laptop speakers are selected, but the change from the previous selection does not take place. Instead, the audio is sent to the previous selection which was the ATIV Headphones, i.e. the headphone outlet and the speaker outlet of a Samsung ATIV laptop.

Not of course to me. Somehow I unintentionally managed to create several queues. I have not yet been able to click the queue icon, then click the ATIV Speakers icon (on the right of the dashboard), and then select ATIV Headphones. Does not happen. Instead, the other queue is shown in the dashboard.

I am selecting queues indirectly, but automatically by switching audio outlet. To be honest, I am completely confused

User manuals, yes indeed. Agree, but to switch between laptop speakers and headphones is an example of an operation for which I assume a user manual is not strictly necessary. I am in a queue and I want to change outlet. This looks like a two click operation which is good, but, it does not happen. Instead, I switch queue.

It looks like the switching of audio out is the way to switch between queues?

Queues are tied to outputs. Therefore to listen to your queue through a different output, transfer the queue in question to that output. It’s perfectly logical and simple, just the other way round from your concept.

Your requested way round makes sense as a single Roon user but would be utter chaos in a multi-user multi-zone environment. With everything multiplied, you need multiple queues. This is the crucial point.

I have 6 zones and up to three people are using the system simultaneously. They also transfer their queue from room to room sometimes.

@Ludwig, I am sure you will convince me in the end, and I do need to learn more about the zone setup. Appologies if I am too hasty. BUT:

I have defined both speaker and headphone outlets on my Samsung ATIV as private zone, or rather, I think it is likely that Roon did that as a default setting during install (can’t remember).

I understand the principle in your description of zone complexity, and this looks very (very) nice. But why would it be utter chaos in the zone context if I do a superhumble switch from speakers to headphones here in my private zone on the laptop? Nobody would ever be interrupted by that. (I do that e.g. when the family are using “the zone area” for other matters than music, so that the zone is busy from a moral perspective

Further to that, I am absolutely willing to learn myself how to transfer a particular queue from one outlet to another, be it private or not.

Thanks for help from the serviceminded people in the forum.

The queue transfer is a fine solution, even if intuitively, it is not unlikely that more users than me would start to believe that the clickable lower right audio output selector is the way to transer the playing stream to another outlet, in particular since these outlets are checkable. But when you know this is not the way of it, everything is ok, I suppose. What is it used for, anyway, given that audio settings are there to tune each outlet?

The main (uppermost) problem related to exclusive mode or not has not been commented on. Hopefully someone could do that. It could be related to the “locked” headphone out issue.

If you start SoundPimp first, however, and then start Roon, then you can select ATIV Speakers or Headphones in the ASIO4All screen after selecting ATIV Speakers in Roon.

Is the above correct ?

Yes, @andybob correct. As far as I have been able to validate the “situation”. In addition comes that Headphones out continues to be locked even id Roon has been stopped. However, the Headphones are still selectable and the green peakmeter of WIndows/CTRLPanel/Audio/playback is showing activity, but there is no sound on the headphones. It could be ruled out that something else than Roon is the sinner, though, but I find it likely and I shall watchdog this problem.

The issue with “locked” outputs looks like a Roon “brute force” action beyond Windows 10 policy, which is to leave it to the user to select audio out. As far as I know there is no way to change audio out programmatically, for this reason.

The problem is twofold:

E.g. ASIO drivers like ASIO4ALL may not select these devices unless Windows 10 is restarted, which makes this a major issue.

The default sound system of Windows 10 is not affected and may use these outlets regardless of this Roon lock.

This problem only occurs for audio outlets that have been enabled in Roon.

Could be something for the Roon developers to look into (in particular 2 above)?

Screenshot shows that ASIO4ALL may no longer connect to laptop speakers, while an alternative java audio engine selector is unaffected regarding the same output. (Sound not shown :-)) 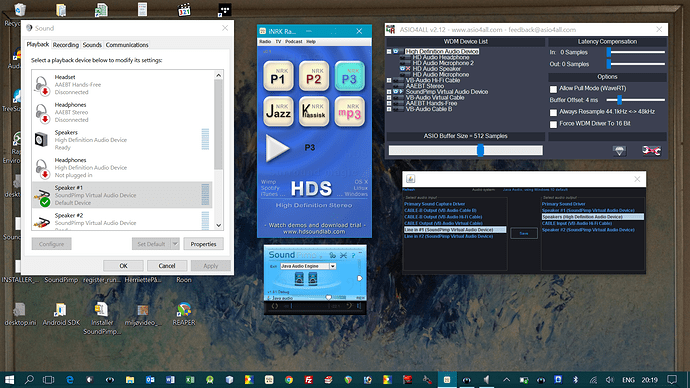 With all due respect: virtual sound devices, ASIO4ALL (which is a messy hack; not an ASIO driver) – I’m afraid there’s not much to be done by Roon here.

FWIW: the ‘lock’ is essential to using a hardware device in exclusive mode. Roon does release the hardware a few seconds after playing is stopped and the signal path disappears. This can also be forced directly by pressing CTRL-T/CMD-T.

Regarding ASIO4ALL it is popular for a reason. It works. Roon is the only audio software I have ever seen that create this dysfunctionality (for ASIO4ALL).

It is messy to create Hi Fi sound systems on an operating system not planned for that. Confirmative.

But as I already stated above somewhere, I am not talking of the situation when Roon utilizes exclusive mode on software or hardware, on the contrary, exclusive mode is unchecked for the context I am talking about.

Thus, there should be no lock. I, the user, deliberately asked for non exclusive usage. If checked, a “lock” is good. It is then a user choice.

@RBM, would you know something about why the uncheck is not working?

I am also NOT talking about hardware, but was giving two examples on working and non working audio software drivers, hence the screenshot for those who need details.

Completely Agree ASIO4ALL is not an ASIO driver and causes way too many problems than it solves actually. I had to nuke it from my system years ago because it caused all sorts of headaches.

The uncheck IS working for everything except ASIO4ALL, no ?

There are other reports of similar behaviour with ASIO4ALL.

@andybob, that’s my point. The answer is no. The uncheck is not working for any outlet (of those I have tried which are all in the private zone of the laptop, i.e. speaker and headphone as well as the SoundPimp virtual audio device, a software audio router utility)

Hey @Rugby, I must suggest that if you would like to “vote down” software from other parties, as you do with ASIO4ALL, that you are extremely specific and pinpointing about your experience, because “all sorts of headaches” is not polite speech, nor is it a reliable statement. My experience with this driver is that it is typically innocent and do absolutely no harm to your computer. I often use this driver instead of native ASIO drivers from the DAC manufacturer.

Moreover, if your context is “Roon only” on your computer, it might be a relevant decision to not use ASIO4ALL, but I am talking about a Windows context on my computer also containing a lot of other stuff, even alternative audio software. In this wider, but perhaps typical context for many Roon users, I am questioning why Roon contains “lock” functionality that is beyond Windows policy. It should not.

Hence, your response is actually diluting my questions. Sorry, but please answer my questions if anything. Thanks.