A system diagram for A Network-Based Computer Audio System

I posted this over on Computer Audiophile based on my own system but was asked to make it more generic showing other possible choices. I thought folks here might also find it useful: 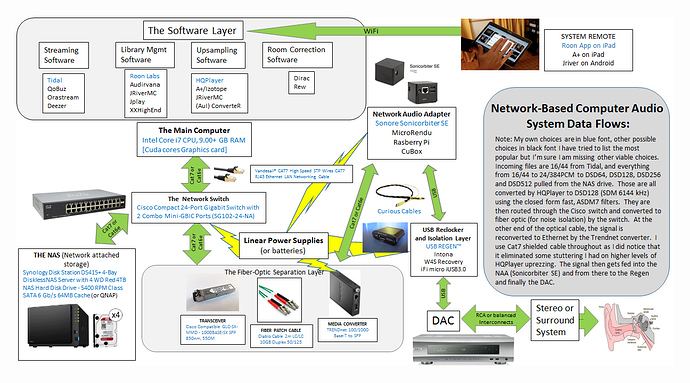 Heath Robinson would be proud of us … “an improbable, rickety machine barely kept going through incessant tinkering”.

For some, tinkering is half the fun! I actually love the opportunity this has given to a bunch of young new entrepreneurial companies that otherwise couldn’t have competed effectively against the big brands (and they are able to do so at price points that don’t resemble high end audio pricing).

This is very similar to what I plan once the microRendu is available as an end point. Very close to what I have now, in any case

Very nice. Glad to see others taking up optical isolation. One of those tweaks that can be tried without breaking the bank.

Only to have it go Ethernet to the endpoint again?

Not only is it going from optical back to Ethernet, but then it goes toi USB before it enters the DAC, but until someone builds a DAC that has optical network inputs and can act like a Network endpoint, I think we are stuck with this configuration. Although I was personally skeptical that I would hear a benefit from adding the optical bridge, I have listened to the system with it in and out several times and there is a slight but noticeable difference.

My optical implementation does not have any copper Ethernet. I use SFP PCIe cards into both my computers (Control and Audio) and the use of an optical switch. However, as Stephan mentioned DAC’s do not have optical network inputs so the system will not be 100% isolated. That said, I’ve found NAS storage in particular to be inherently “noisy” (compared to internal drives) so optical conversion between NAS and DAC has provided SQ benefit worth the modest expenditure.

Scott: In your view, how important is it to remove any noise created by the computer or the NAS as close as possible to the source, rather than just putting an optical bridge in for the last step. Secondly, how are you powering the SFP PCIe cards in your computers in order to avoid any noise leaking from the computer’s power supply into the conversion process?

Lastly, has anyone tried to implement a CuBox like NAA solution with an SFP connection (something like the units sold by ClearFog | SolidRun)?

I think they are both important components. My audio PC is a CAPS Pipeline (fanless design with dedicated SOTM USB card with HDPlex Power Supply) and does a much better job than other PC’s I have used in my chain. As an example, while many people swear by the Regen and other USB “helpers”, I have found essentially no benefit using such devices with the CAPS (though they are beneficial when used in my non-CAPS PC’s). However, even with the CAPS I felt that providing optical isolation after the NAS provided audible benefits.

Another piece that added benefits to my system was going with a galvanically isolated digital converter (Mutec MC-3 plus USB). This allows me to forgo USB connection to my DAC (Schiit Yggradil) and go AES. I am of the opinon that while USB is a ubiquitous connection it is likely not optimal for Audio.