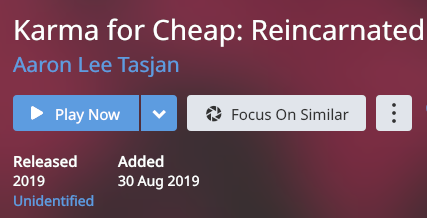 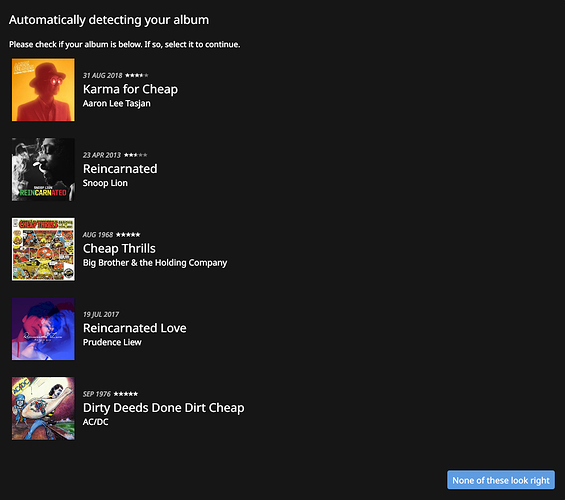 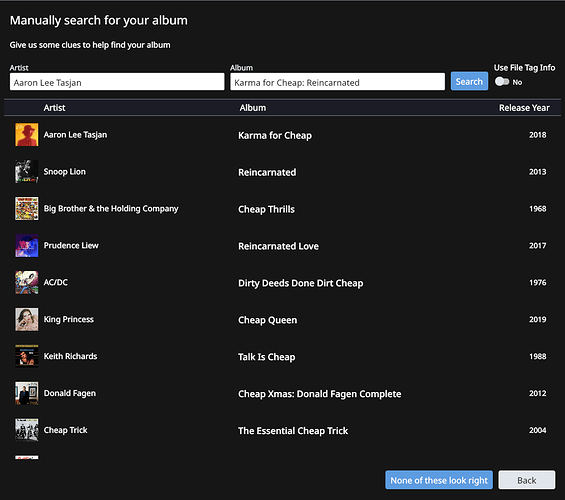 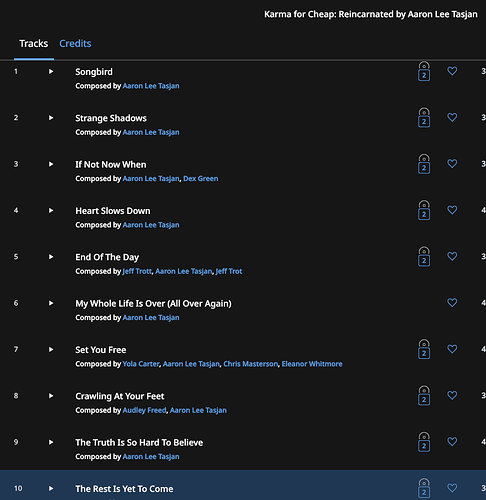 Can you expand on the problem?

Is it not obvious the album is unidentified and unidentifiable in Roon yet it’s been in Musicbrainz since sometime in 2019.

Now you point it out yes. But it’s hard to track someone else’s thoughts with just screen shots and no narrative.

I’ve seen this happen with other albums, never in consistent way that I could report as a bug. Sometimes I can make the right album show up by editing the Artist or Album fields on the “Manually search…” screen, for instance clearing the album name, searching for all of the artist’s albums, and then scanning the list until I find the right album. I don’t know why this happens, maybe a subtle string mismatch, such as different visually confusable Unicode characters? Anyway, it’s worth messing around with the contents of those fields in the search boxes to see if the right album pops up.

Thanks @Fernando_Pereira. I’ve tried all combinations I can muster, no dice.

Would be appreciated if support could look into this.

Hi @Emile_Lemmer, we know what the problem is here and have reached out to our metadata provider to get it corrected. Karma For Cheap: Reincarnated will appear once they have made the correction and we have processed it. Thanks for your patience!

I’ve seen this happen with other albums, never in consistent way that I could report as a bug.

Hi @Fernando_Pereira. That’s because it’s not a bug – per se – on our end, more the result of a conscious design decision. At this time, for a number of good reasons, we are satisfied with the way that the code operates.

In this scenario – “missing releases” – typically what happens is that an album (e.g. Karma For Cheap: Reincarnated) is added mistakenly to the wrong release group (Karma For Cheap) by the metadata provider. There is very limited metadata for this release – no tracks and no cover art – and if there had been, I doubt the mistake would have been made. However, there is a Unique Product Code on the release and this is pulling the MusicBrainz, TIDAL, and Qobuz releases of Reincarnated into the wrong release group, where they become “invisible”.

This situation is actually fairly rare, but when it does happen we can get it fixed quite quickly.

FYI, this particular release is specific to the European market and so does not show up on allmusic.com.

Hi @Emile_Lemmer. Our metadata provider let us know that they have made the requested change. Please allow up to a week for the metadata to reach us and make its way into your library. Thanks.