so in allmusic we have 11 releases.
(against 75 in discogs
https://www.discogs.com/it/The-Mothers-Of-Invention-Absolutely-Free/master/36721)

while in roon, trying to identify my album i only get 6 possibilities

the problem is that non of them is the correct one.
but the correct one is present in allmusic.
and as i have 2 versions of the album… i’d like to match in the exact way.

Only a guess but although AlMusic has 11 releases, only 7 have album art and only six have the same album art - https://www.allmusic.com/album/absolutely-free-mw0000198347/releases

So I wonder if Roon discounts the 5 with no/different cover.

no. the roon missing realease (one of them) is the 1995 rykodisc remaster.
and that’s present in allmusic, with albumart.

We have some logic in place to ensure that useful metadata from across our many providers is part of the Roon data set. In general, you should assume that you’re browsing Roon metadata, and not a pass-through of every single edition from every single source we use – if we did that some albums would have hundreds of versions to slog through, many with tiny, imperceptible distinctions.

We do have plans to revisit what constitutes a “distinct release” in the future, but this isn’t something we can provide any specific timelines for.

@dylan, thanks.
I understand. and that’s basically one main problem in discogs: lots of releases, some official some not, with metadata present here and there, not always consistent.
(something similar happens in discogs with artists aliases… that can become TOO MANY).

basically, though, in the credits section of an album, you create a misurandestanding:
in fact, i can read there a label, a catalog number and a UPC, and a realease date.
and all these infos are specific to the release.
and i’m not sure, but i think that different releases can have different description too.

besides, different releases can have identical metadata, but could sound differently: that’s the basic reason why one should buy a remastered (or Hi-Res) release.
reissue/remastered (and date of remastering) should be a basic piece of metadata for distinguish various releases. and that’s what is missing (for example) in the FZ album (but the others are in the same situation).

i can say that in the end, 95% of the albums are automatically identified, and i enjoyed the experience even though the release date or the catalog number are wrong.

something different i could say about labels: in fact these have quite an focus in the discover page. but in your merging releases according to metadata you do a sort of filterting of labels…

the roon missing realease (one of them) is the 1995 rykodisc remaster.
and that’s present in allmusic, with albumart.

I have the 1995 Rykodisc remaster and Roon identified it correctly (I verified the track listing). Are you searching under The Mothers of Invention rather than Frank Zappa? Here’s mine: 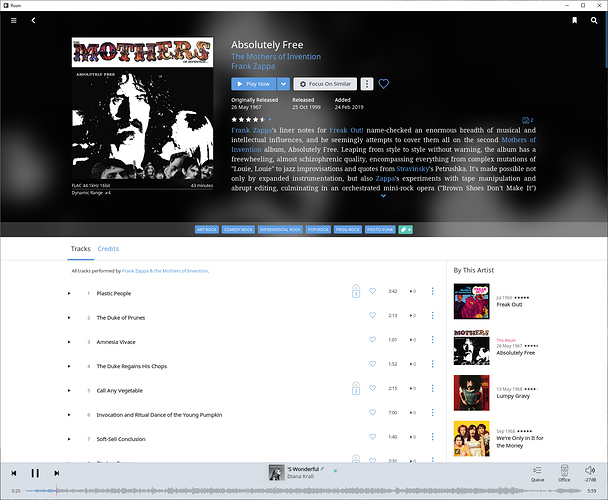 mine is identified too. but with another release (2012), not the ryko 1995
on your screenshot i read “released 1999”. it could be a ryko
on my possible choices this is not present.
and yes, i’ve tried to search also “the mothers” as artist.

so… i don’t know. i’ve learned that roon is really quite sensible and have different results according to the user… but…