Accessing roon library from another computer on the network [Resolved - Firewall]

My Windows 10 desktop in my study is my core, controlling music files located on a NAS. I want to use a tablet running Windows 10 to plug into various hi fi systems throughout my house and stream music to them using my Roon library. I have tried loading Roon as a remote on the tablet and installed Roon bridge on the tablet but when I try to play a track from the library on the tablet, it starts playing through the desktop computer speakers instead and the Audio option on the tablet only shows the desktop audio connections. To get around this, I’ve had to make the tablet the core so that I can play my music through whatever hi fi system it is attached to. I’ve been using JRiver Media Center to stream music to this tablet for years - why can’t I do this using Roon?

You don’t need to install Roon Bridge on your Windows 10 tablet - only Roon. I suspect that this is what is causing the issue. You also need to select the relevant audio zone to play through as well.

As an example, here’s what I see when I look at the Audio settings on my Windows 10 tablet: 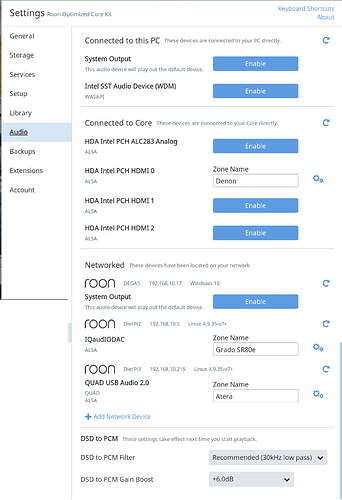 Because I use the tablet purely as a Roon control device, I haven’t enabled any audio outputs on the tablet itself (the “Connected to this PC”) section.

Following that are the audio devices connected to my Roon Core - I have a multichannel HDMI connection to my surround sound AVR here.

Then I have two other networked zones enabled.

If you’re not seeing something similar on your tablet, try uninstalling the Roon Bridge component.

PS. I’ve moved this thread to the Support category, and have flagged support for you with this: @support. Let us know how you get on.

Thanks for the prompt response. I have reinstalled Roon onto my Windows 10 desktop PC in the study (core) and a Windows 10 laptop/tablet (remote). The laptop is the device I plug into various hifi systems around the house. As shown below, I don’t get the options shown on your example under “Connected to this PC” and the only zone I can select is the core. So any music I play on the laptop is heard in the study instead of through the hifi system in the mancave to which it is attached. 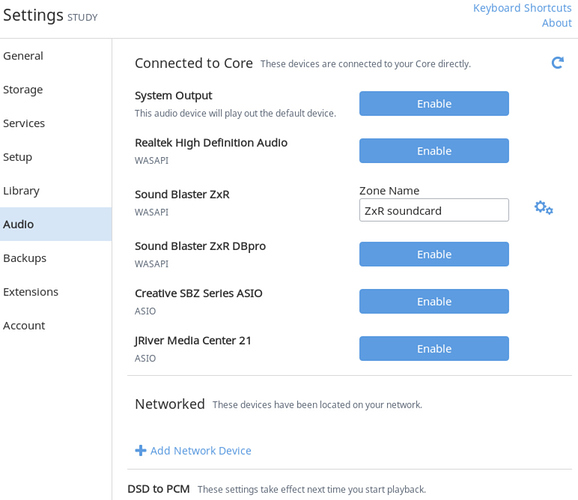 Thanks Rugby. I’m up and running. It was the firewall on the remote device (Vipre security). I’ve now added an exception in the firewall rules to allow RAAT. I had originally only added Roon as an exception to allow it to find the core. Looks like I’ll be subscribing after the trial period. The feature that has attracted me away from JRiver Media Centre was Tidal integration into the library.

Great to hear! Enjoy the Music!