Thanks for this - it lead me read up for the last couple of hrs on what the Chord is doing. Good advice. It appears that not many send upscaled sources into Chord DACs. I think I will still need to use Windows though to send native DSD to the Chord (default signal)

You’ll be able to use DSD over PCM (DoP) on an RPi–the resulting DSD data stream is completely unchanged–and possibly direct DSD via USB (needs ALSA support for the Qutest in the kernel.)

From my original post my planned set up has changed slightly. I am going to move the core to the main listening area and connect it directly to the DAC to avoid network to the ‘main’ endpoint. RPi everywhere else running Roon Bridge.
I am ordering the Qutest this weekend and will then either go down the Nucleus, ROCK built or fanless mini-itx W10 route for the core.

I suggest you get the DAC home, enjoy it, and decide what setup is best for you before changing anything else. Use your listening experience to determine if you need a Linux or Windows Core and/ or endpoint. There’s no rush!

Agreed. No rush at all.
I might be getting too hung up on the native DSD anyway - at some point, I expect that ROCK will be developed to include native DSD support for more DACs.

I expect that ROCK will be developed to include native DSD support for more DACs.

I’m sure too. Check the following thread re. DSD and RPi and Ropieee support.

Try DietPi. With Linux native DSD support requires an entry for the DAC in the ALSA section of the kernel. There are also patches that can add entries for DACs to the kernel. If DietPi doesn’t already have your DAC, but you can find a Linux patch for it, then drop Dan Knight a line in the DietPi section of this forum to see if he can add it.

I am going to move the core to the main listening area and connect it directly to the DAC to avoid network to the ‘main’ endpoint.

This is a common rookie mistake. Unless you have a terrible, terrible network, you definitely don’t want to do this. One of the things that makes Roon unique is that all of the “heavy lifting” is done by the core. It then streams to endpoints which basically only have to pass the signal on to the DACs. The core has to be fairly robust and does a lot of intensive processing, while roon bridge will run flawlessly on an RPi in low power mode. This results in a lot of electrical noise being generated by the core. This noise is not transmitted over the network, but does noticeably affect DACs that are connected directly to the core. The endpoints, on the other hand, can be run in low power mode to reduce processor noise and power supply noise, translating into a much cleaner signal to the DAC.

That said, there are some limitations to the network bandwidth of Raspberry Pi 3 devices that can cause problems with USB DACs, but the only time I have experienced this was trying to run two USB DACs off the same RPi (roon volume leveling and DSP to both

). This might also be an issue if you are sending a 512DSD signal, so if you want to run a high resolution USB DAC (via wired network) you could get an Allo Sparky and put DietPi on it. Same price as a Raspberry Pi, but no USB/Ethernet bus bandwidth issues.

If you are in the mood to tinker and you already have a mini-PC in hand, try running the PC version of DietPi and Roon bridge on it. It would likely be much quieter than Windows.

Hi @Andy_Spinks
I am a fan of the Odroid C2. Unlike the RP3, it has separate controllers for ethernet and USB. dietpi / Roon Bridge runs on it.

Good to hear! When I bought my Sparky, I was was also considering the Odroid. At that time, I could get any consensus about which was better. (Both have separate USB & Ethernet busses.) I might have to try out the Odroid for my next endpoint!

s it possible to use multiple hats? For example the Allo DigiOne (signature) icm with the USBridge?

It’s generally only possible to run one HAT (they physically don’t stack), but on Raspberry Pi it is possible to run a HAT and one (or more) USB DACs. I have a Pi3b that has a Boss HAT (for my living room) and two Dragonfly-type USB DACs for two outside zones). However, I don’t really play them all at once.

I should also note that the Sparky will only support one USB DAC at a time.

Thanks.
No major decisions made yet on the Core, just on the Qutest for my main listening room DAC and additional DAC for one of my secondary zones.
What you are saying might explain why the current DAC connected to the Core upstairs has a hard time doing upsampling when in exclusive mode… lots of pops.

As for Windows vs RPi, I had an old PC lying around (laptop) and loaded Roon Bridge on it, then hooked up to a DAC that was bought for the study (a Topping D50). I just managed to get native DSD64 playing - converted from a FLAC 16/44.1 Tidal stream. It sounds incredible. I am blown away. My network bugs out at DSD128 or PCM176.4, but DSD64 sounds so good, I am not sure I will bother switching from powerline to wiring ethernet.

EDIT: Managed to get DSD128 streaming natively, which is about 12Mbps bandwidth. My powerline is getting c70Mbps but was dipping from time to time to around 35Mbps… interestingly on song changes (manual skip) and album changes, there is a big jump to 35ish Mbps for streaming, which is why I think Roon was losing connection for DSD128. Managed to improve the powerline to handle the spikes, it seems.

If you are using a Chord DAC it is pointless to up sample to DSD.
You should up sample to PCM instead because Chord DAC’s is created to make PCM sound best by design.
If I am not mistaken the DSD will be converted back to PCM inside the DAC.

Yep - I learned that from this site regarding Chord DACs.
Qutest is on the way - right now I am listening to native DSD128 through a Topping D50 in the study (it’s a pretty impressive DAC for the price)
The Qutest is going in the listening room and I’ll be feeding it source material without any DSP/upsampling.

I upgraded my powerline network and got a speed jump from 40mbps to 160mbps.
DSD512 now works

Depends on the DAC. Some will work, some not with linux (and derivatives).

I did a complete 180 on DSD and stopped worrying about Windows or Linux compatibility for DSD512.
I got a Qutest and didn’t like it. Tried an x-sabre pro. Didn’t like it. I had been 3 years looking for a DAC and boxed myself in a bit with high reolution requirements.
Ended up auditioning a Schiit Gungnir MB and bought it the next day. Beats everything else I have listened to and was the first DAC that really stood out to me - for my ears only of course. So the long road to my DAC purchase is over. 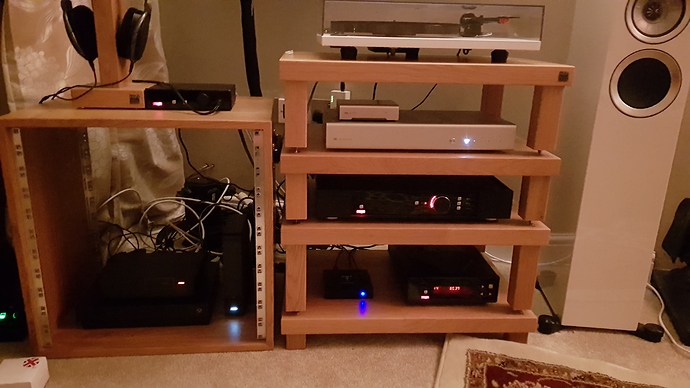 That little box on the bottom shelf is a horrible W10 mini pc - it’s going.
Now I am freed from DSD-itis there are so many more opportunities for endpoints. Metrum Ambre, Moon Neo Mind 2, Bryston…or just a pi.

EDIT - bought the Metrum Ambre. Windows 10 endpoint p*ssed me off one to many times, dropping as part of the update process which can’t work because the mini pc has only a 32Gb drive and update does not have enough space. Moral of the story, cheap W10 endpoints utterly suck.

I like Win10 for all kinds of work, I use it as my main computer. I have three Raspberry pi 3’s with HiFi Berry hats (Raspbian Jessie Lite), and they are awesome. They are on 24-7 (use so little power and generate so little heat I don’t worry about them) and probably the most reliable components in my system. Great sound quality. They are more reliable than the Squeezeboxes they replaced. Roon automatically updates them regularly, I don’t have to think about it. If the power goes out, or if they occasionally drop off the network (for whatever reason) just power cycling them fixes the problem. They come right back up in 10 sec. or so. I’m using one of the read-only linux images so there isn’t a problem with file corruption from power cycling. I’d never get this type of reliablity with a windows machine.

HifiBerry stuff is awesome and just works, for the price cannot be beaten. I have two on 24/7 need no maintenance whatsoever.

I too run many rpi endpoints with ropieee and other than power outages seldom get rebooted, unless I’m aware of a release update that might add something I’m needing. All are lan connected and are mostly the older 3b units that I can push happily at dsd512 all day for those with Dacs that support it. Dietpi is used where I need a little more option like Spotify or airplay to keep swmbo happy.