I created an aggregated audio device in Audio MIDI Setup app in OSX 10.13.3, consisting of a USB DAC and another DAC connected via optical SPDIF, so 4 channel in total.

I created a convolution filter with 4 channels:

Looking at the playback chain, it looks like the filter is working correctly, splitting the stereo stream into 4 channels however, setting the output zone to the aggregate device, the Channel Layout in the settings is grayed out and set to “2.0”. Further down in the playback chain, the sound is down mixed from “quad to 2.0”.
Roon should be able to see there are 4 channels and support a multichannel layout accordingly.

Hi @Peter_van_Rensburg ----- Thank you for the post and sharing your feedback with us. The insight is very appreciated and my apologies for the slow response here.

In regard to the behavior you’ve reported, I have scheduled some testing time with one of our tech team members to see if we can reproduce this issue in house. Once our technician has completed his testing and my report has been updated/passed back I will be sure to share his findings with you ASAP.

Your patience during this process is very appreciated!
-Eric

For more colour, using a Focusrite Scarlett 2i4 device with 2 stereo outputs channels (4 in total as per Audio MIDI Setup) is also stuck in a greyed out “2.0” channel layout.

Hi @Peter_van_Rensburg ---- Thank you for the additional feedback

I wanted to touch because a member of our tech team was able to reproduce this behavior and has since submitted a ticket to our DEV team for evaluation. While I cannot say for certain when this behavior will be addressed by our DEVs, I can however assure you that I will keep you up to date as the team passes along feedback to me.

Any update to this? In theory it should be possible to select a 6 channel aggregate device as a multichannel speaker?

Has there been any progress on this?

I’ve tried to see if I can get Roon working with an OSX aggregate device but have not yet found a way to get it to work. Tried the following …

I also tried, with the above combinations, using the MIX facility in Roon Procedural EQ. Whatever combination I tried the only channels which provided any output were left and right.

So, looks like Roon does not recognise aggregate devices in OSX correctly - or am I doing something wrong?

At this point in time Roon does not recognize multi-device “aggregate devices” in macOS. I’ve included your post in our internal issue tracker – we look over all outstanding tickets for consideration with Roon client releases.

Thanks for the update. Whilst frustrating - looks like this has been a known issue for a long time - it’s good to know that it wasn’t anything that I was doing incorrectly.

I’ve done some more testing and it looks like Roon plays to whichever device is listed first in the OSX Aggregate Device setup. Two examples attached - in both cases Roon plays only on the device at the top of the list.

What doesn’t seem to matter is which device is set to be the clock source - in the two examples the clock source is the same but Roon plays to the first device in the list under Audio Device. 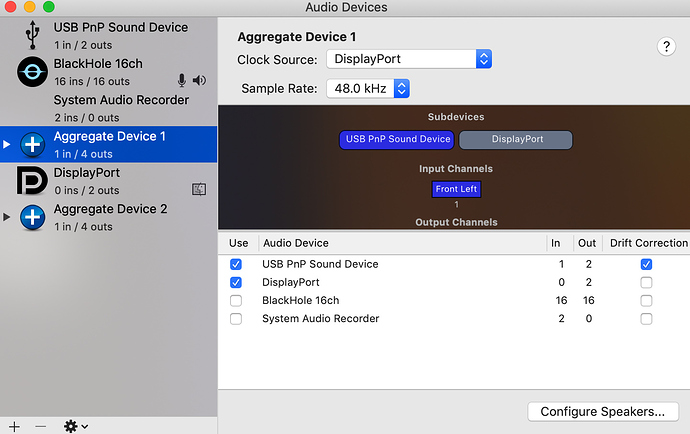 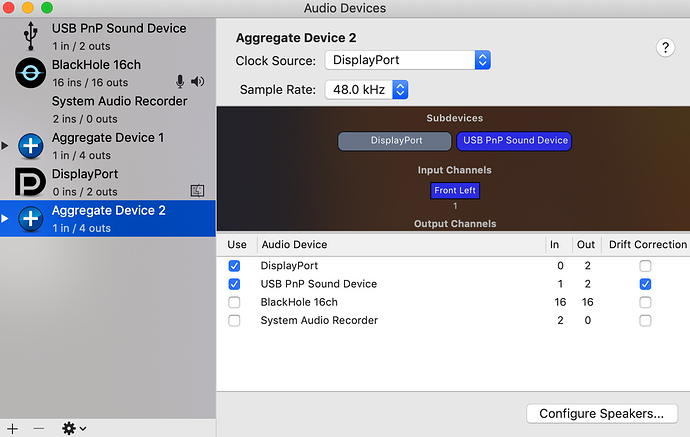 I also did some testing using Loopback (Rogue Amoeba).

This works! As long as there are more than 4 output channels set up then Roon Device Setup offers the option of 5.1 - and when this is selected Roon plays Left to channels 1, Right to channel 2, Center to Channel 3 and LFE to Channel 4. Using Procedural EQ Parametric Filters and/or Convolution Filters can be applied to each channel separately. Screenshot shows Loopback setup I used.

Problem is (a) Loopback costs $115 (including local taxes) and (b) unlike OSX Aggregate Device it doesn’t have any options for setting the Clock Source and Drift Correction. It don’t want to risk spending $115 only to find out that the devices do not stay synchronised.

Frustratingly it looks, from comments made in a number of forums, that JRiver does work with OSX Aggregate Device and allows DSP to be applied to each channel. I love using Roon and would hate to have to use JRiver because of this issue.

At the moment I’m carrying on with using Roon to group the two devices - but my concern there (based on comments a while back by @brian) is that the devices will not be sufficiently synchronised. Would be interesting to know whether the synchronisation issue is any different depending on whether the devices are either (a) both connected by LAN or (b) both connected to by USB

So, hoping that Roon finds a solution SOON!