I had always thought that Airplay was limited to CD quality, as per this link.

However, the screenshot below suggests otherwise. 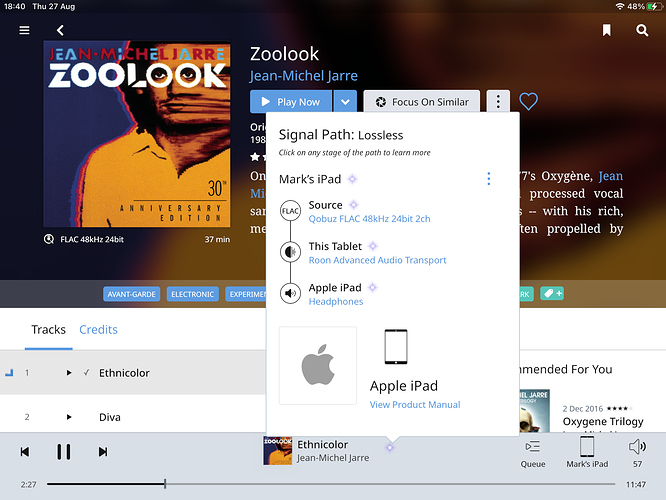 You are not using Airplay. You are using RAAT to an endpoint which supports 24/48 through its built in DAC.
(If you attach a compatible DAC you can see at least DSD256 and PCM384 through the iPad, depending on the DAC’s capabilities, but then you are using the external DAC. And it’s quite a useful endpoint!)

So it is the iPad’s DAC that has the cap of 24bit 48kHz. I just assumed as it was an iPad it would Airplay to it. I guess as I am running the iOS Roon software on the iPad, my core sees it as a valid RAAT capable endpoint, rather than a “dumb” Airplay device.

This is quite an old iPad Air 2… do the latest iPads (or iPad Pros) have a similar limit in the DACs?

If so, maybe time for one of those Cobalt DACs…

Yep, no fancy DACs in the iPads unfortunately. Still, i must say my Pro 12.9” sounds pretty darn good with most ’phones i’ve tried. (Within the 24/48 limit)