Quite surprised to see the shiny purple dot when listening on my Apple TV. Does this mean AirPlay can be considered lossless up to 16/44, as long as the device doesn’t then mangle it to 16/48? (Checked the Apple TV, at least is outputting 16/48 over HDMI and optical. Still sounds very nice regardless.)

Do you have a screenshot showing your experience? 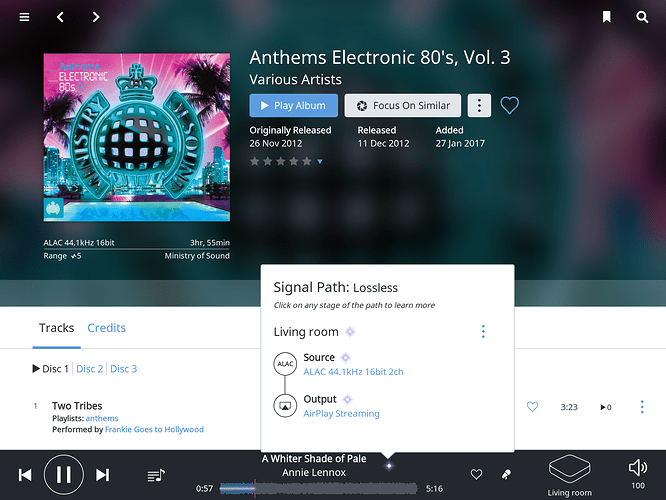 Yes, the ALAC is send lossless to the Apple TV, which on his part, turns it into analogue audio.
So the whole chain from Roon to the Apple TV is lossless.

Nothing is changed until the Apple TV, which upsamples it to 48kHz.

Try a FLAC instead and see what happens. I think it will change the color

Apple TV up/resamples all audio to 48kHz, regardless of how it starts life - my understanding was this, and other uncertainties in the AirPlay protocol were the reasons Roon claassed it as ‘High Quality’ with a green dot (and not ‘Lossless’ with the purple).

All academic of course. The sound is more than fine while I decide whether to go for a Meridian MS600 to replace my Cambridge Audio streamer/DAC. This would, of course, remove the Apple TV from the streaming path.

If you want a cheap endpoint to replace the Apple TV, look into the Raspberry Pi 3.
It supports all the nice parts of the RAAT protocol.

That’s a very good option - and would let me get the best performance out of my current DAC (Cambridge Audio Stream Magic 6) which has an asynchronous USB imput. I’ve just got to be brave enough to buy the kit and put one together!

And man, you are certainly limiting that DAC with the Apple TV.
Curious what Amplifier and Speakers you’ve put behind that DAC.
Guess it isn’t something cheap either

The setup is very easy! If you can handle a small screwdriver and connect cables, you can do it.
The manual supplied on the website of IQAudio is very detailed.

IQAudio has some nice digital output boards for adding to your setup, so you can use your DAC to the full potential.

Also, it may be worthwhile to push to Cambridge Audio to support Roon in their next firmware update.

At the end, if you are fully satisfied with the new setup, sell your Apple TV (if you don’t use it for other purposes, like Plex) and it won’t even cost you a thing.

For the record - slightly unusual as my main system is AV (as you may have guessed from talk of Apple TVs and HDMI) - Yamaha RX-V1067 receiver and B&W 804s. So, not workaday but maybe not what you would call high end.

I plugged the laptop running Roon Server into the USB and there was a useful lift in performance, but i don’t want a PC/laptop in the lounge.

Cambridge Audio support for Roon would be lovely (their app is truly woeful - no search or any intelligence about your collection - basic navigation only) and I may make a visit to their support site (or Facebook page). In the medium term though I’m keeping an eye on Meridian, as I’d love to own some of their kit again. It was idly looking at the Meridian users’ forum for information on Sooloos that led me to Roon.

No, nothing changed except for the indicator color (by mistake, during the integration work for DSP Engine).

On some devices it may be lossless, on others it is mangled by sample rate conversion or software volume controls. Both are common enough in the AirPlay ecosystem that we don’t feel that making a representation about it being lossless isn’t appropriate because we have no way to know for sure.

The mistake will be reverted in the next build.

Thanks, Brian. Don’t you just hate it when someone spots something you were hoping would go under the radar?