I’m using Roon to reach a Marantz Pre/Pro, the 8200A. It works, but both the Roon Core and the Marantz are on a wired Ethernet. The iPad I’m running Roon Remote on is connected to the same network. My only choice in connecting to the Marantz is Airplay. Can’t I use the wired Ethernet to do that, and connect to the Roon Core through the WiFi?

I am not sure if I completely understand your question.
Airplay can also be used with ethernet connected devices.
You should be able to connect with your iPad through WiFi to your RoonCore and play audio over ethernet to your Marantz (if it is already registered in the audio settings tab as an airplay output).

Christopher, many thanks. That assurance is welcome, but how do I do make sure Roon is using the (wireless) network on the iPad remote? (The Marantz has Airplay, but is also plugged into the same local network.) I seem to be connected only through Airplay, which I never use since most of our apartment is hardwired for the Internet and in addition has with three wireless hot spots (because of the steel studs in the walls).

I’m reasonably computer literate and have set up most of this stuff myself, but see no way to set up Roon for the Ethernet.

I have a Marantz with no wifi capability – wired Ethernet only. I use Airplay to send music to it from the Roon Remote app on my iPhone and from Roon or iTunes on my PC. Airplay isn’t just done over wifi, it works through wired Ethernet as well.

Ah. Well, hell. Why can’t I see how to setup my rig that way? Did you do anything in the setup to tell Roon or Airplay to use the wired Internet? Anyway, it’s a BIG help to know that I can do that.

ok. I think I know what you are trying to achieve. But I am unsure if you are completely aware of the airplay concept.
Let’s just start from the beginning.
All your devices (Marantz, RoonCore and iPad) are in the same network (even though the iPad uses a wireless connection). This is a requirement.

Let’s leave Roon out for a moment: Are you able to use Airplay to stream music from your iPad to the marantz (for example if you watch a youtube video or play something in iTunes)?

If that works, check if the Marantz is set-up as an Airplay output in the Roon audio settings: 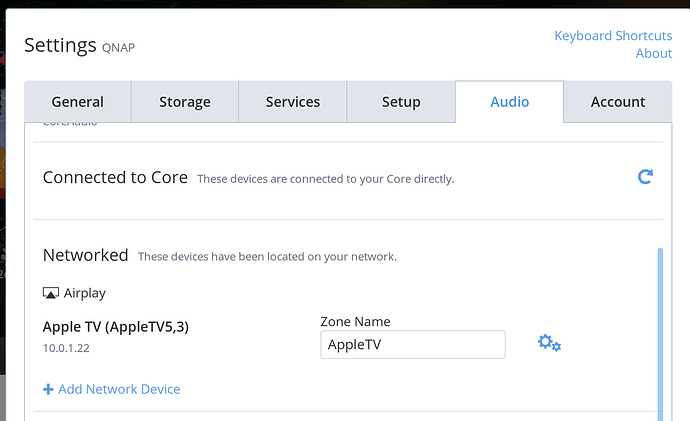 In my settings you see the AppleTV as an Airplay device. You should see there (hopefully) the Marantz. If there is an “enable” button next to it, the Marantz was not enabled yet for RoonServer. Please do so.

When using your iPad, it should connect (wirelessly) to the Roon Server (or core). As the Marantz is registered as an output you should be able to select it in the Roon Remote as an output. You can set the output in the bottom right corner next to the volume icon. Do not enable Airplay on your iPad over control center: The iPad is not streaming the music! In case of Roon, it is just a remote and will tell Roon Server to stream to your Marantz.

Airplay has nothing to do with wireless or wired. It is a protocol that can be used (wired or wireless) to stream audio in your local network.

IMHO, Roon should be able to see your Marantz via Ethernet and offer to send Audio via that means…which should then ensure that >16/44 audio streams can be sent

I can see the Marantz from the router AND get the IP address, but that’s exactly what I’m looking for: something that allows me to see and choose Ethernet from either the Marantz or Roon, so far without finding it.

I see the Marantz, however, in the setup page just as Christopher’s screen shot shows it, but no choices there.

Let me play with this tomorrow. All this has been helpful, and I’ll get back to the thread with what I’ve been able to work out.

Did you try the Fing app??..That will tell you if the Marantz is connected via Wifi or Ethernet via the Icon on the left hand side of its Name and IP Address

Were you able to enter the Marantz settings and turn off Wifi??

I did, Ronnie, and I like it. Fing is faster for identifying IP addresses than the browser router interface. I can also get the IP address directly from the setup of the Marantz, of course, and BTW the Marantz is setup to use the hard-wired Internet connection.

Also the iPad is setup to use AirPlay, but not the Marantz. I have a choice of selecting the Marantz or the iPad for AirPlay. I seem to have to select one or the other. That said, the screen that the Marantz displays on the TV seems to indicate that AirPlay is being used.

I’m using my main desktop Mac server for the Roon Core at the moment (I have a music server ordered and on the way) and my main problem is that the iPad can’t find the connection. I’m wondering if it isn’t the Energy Saver function in IOS X on my main Mac that’s giving me problems connecting. I’m going to check this out.

Also, I’m hoping to find out that I can stream higher quality audio than the CD standard 44.1/16 to the Marantz. I’m not sure at the moment how to check this out.

You guys have been very helpful. I’ll keep you posted if I work this out.

OK, Ronnie, here’s the image. Let me know if you can’t see it OK.

Good tip on how to read the quality! I get a green dot and this signal path: The Source is an AIFF file 192Hz 24 bit 2ch; the Sample Rate is converted to 44.1 Hz and it is Truncated from 24 bits to 16 bits; the output is AirPlay streaming (presumably over the hard-wired Ethernet connection). Ugh. Not so good, but it seems to be a limitation of the Marantz, not Roon. When I get my new music server

, this limitation should disappear. I count on it!

As mentioned earlier, Airplay is limited to 16/44, whether via Wifi or Ethernet

Does the manual state the Specs…or does anyone else here know??

From your comment about about Airplay Streaming being used, then Roon doesn’t “know” that it can stream a higher quality to the Marantz via Ethernet…is there anything that can be changed in the Marantz’ settings to allow this??

Roon says it throttles back to 16/44.1 due to the requirements of Marantz. I’ll check this with Marantz, but I don’t see any flexibility in the settings. My guess is that Marantz was assuming that this would be used for Internet music providers with slower speeds. I guess. Airplay is old technology, and generally this Marantz is up-to-date.

Again thanks for the help!

It is not as much Marantz as it is the Airplay protocol, which is limited by design – all traffic is ALAC 44.1/16.

The Airplay limitation has already been mentioned several times above…but the remaining question is whether the Ethernet Connection on the Marantz is limited to Airplay…or if that limitation applies to its Wifi connection ONLY??

The Airplay protocol itself is limited, regardless of connection capabilities (Wifi or Wired). If Marantz were to use RAAT or different protocols, this limitation could be lifted – but not with Airplay.

Understood Rene, but are you saying that you are 100% sure that the Ethernet connection on the Marantz in limited to Airplay…especially when there are many Ethernet devices [pre-RAAT] which are not limited

Sounds interesting. Which way did these devices go? How did they connect to roon?

I wouldn’t know if Marantz supports different protocols (DLNA/UPNP, MPD, etc.). The capabilities of ethernet (and good Wifi environments) surpass the limitations of Airplay for sure, but I don’t think Marantz offers support for other streaming protocols.