March 04, 2020. Asahi Kasei Microdevices Corporation (AKM) has expanded its lineup of premium audio Digital-to-Analog converters (DACs) with the development of a two-chip solution that separates the digital aspect from the analog. While conventional...

I’m not sure if this is the right category for it, but I didn’t find another post about this particular topic. I was wondering if somebody could explain if what they’re talking about is significant with regards to sound quality. 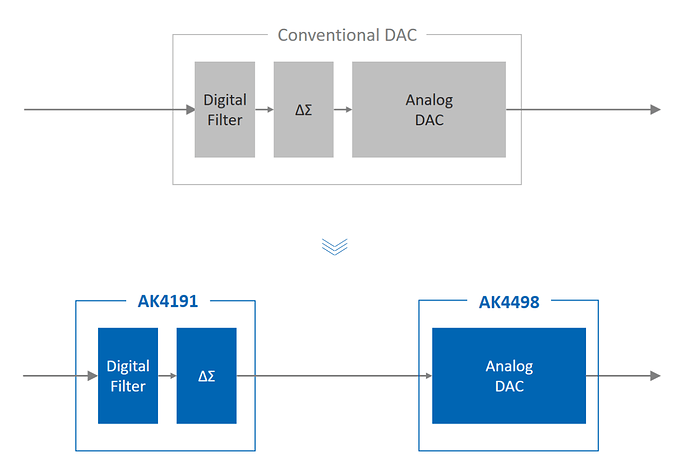 In the graphic, “Analog DAC” is essentially just a conventional analogue low-pass filter. All the “digital stuff” is happening in the digital reconstruction filter and the delta-sigma modulator.

The innovation is to put these on different dies. You can compare the block diagram for the AK4498 with that of its cousin, the AK4499. All the stuff that was stripped off is now on the AK4191.

Whether there’s an actual advantage to using two chips instead of one is an open question. I’m a little perplexed by their statement

This improvement, while not easily quantifiable via traditional measurement techniques, is easily experienced during controlled listening tests.

I’d like to see the ‘non-traditional’ measurements that led them to this particular design.

It almost sounds like they are implementing, in essence, an Upscaler / NOS combo. You have one chip which does the filtering and over-sampling and then feeds the DAC which does nothing but the analog conversion.

Or, I might be completely mis-understanding it, which is highly possible.

Most NOS DACs are R2R. This is still a “conventional” ΔΣ DAC. It’s just that the ΔΣ modulator is on another chip (along with the stuff that does the oversampling and filtering) from the low-pass filter.

This improvement, while not easily quantifiable via traditional measurement techniques, is easily experienced during controlled listening tests

SOtM and Sonore consistently resort to such nonsense, e.g. Reportedly haunted locations: Dowsing is a type of divination employed in attempts to locate ground water, buried metals or ores, gemstones, oil, gravesites, malign 'earth vibrations' and many other objects and materials without the use of a scientific apparatus. Dowsing is considered a pseudoscience and there is no scientific evidence that it is any more effective than random chance. Dowsers often achieve good results because random chance has a high probability of finding water in favourable t...

I just can’t wait to see what the ladies and gents over at ASR make to this. They love AKM chipsets yet if it can’t be measured it doesn’t exist

To me, this is the kind of language used when trying to invent the problem you’re going to use to sell your goods to solve. These guys are meant to be at the forefront of digital; everything is measurable to the nth degree.

Comes down to implementation for sure. Guessing there are ways to implement this with no benefit and ways to implement it where hoards of people will call it the last DAC you’ll ever buy. But, something like this does allow for a new implementation within the D/S space so I’m excited to see what gear we’ll see from it. Will it be better than FPGA, multibit, or R2R? It will be different… some people want different.

Also… if you want to see this digital and analog separation with FPGA based DAC on an extreme, checkout what Ted from PS Audio is working on… the TSS DAC. Two boxes connected via fiber which can be put in separate rooms if you like to keep the digital part away from the analog.

If they are truly objective they’ll get an example in and measure it. Despite the cynicism the fact is AKM’s chips measure immaculately despite the ‘Velvet Sound’ marketing. They won’t take a step backwards here so I expect this to be as good as anything they have produced in the last 5 years.

If they are truly objective they’ll get an example in and measure it.

There are no products, yet, using this new AKM chipset. When there are, I have no doubt that the ASR folks will measure them.

Since AKM cannot put more DSP processing power on the DAC chip, close to the analog parts, they split it into two separate chips in old school way. This is again like it used to be in 1990’s.

Sure it is still nowhere near powerful as a computer doing upsampling, but it is still better than one chip solutions trying to put all on the same die. Of course this will also cost more.

Nice thing is that I can also implement direct support for this separate conversion stage chip straight into HQPlayer. So one could omit the front-end chip completely.

They have also modified the conversion stage itself too.

Also… if you want to see this digital and analog separation with FPGA based DAC on an extreme, checkout what Ted from PS Audio is working on…

If he is the same guy that designed this, then I will be giving it a miss:

This is a review and detailed measurements of the PS Audio PerfectWave DirectStream DAC. It is on kind loan from a member. The unit that I have has the network "bridge" streaming option and costs US $6,899. Without that option it costs US...

Also. included in the review (free of charge), a sideways and much deserved swipe at Stereophile.

My thought about this chip is that it gives you the opportunity to isolate the power supply for the digital and analog portions. That could result in reduced noise. Pure speculation on my part.

I’m curious what you think of Dan’s previous comment about power supplies.

When we see actual products with this chipset, then we’ll know. The noise level is highly dependent on the implementation and we don’t have any actual implementations on which to judge.