Album does not show up in composer view

I have a couple of albums of Arvo Pärt, but one (Miserere) is now showing up in the discography list.

I made a couple of changes to the tags to see if I could get the album identified; e.g. re-identify the album, change the composer tags to the most basic form.

Yes, and it also recognises the Qobuz version of the same album as alternative 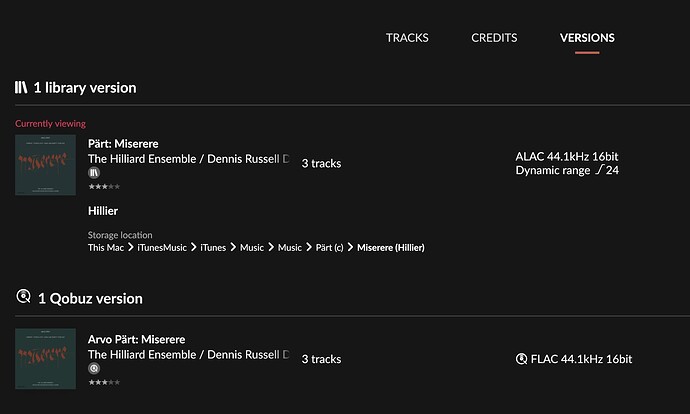 The album does not show up when I select the composer Arvo Pärt. 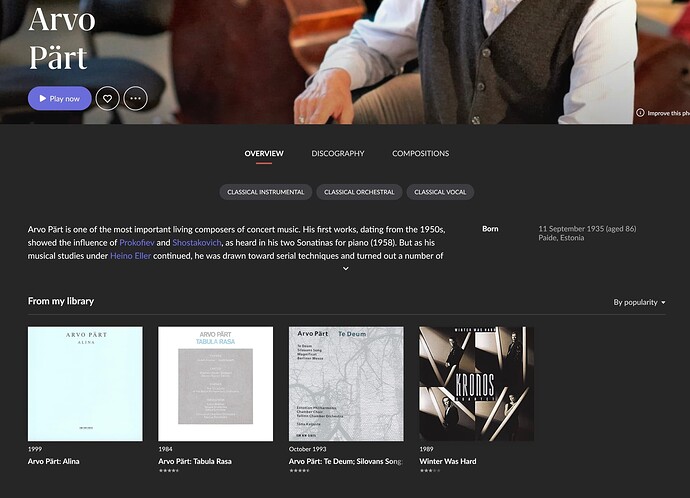 As you can see from the following 2 screen shots, Arvo Pärt is correctly identified as the composer: 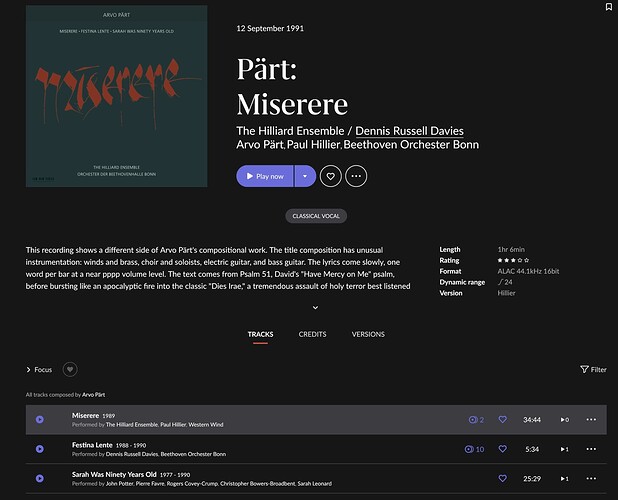 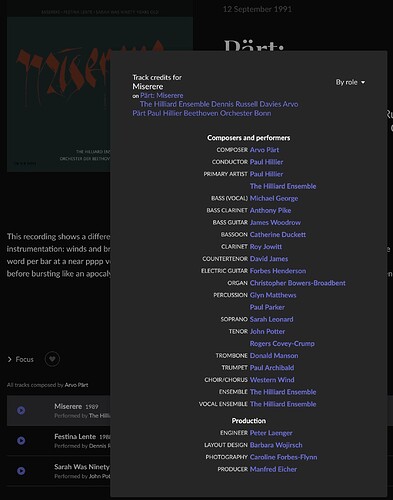 When exporting my library, you can also see the name is correctly identified in the composer field:

I suspect this is a bug, but maybe there is another way to get it recognized?

Interesting, there’s definitely something odd going on. The album shows up as being in my library when I look at the composition, but, as you say, it does not show up in my library list of albums of his works… 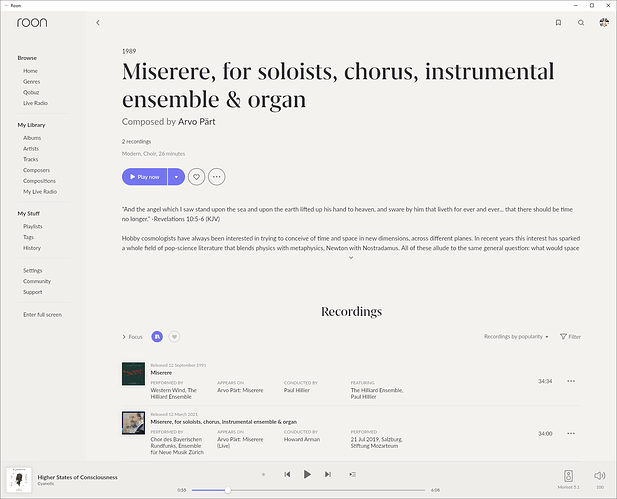 It is not just Arvo Pärt. I find this with other living composers as well.

I just correct on a case by case basis as I notice. I am not keeping records. There are also examples where there are conductor/living composers with album credits for both the performer and the composer so this fix may not work for you. I don’t know why roon treats “performer/composer’s” differently to “composers” in the composer album view. 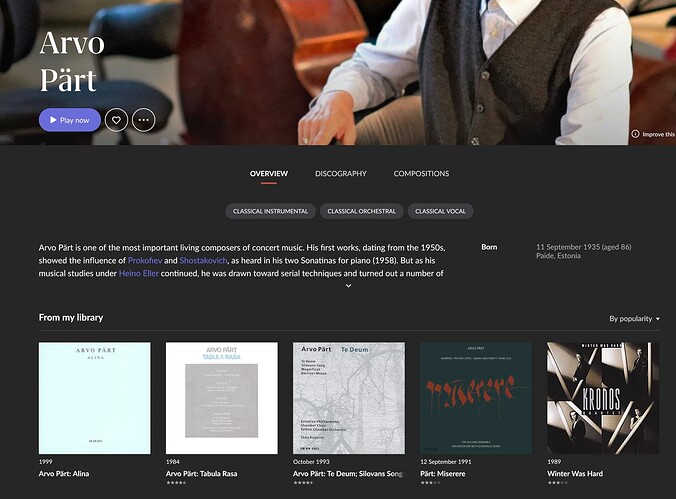 But I assume this ROON behaviour is still a bug; when the (classical) composer is mentioned, the albumt should also be in the album list of the composer.

Well-spotted, @tripleCrotchet - thank you. This seems like a bug to me, but in the meantime, this workaround should be picked up by Roon Labs and added to the Knowledge Base articles… Tagging @support…

Besides that the consolidated album view is an error in my opinion, the album is also not tagged properly. In none of the tracks, Arvo Pärt is NOT a performer. I’ve scanned the notes from the original album.

The original album can be found at the ECM website. I see that at allmusic Pärt is tagged wrongly as a performer, explaining the tagging in ROON.

It’s not the tracks that you need to be looking at, it’s the Album. Pärt is listed as a performer in two places: as a Primary Artist, and as a Performer in the credits - you need to remove him from both entries using Edit Album.

Here, click his name to turn the entry red and then save it: 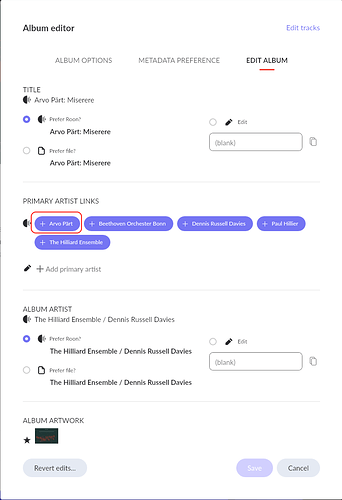 and further down in the Credits section, click the edit credits button, and then clear his entry as performer and click Done: 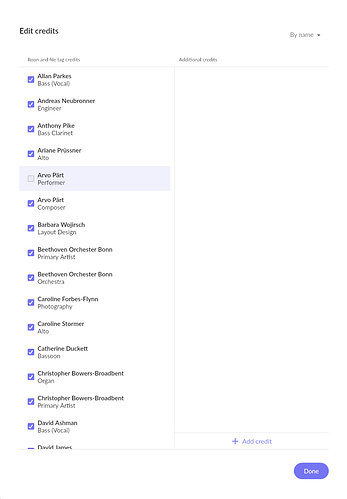 Now the album will show up on the Composer page: 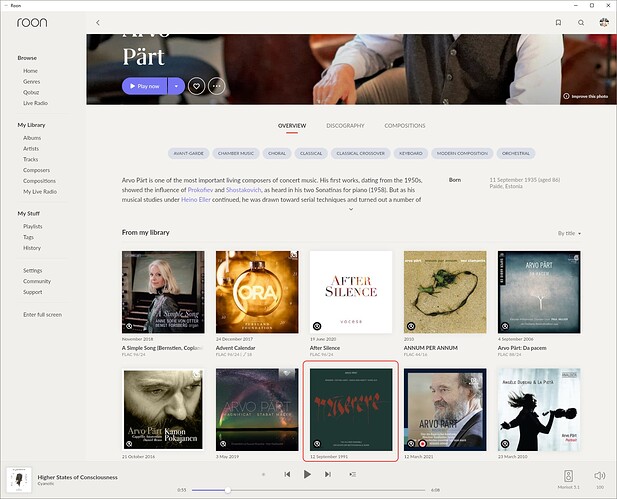 Yes, this is an example where Arvo Pärt was not a performer so the metadata tagging is just plain wrong. It is inconvenient to correct as Geoff details in his post but at least there is a workaround.

But when I listen to Classical, I listen mostly to modern living composers so I see this problem all the time where a living composer is conducting his own work. In these cases where there is both a performer and a composer tag then the tagging is correct. In these cases removing the performer tag just solves the problem with the composer view but creates another problem in performer views. The problem is that in the roon composer album view “performer/composers” should display as well as “composers” unless there is a good reason why they should not. But roon needs to comment on that.

I have another album with a similar issue, that I cannot seem to get resolved with the “removal of the performer” trick. It is about the following album: 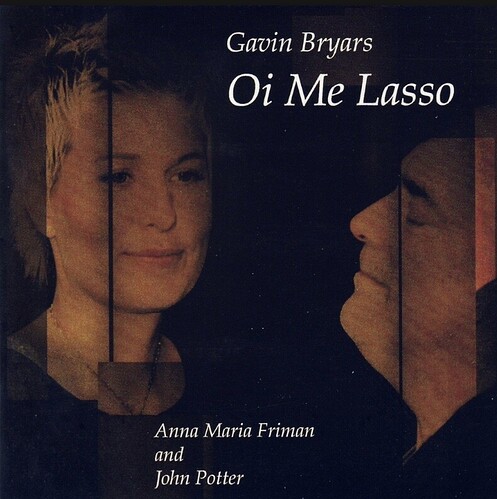 There is not more evidence that Gavin Bryars is both performer as well as composer than in the following screen shot: 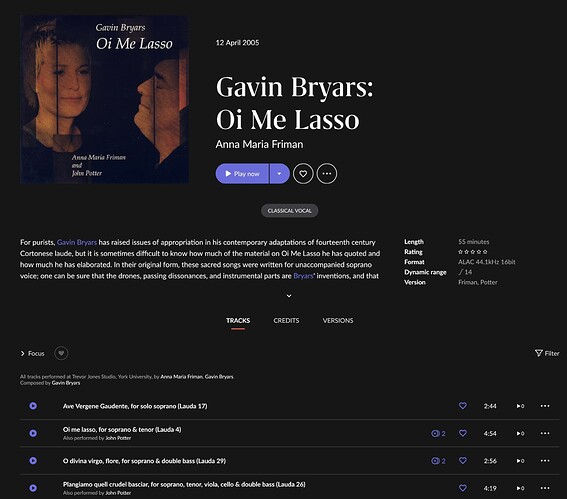 Gavin Bryars doesn’t show up in the composer list:

He is only mentioned as an artist: 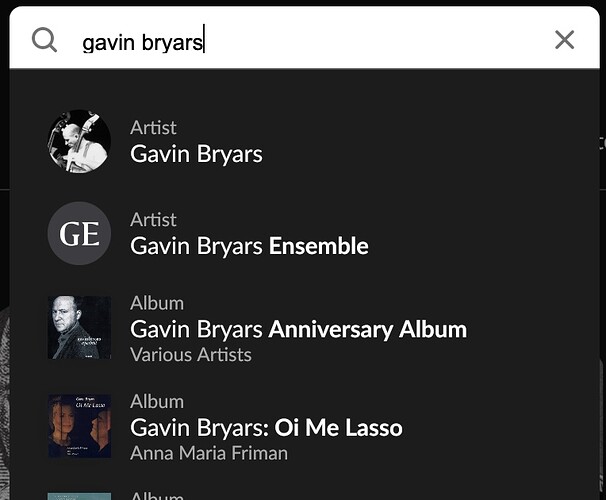 Removing all the performing tags (and more) does not change the situation: 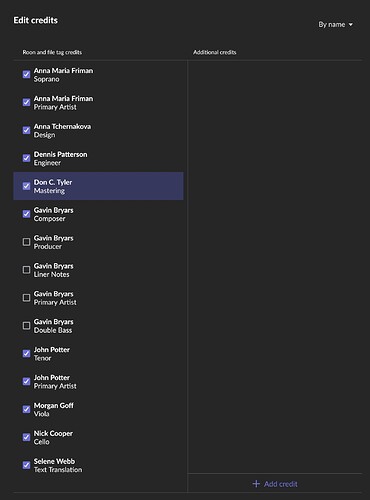 I even removed him from all the tracks on top (select them all, and remove him. It removes him as a performer, but still Bryars does not show up as a composer. 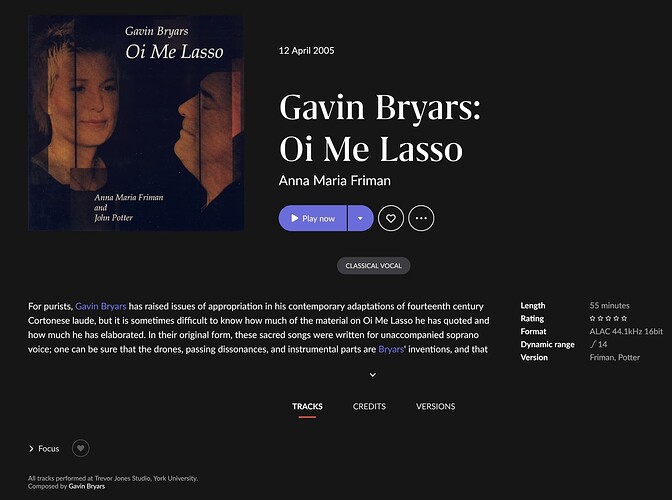 I again assume this is a bug, with no or a cumbersome workaround. Is it recognised, and will it be planned for a fix?

Gavin Bryars doesn’t show up in the composer list:

The header then changes to “My Composers”. 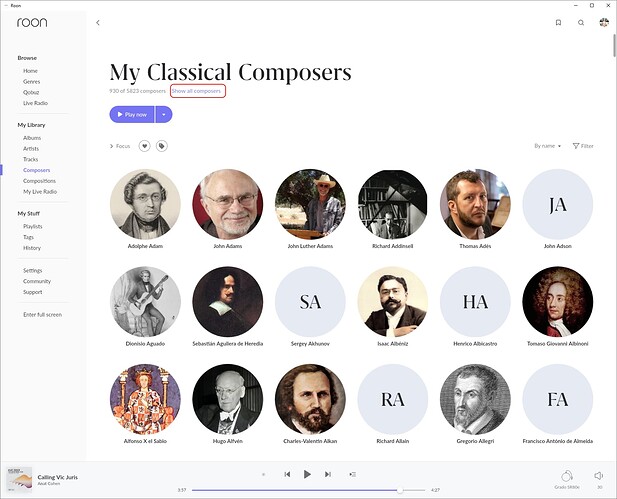 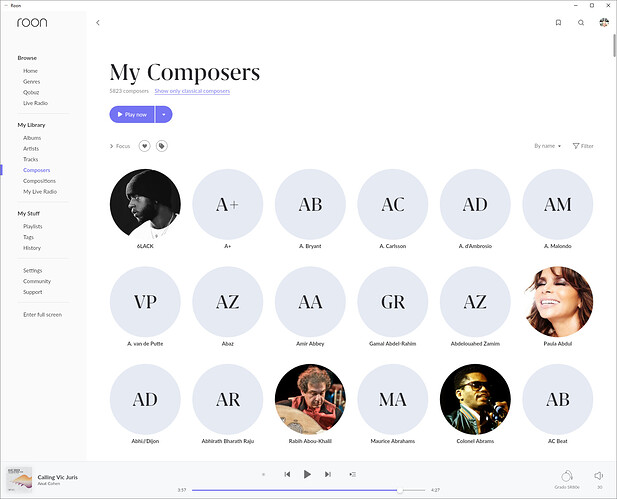 But I would consider him a classical composer in this case. This is also what is indicated at allmusic: 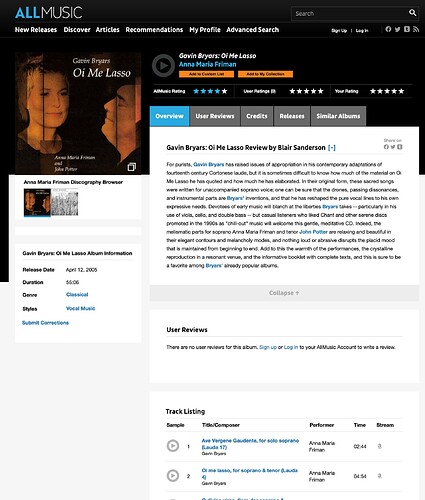 At allmusic, the album is not shown under Gavin Bryars dicography, only under Anna Maria Firman’s discography.

For discogs it seems to be all OK:

View credits, reviews, tracks and shop for the 2005 CD release of "Oi Me Lasso" on Discogs.

Tagging and its interpretation remains some sort of art I guess. I have at least 5 more cases to come.

You can edit the “Classical” status on Gavin Bryers page. If it is set to “no” then you can set it to “yes”. 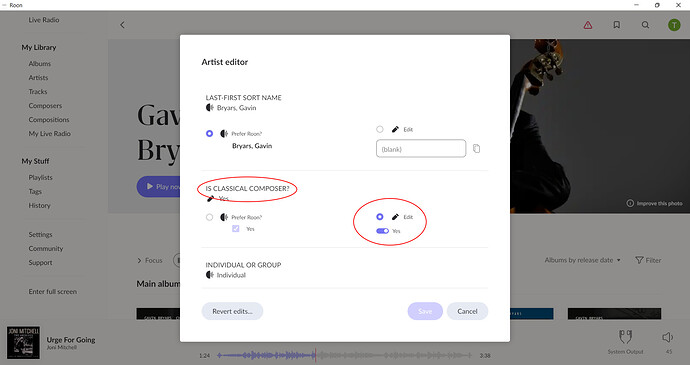 This is also a useful trick in the other direction if you do not like “crossover” composers or certain film composers turning up in Classical searches. Just set “is classical composer” to no.

Unfortunately this is a case where roon is forcing you to choose what is most important to you about Gavin Bryars. His composing or his performing. You may prefer him to show up in both performing and composer views.