Album reviews: signed on Allmusic, but anonymous on Roon

Hi,
I just realized that album reviews shown on Roon are also available on Allmusic, but with an important difference : reviews bear their author’s name on Allmusic, but are anonymous on Roon. For example, here is the review by James Leonard on Allmusic for an album by Andread Scholl : 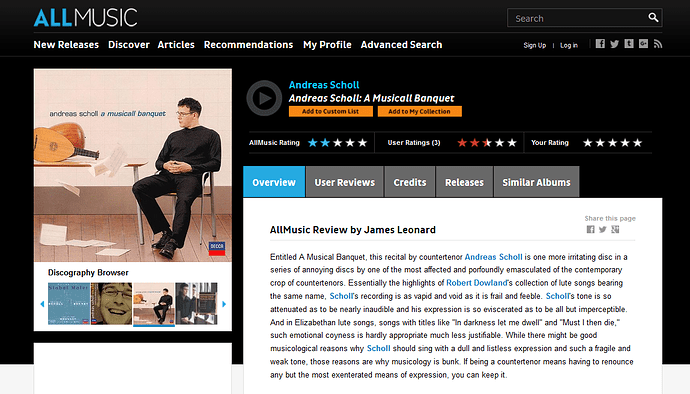 Capture13.PNG1321×612 407 KB
Is this omission by design ? IMHO, I think that reviewer names should be clearly spelled out when shown on Roon. This is especially true for highly opiniated and controversial reviews like this one, which I think do not have their place as THE album review offered by Roon.

I’ve also seen examples of the review credit in AllMusic being dropped. I too find it problematic in several ways.

Yes, but your post above clearly implies that this issue is a global one rather than an exception to the rule

I did the same on my side. I rapidly checked the first 50 albums in my library with a review, and could not find ONE review with the reviewer name identified, whereas the name appears on Allmusic.

My library is however mostly composed of classical music. I do have however some old pop-rock-folk albums which I very rarely access. Surprisingly in those cases, the reviewer names are displayed at the bottom as you say.

The fact that the great majority of my classical albums exhibit this problem explain why I may have given the impression that this was a global issue. I realize that this is not the case for non classical-type albums.

But, IMHO again, I still see this Roon behavior as problematic.

@Andre_Gosselin I think you’ve found a bug. I’ve logged a ticket for myself to sort this out. Thanks for letting us know!

@Joel Any progress on that issue ?

I was wondering about this too. Bizarrely it seems focussed on classical.

Probably a different code path… No, I’ve not got on to this one yet.

I have noticed this too but never thought it an issue as bios and reviews vary so much in quantity and quality. Just tidying up my Dead Can Dance CDs and noticed the CD ‘Wake’ has no name to it. So it certainly is not limited to classical CDs.
Some other CDs don’t even have reviews! Is this the same issue? They are all identified.

Any news about this bug?

Still no news about it ?

@dylan, @noris, et al, will this Bug, which is now 3+ years old eventually receive any attention?? Would certainly be very much appreciated. Many thanks

I too wonder about this frequently.