Album search on artist instead of album title

As one can search on Artist, why can you not search for an Album title, but again have to go by the artist name?
Dirk

Could you explain a little more specifically what you’re trying to do? If I enter an album title in the search field, Roon finds the album.

I am trying to search using the alphabet shortcut, so e.g. trying to find Brothers in Arms from Dire straits, I click on the ABC tap to be able to select the B, I would than expect to be able to select the R and so on.
However, this alphabet tab seems to be linked only to Artists, altough it appears both in Artist view, and in Album view. I had hoped that it’s function would be synced with the actual view.
Dirk

Aha! Yes, it looks like you’re correct, the “ABC” thingamabob appears always to order by artist, regardless of view. You might want to post this as a “Feature Request” in the appropriate section. Note that currently, albums are ordered by artist name, but maybe there could be an option (in Settings > General?) to order albums by album title.

(Personally, I find that finding and filtering are the quickest ways to get to a particular artist or album.)

Hi David
Thanks for your feedback - will check on the Settings.
Dirk

No, it’s not there, AFAIK. I was just speaking in the context of a feature request for the future.

I find the funnel icon in th3 upper right hand corner the best. It acts with the generality of Google (well, almost), it filters down by all the primary artists, not just the album artist, and by album title. Here, the string “vill” found several albums with Village Vanguard, and Nashville Skyline, and Jag Vill Se Min Älskade, but also the band Vaudeville Etiquette. 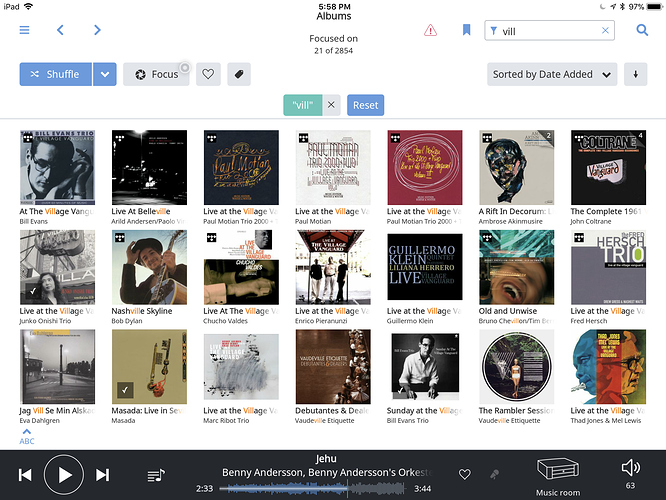 The ABC tab uses the sorting that is selected in the upper right corner. If you set it to ‘Sorted by Album Title’ then you can start typing album titles. Following your example, this is what I got: 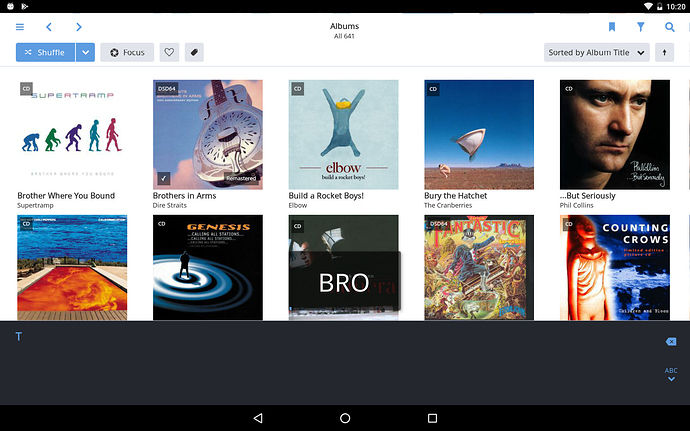 Aha! Yes, it looks like you’re correct, the “ABC” thingamabob appears always to order by artist, regardless of view.

You are right indeed - my mistake, I overlooked to change sort order in “Sorted by Albums”.

Thanks for pointing out!

Thanks also for pointing thius out to me. Much appreciated.

My mistake. You have the right of it.