All Berlin Philharmonics are not the same

small issue here with the image for the Berlin Philharmonic- when listening to Bruckner: Symphony #5 from Qobuz, with Karajan and the BPO, the artist image shows the BPO with Simon Rattle. both were former music directors, neither is now, and Rattle is not the conductor for this particular performance. 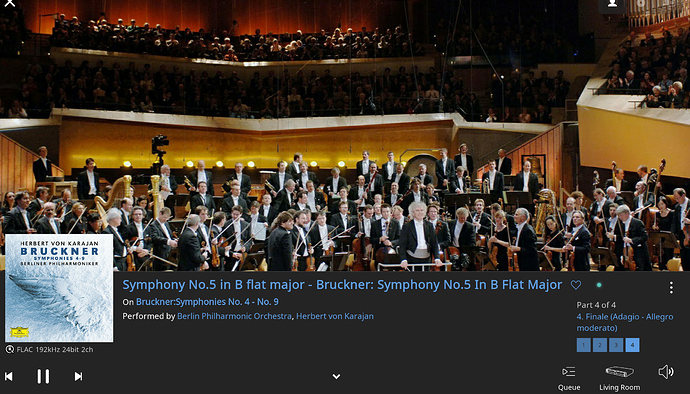 I assume its a generic BPO photo, but if so, it should default to the current music director (Kirill Petrenko), not Rattle, who left a year ago.

Does it really matter?

The artist photos for classical music are a mixed bag, at best. While it would be nice, you’re talking about some next level stuff where the image search for an orchestra would distinguish between particular conductors. I listen to a lot of classical new releases and I’m lucky if the program recognizes one of the associated artists or the ensemble. Long way to go in this regard, assuming anyone is willing to put in the effort. Primephonic is starting to do some neat things with artists and ensembles, btw.

just would like to see classical get some love. it would be like showing a picture of Jason, not John, Bonham while listening to Stairway to Heaven.

This used to be a problem with pop/jazz where I remember several posts pointing out there was often a “temporal” image miss-match between the rock-god of the release and the rock-dad the artist had turned into. It does really rather ruin the effect in genres where image, fashion, time and place etc. are as much part of the experience as the music.

I certainly don’t really notice that so much anymore and where there is still a temporal miss-match (older Bowie / younger Bowie ,for example), I often rather like the elder statesmen of rock type images that are used where there is a long corpus of work. But it isn’t going to work every time, especially if the decline was a bit sad. I assume this issue was at least partially addressed during the last image refresh release for many genres as I personally find it far less noticeable. It still comes up with jazz artists with long careers and many collaborators where there can often be a missmatch between the release and the image of the collaborators the primary artist is playing with. And of course with 100 year old orchestras, the conductors are often miss-matched with the release. This is annoying if you have a lot of versions of favorite works and would like a quick visual queue to which version you are listening to or you are listening to a version you have not heard before on radio and would like to add to library. Would be nice to see some changes here. Long time since classical saw a significant refresh and this just got left behind last time I guess.

not Rattle, who left a year ago.

yes it is time “classical” got some love - the artist pics are amazingly bad in classical - a lot of arms breasts or pixels. Just pretend you like classical music for a while

agreed; although i have yet to form an opinion on Petrenko.