I was just wondering, as you do, whether it would benefit my headphone listening endpoint (which at present is RPi4 USB > Mojo > HD600’s) if I played around with a DigiOne HAT and tried SPDIF for a change? I’ve never had a cable to try Coax SPDIF even when I had the Auralic Mini so I don’t know if the Mojo likes that input. Has anyone any experience with using SPDIF or better still any comparison with USB output to the Mojo?

I use a Chord 2Qute with the Allo DigiOne and S/PDIF using a 75Ω BNC connection. I also have a Mojo but have only used that with USB or iPhone via camera adaptor.

My experience with the DigiOne is very positive, but the improvement over RPi3 USB was marginal IIRC, but it completely eliminated occasional audible clicks and ticks heard from USB.

Since I’ve recently changed speakers I revisited this. There’s little between them–I couldn’t reliably say I preferred one input over the other.

However, the 2Qute has galvanic isolation on the USB input whereas the Mojo does not, so this may make a difference. Unfortunately I don’t have a suitable cable to test the Mojo with the DigiOne.

I was using this one with my DigiOne and Mojo. no issue at all just… don’t remember max resolution the Mojo accepts via S/PDIF: 192 or 384KHz? (Qutest does 384)

Thanks Martin, I’ve got an RPi4 so I think the clicks and pops are no longer an issue over USB? I was actually very surprised when I tried it with my headphones as I usually just use the Mojo from the MacBook USB, the Pi sits in the main system (which shares the Mojo). I decided to have a play and took the Pi into the bedroom and set it up in the headfi rig and it sounded way better than it should, So in typical audiophile fashion I just wondered if the isolated coax from the DigiOne HAT might make it even better? But I think Chord have cracked USB with their DACs and seem quite immune to whatever might be coming down the wire as well as the audio bits.

Rob Watt’s reckons optical into the Mojo sounds best, suppose he would know…he designed it.

Yes I find that worrying

in todays world of DSD and 24bit 192Khz PCM files and streams theToslink interface is all but defunct IMO - I was never able to get my Auralic Mini to output more than 96Khz and to be honest it sounded quite, well, uninspiring. I like the idea of mechanical electrical noise isolation but as soon as I had a DAC that did USB the music just seemed to open up. But of course DAC’s being what they are and transports being what they are another’s milage may vary considerably! 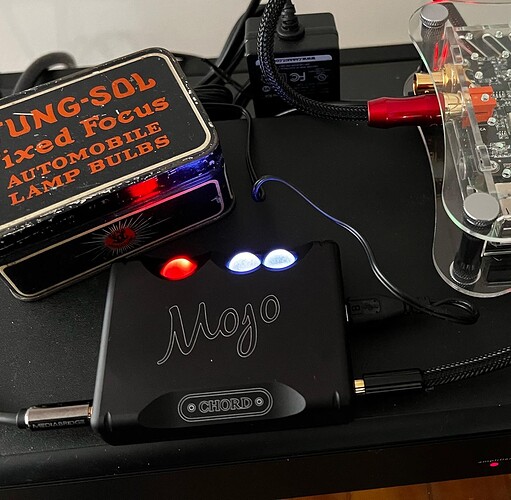