Anyone know how to add metadata info to Roon CD rips

I have ripped hundreds of CDs via a CD drive attached to my Roon Core and it has been successful, with Roon identifying every album. However I notice that the metadata is absent from the rip, the file just is called “CD-Ripped [date]” and the tracks just numbered. Is there a way to recover this missing data? I worry that if Roon ever went away I would have to re-rip these 750 CDs to get the data back.

Yes but having not used dbpoweramp for these rips I was hoping someone may know a way to retrospectively retrieve metadata.

They may have some sort of converter which would pick up the data, I don’t know. I have never come across CDs ripped this way

Using Roon as a CD ripper is not the best way to go because Roon does not write metadata to your files. The information that is missing from the CD rips may be stored in the file someway and just needs to be formatted differently, but I think it is most likely just not there.
Using a more appropriate app like DBpoweramp to rip the CD gives you options on what information to extract from the CD and put on the file including album artwork. So you basically have two choices which is to rip your CDs again, or to use the files you already have and properly tag them using a tag editor. The tag editors can listen to the song, identify it and import the proper tags for it. or you can use their databases to look up your album and download the metadata manually. You can also edit the metadata yourself. I would say that Picard, Mp3 Tag, Yate and SongKong are going to be your best options.

Assuming your tracks are in flac format (maybe you cannot see that, but this would be common sense), you could test maybe Bliss on 1 album - it clamis to be able to find (just like Roon) the metadata on the internet and write it in your file.
No personal experience however
Bliss auto metadata tagging

Before Roon goes away (or you decide to move to another app), just use the Export function to export those ripped files to an external storage location. The Export function will create files and folders using the Album Artist and Album metadata, and add basic metadata to all the files.

Basics Roon's Export feature copies files from your Core to other locations, and "tags' the files as they appear in Roon. Common reasons for using Export include: Copying files so you can take them with you, such as to your laptop for a vacation To...

Here’s an example of the Export function in action…

What do you use to rip? Tinkering

Here’s an example… First, what I see in Roon’s InternalStorage folder: [Roon%201088] I chose 4 of these albums and exported them to a folder on my desktop PC: [Roon%201089] Now Artist folders have been created, and within them, folders for the albums (bearing the Album Title). And further down, in an album folder, the tracks have been given the track title names: [Roon%201090] I sometimes think that discussions around here are like listening to Greek Philosophers arguing about the numbe…

@Geoff_Coupe This is brilliant, and exactly what I need, or potentially need. Thanks so much. Is there a way to select multiple albums do you know, or do you do it one by one?

Yes you can select multiple albums prior to Exporting them.

For example, if you use Roon on a Windows PC, you can select ranges in the Album browser in a similar fashion to using the Windows File Explorer

Once you’ve got your albums selected, click on the 3-dots menu at the top of the screen and select the Export function. 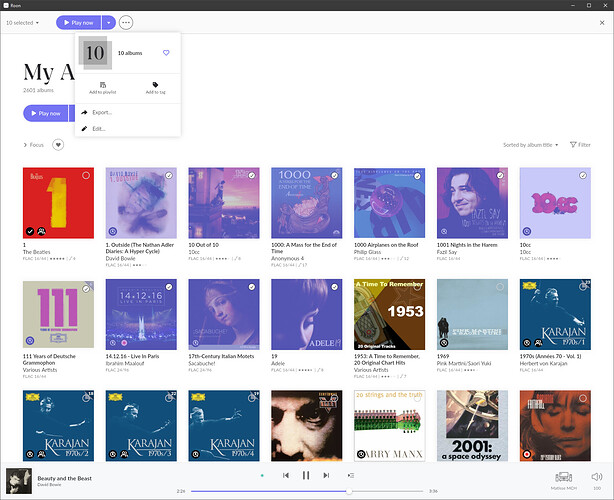 Here’s an example. For illustration, I selected just albums added the last month and identified (I sometimes have recent independent albums that have no metadata yet). The sequence of screenshots shows me selecting the albums, selecting an export destination (this Macbook, which is separate from my Linux core), and the export underway (paused so that I could screenshot it). 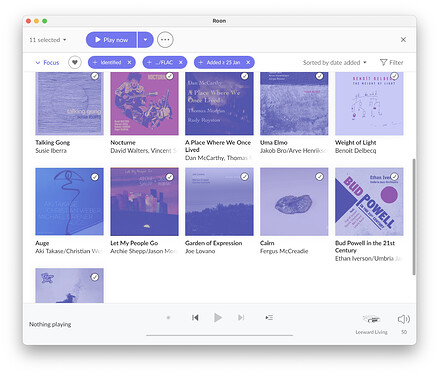 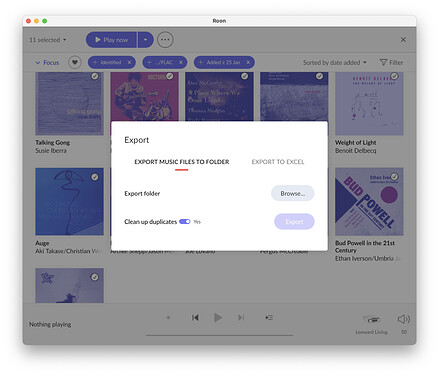 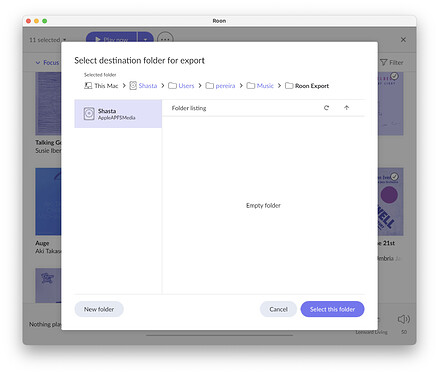 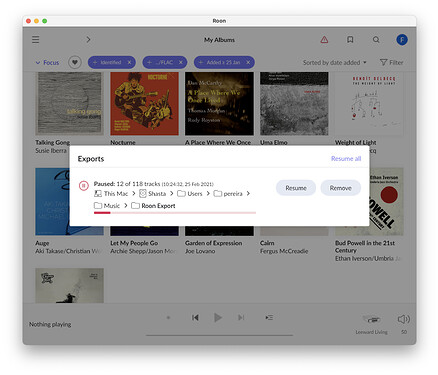 Maybe a dumb question, but in the context of exporting to excel, is it possible to export ones entire library and or would there be any value to doing such a task?

I can think of a couple areas where it might be “nice” to have ones entire DB in an excel file, but in exporting say 5000+ albums, I would think it would cause either roon or excel to puke and it would take forever to do so?

Really? Well if that is the case I’ll test a small sample and see. If its including all the tracks as well this could be useful, thanks.

I ripped in Poweramp and it was perfect. When Roon picks it up it is identified as a different CD.

One option to try is SongKong. It analyses the timings of tracks rather than any textual Album Name etc.

Have a look at ‘mp3tag’ software, you will find a way in it to find the metadata and ad it

Solved using @Geoff_Coupe answer above: export the albums from roon and it applies all the metadata to the files just like dbpoweramp would have.

Just came across this thread whilst looking for a way to add metadata to Roon CD rips. I see the export files option on my pc but not in the iOS app on an iPad. Is it not available on iOS? Thanks.