On iPhone and iPad, we have already enabled lossless in settings, and used the built-in iOS device speaker to play, we could see the Lossless logo in the list of tracks for an album.

However, when we started playback, then brought up the playing screen where you see a larger album art, and only the current playing track name is shown (instead of a list of tracks), for the majority of tracks (e.g. Taylor Swift) we do not see the Lossless logo. I suspect this is a regional thing, or perhaps I did something wrong or missed some simple things.

Look right under the play progress bar and you should see the word “Lossless” or “Dolby Atmos.”

I suspect this is a regional thing, or perhaps I did something wrong or missed some simple things.

Just like the screenshots by Jim_F, but “Lossless” icon in the center is missing.

Device speaker is being used, not AirPlay or Bluetooth.

I take it you have IOS 14.6 installed. If not thats your culprit.

He sees the Lossless and Dolby Atmos options so already has 14.6

Not possible to see these otherwise

I take it you have IOS 14.6 installed. If not thats your culprit.

I’ll verify this next week when I get to test my coworker’s devices at work. Thanks. 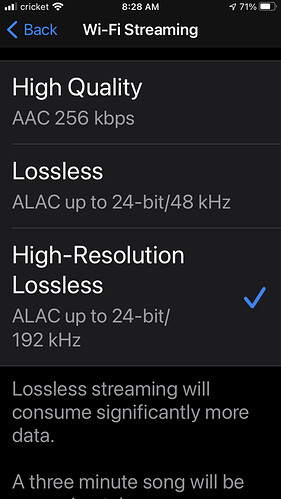 I think that was set too, but I’ll need to double check. Thanks.

…for the majority of tracks (e.g. Taylor Swift) we do not see the Lossless logo.

Question: are you playing back tracks from your ‘local’ collection that was sync’d with Apple Music using iTunes Match (what they called it before Apple Music)?

I have been experimenting with this and discovered that my own, personal library NEVER shows as lossless. In other words, I even deleted an album from my Apple Music library, transcoded a 96/24 album to ALAC, added it back into Apple Music and ran ‘Update Cloud Library…’. It shows in my local Music player as 96/24 and does appear in my iPhone’s Music app; but, I never see the Apple Lossless logo.

The only way to see the lossless badge (anywhere) is to delete the local tracks from your Music app library, then browse for the same on Apple Music, add to your library, then refresh your Cloud Library.

After you do that, you will see the coveted Lossless logo on both the macOS Music app and on your iOS device’s Music app. It’s like the blue light for MQA tracks… Apple knows better than anyone how to make the rat push the button to receive the pellet.

EDIT: and, like a good lab rat, I am sitting here trying to decide if it’s worth the effort to update my entire Apple Music library from matched AAC/256 to Apple Music selections, which I suspect I will need to do by hand. All kidding aside about the logo, I do the vast majority of my music listening now in the car with Apple Music via CarPlay.

Hi all. As someone who has been using Apple Music since day 1 and now the new Losless/ spatial I hope I can answer a few questions.
In your settings for Apple Music , if you enable ATMoS then where an album is ATMOS “enabled” it will display ATMOS on the track - irrespective of also lossless/ Masters.
I am not interested in ATMOS as bulk of listening is not on headphones. So, i have ATMOS turned off. hi-Res turned on.
Then on same Taylor Swift album I get lossless displayed.
Just click on Lossless symbol in track to see bit rate
Here is example for same Taylor Swift 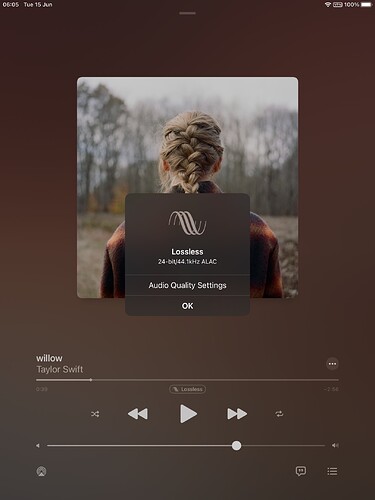 Followed by another example , this time hi-Res from Neil Young in great 24/192 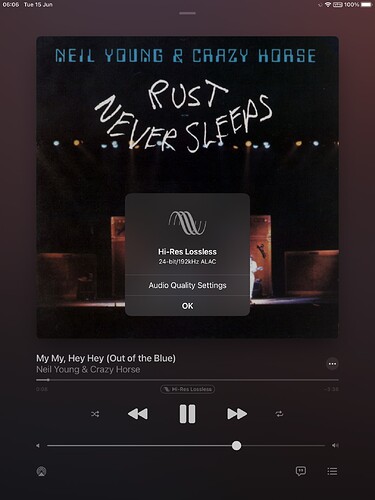 Btw , only way to play higher than 24/48 currently is iPad ( iPhone) with Apple CCK ( lightning to usb cable j into usb of suitable DAC into your amp/ speakers. Does 24/96 and 24/192 sound great ? Yup . Can I tell difference between the 2. Probably not. Can I tell difference between 16/44.1 ( cd quality) and 24/96 well, I would think so.
Thank you Apple but wish you would do a few things - make your music software so people like Roon can access it. Also, bit perfect would be nice and finally, in short term have iOS to iOS control. Be nice to be able to control music on iPad from iPhone so, I did not physically hop up and down from my seat every time I needed to change track ( no, Apple remote does not work )

Finally , yes , you have to manually update ( delete and re enter ) any libraries to take advantage of lossless. I have many and , for now, just leaving them .

Hope this helps for my very first post here .

Thanks for everyone’s input.

Previously the problems I encountered were with coworker’s devices and their accounts.

I did the followings with one of my work iPad and it works for me now (i.e. show Lossless while playing Taylor Swift tracks).

I think you can delete song from apple library on your device and stream from AM.

I’ve seen two bugs.
One is that, after some time, Music will just stop playing lossless, full stop. Quitting the app and restarting has fixed this for me, every time.

The other bug is if it’s an album already in your library. Music likes to stream (or play locally) the wrong version.