Yesterday I decided to switch from Spotify to Apple Music for a number of reasons. I was browsing the jazz category and found ECM playlists. One of the features I like in Apple Music is you can click on the record label and get all of the music from that label. Within the ECM label page I found the category “High-Resolution Masters.” It seems these correlate to the MQA ECM albums I’m seeing in Tidal+Roon. Could this be an initial move by Apple to provide MQA streaming?

I just cancelled my subscription to Apple Music because of the lack of Roon integration and hires files. This could make me rethink that decision if true.

Have you an MQA-enabled DAC you can play the files through? It would confirm whether these are MQA-encoded or not.

Have you an MQA-enabled DAC you can play the files through? It would confirm whether these are MQA-encoded or not

The OP was talking a categorization not actual files.

Within the ECM label page I found the category “High-Resolution Masters.” It seems these correlate to the MQA ECM albums I’m seeing in Tidal+Roon. Could this be an initial move by Apple to provide MQA streaming?

Have you an MQA-enabled DAC you can play the files through? It would confirm whether these are MQA-encoded or not.

I don’t have an MQA DAC; that said, I didn’t think Apple was streaming MQA. I just thought it was interesting they listed High-Resolution Masters in Apple Music’s ECM catalog and that these were the same records available in Tidal as MQA.

I agree a high-resolution master is not MQA and I should have been more clear in my original post as it wasn’t my intent to assign equality. That said, I have seen the marketing use the terms as analogous. For example, Tidal doesn’t refer to the records as MQA…simply as “MASTERS.”

I’d be happy with high-res or MQA streaming from Apple; happier still if it could be integrated into Roon like Tidal.

Can you kindly share screenshots of what you’re seeing in Apple Music? If possible

When I click on ECM Records (link under any of the ECM playlists in the Jazz Genre page) I get to this page: 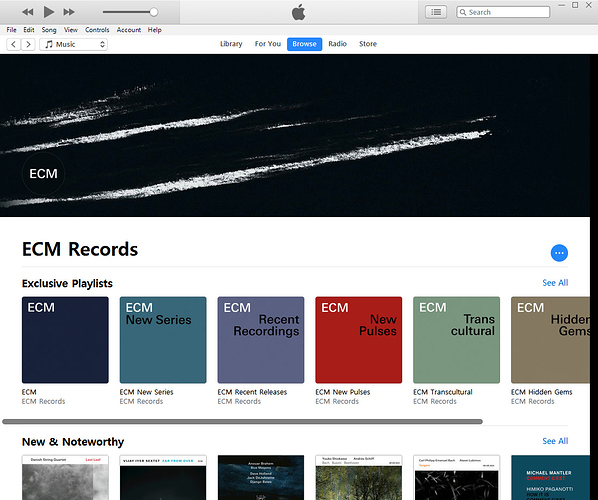 Scrolling down I get this: 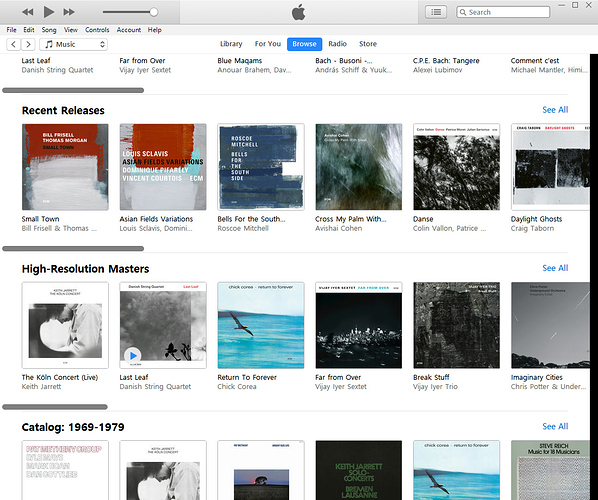 I see it on desktop and in my iPhone app.

Yep and inside that document you also see a section called High Resolution Masters, the same words used in the Apple Music screenshots. 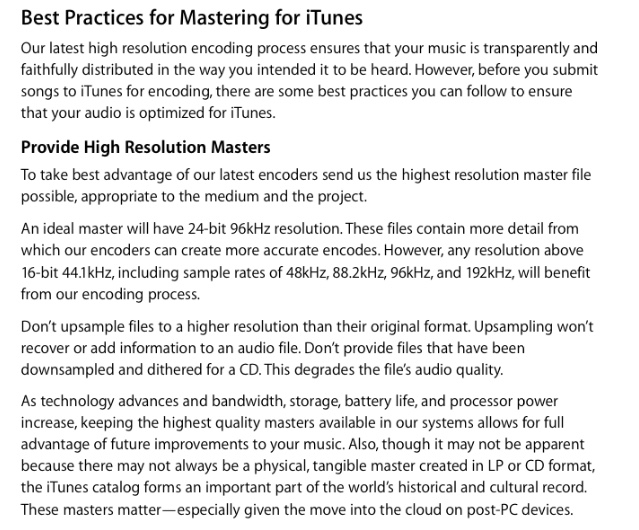 Thanks for the info, looks like nothing new here then. Interesting read on iTunes mastering process though.

And do not be surprised if the 24 bit 44.1/48 kHz high res master delivered to Apple in some cases is the MQA encoded master. Thus, the Mastered for iTunes version could be MQA truncated and folded, then downsampled and lossy AAC 16 bit 44.1 kHz encoded – with no possibility of MQA decoding.

MQA is an end to end process and not something one can convert to another format.

Nah, everything you describe exists in an ideal world. But media mastering and distribution in the real world is far from ideal.

Because of indifference, incompetence, or other reasons, countless CDs, DVDs, BDs over the years have been mastered from less than ideal to downright incorrect sources. Some major label CDs, for but one example, have been shown to be mastered from lossy compressed files, intentionally or not. So, the idealized notion of the high resolution PCM master tape does not always apply. Frankly, anything that serves as the source for a media release can be the so called master tape.

And if 24 bit MQA encoded masters are lying around in the vaults so to speak, they may get repurposed for unintended distribution channels. Count on it.

If that is all MQA is, then it doesn’t live up to what it says it is.

Some major label CDs, for but one example, have been shown to be mastered from lossy compressed files, intentionally or not.

I never come across where CDs from major labels are mastered from lossy format. Why go such a length to add in an additional lossy encoder just to release them on CDs? The Pros will of course store the raw format as archive and storage. Do remember majority of master tapes are multi-tracks recorders, some goes up to 48 tracks, all these are raw and can be edited by DSP consoles and mixed down to 2 channels stereo for distribution. MQA is a lossy format it cannot survive in a DSP environment like raw PCM, therefore it is meant for the final mix down stereo for distribution. One good example is 2L, their original masters are always mastered in DXD, 24 bit 352.8kHz, thus this is converted in various formats like DSD and MQA and so on.

CD’s can often be mastered from what ever is available. World music for instance where master tapes were reused because of the economics of music production. Thus a CD has the anomolies of the vinyl it was lifted off or is copied from a lossy distribution format like mini disk and even MP3.

And then a vinyl version is made from the mp3 based CD. “Back to analog.”