Just found another: John Taylor is a contemplative British jazz piano player, having played with Norma Winstone and Kenny Wheeler, making up Azimuth, etc. ECM stuff. The bio says, “One of the weirdest things about Duran Duran is that every one of its members became a hard rocker.”

John Taylor is of course not a rare name, so something deeper must be done to identify the right one.

Lisa Miller, the Australian singer/songwriter (Car Tapes 1 & 2, Morning in the Bowl of Night, Version Originale ) is misidentified by Roon as Lisa Miller of the Trailer Park Honeys of Portland.

The Australian singer/songwriter Lisa Miller is the vocalist on “I Hope I Never”, track 9 of “She Will Have Her Way; the Songs of Tim and Neil Finn” on Tidal.

My local albums of hers, Car Tape, Version Originale, Car Tape 2 and Meet the Misses along with the above Tidal compilation are attributed by Roon to the USA artist Lisa Miller (Trailer Park Honeys) who has the bio in Roon.

This is the Wikipedia entry of the Australian artist, which has a better discography than her Discogs entry.

The Australian band is mixed up with the Canadian band (which has the bio in Roon). This is the Wikipedia entry and [Discogs entry] (http://www.discogs.com/artist/794228-Harem-Scarem-2) for the Australian band

The third album of the Australian Cybotron (Implosion 1980, Aztec rerelease) is misidentified as the USA Cybotron (formed 1980).

My local copy of the Australian band’s album “Implosion” is attributed to the USA band.

The Australian Band has the bio and album in Roon, but Top Tracks and Appearances reference the 60’s act.

Spectrum - Part One is correctly identified as the release by Aztec and has the right cover art for the Australian band Spectrum: [image] The hyperlink to Spectrum, however is to the Pete Kember electronica project.

Pete Kember (UK Artist) has the bio in Roon, albums for the Australian band are attributed to him.

This is the Wikipedia entry and Discogs entry for the Australian band.

Edit: Now there is a band entry for Spectrum(16) which is the designation for the Australian band on Discogs. But the name of the band is just Spectrum, discogs adds 16 for disambiguation.

The 1970s Jeff Duff led Australian band Kush (Snow White and the Seven Straights, Nah Tellus Wht Kush Means) is being confused with an early noughties US band of the same name.

My local copies of the Australian band albums are attributed to the USA band.

Here are the Allmusic entry for Jeff Duff referring to Kush and the Discogs entry for the Australian band.

My local copy and the Tidal entry for “At Home With You”, the Australian band’s album, are attributed to the LA band (which has the bio in Roon).

Here are the Wikipedia entry and Discogs entry for the Australian band.

There are two musicians named Mark Gillespie The first (who is in Roon) was born 17 November 1970 in the UK and was in Maines Brothers Band. The second is Australian. This is the Discogs info for the Aztec re-issue of his album “Only Human”: Roon currently incorrectly attributes that album to the first Mark Gillespie.

Here is the Discogs entry for the Australian artist.

Chris Wilson, the Australian singer/songwriter (Crown of Thorns and solo) is being confused with the American Chris Wilson (The Barracudas, Flamin’ Groovies).

Local albums for the Australian artist are attributed to the USA artist.

Here are the Wikipedia entry and Discogs entry for the Australian artist.

Thanks guys, this one is vastly improved with an excellent bio by Ed Nimmervoll now matching the pic of the Australian artist in Roon and a beginning of the Sisyphean task of meta-links between Paul and other Australian musicians.

The Tidal sections, however, are blending albums from the Australian artist, the Irish mandolin player and the Miami funk artist.

Nancy Wilson of Heart and Nancy Wilson jazz singer. EDIT: Looks like the bio is now correct, the photo is wrong, though.

Hmmm, Nancy Wilson, jazz singer with Cannonball Adderly has the bio of Nancy Wilson from Heart. Not good.

John Mann (and for that matter, Nancy Wilson) Metadata Issues

Here’s another one. It must be hard to deal with artists of the same name. (last I checked the Nancy Wilson problem still exists.) I have a few albums by a Louisville, KY, Nashville, TN artist named John Mann. Soon has not identified his albums but has associated them with John Mann of Canada. And to make matters worse, Roonnamed him as a featured artist for me drawing attention to it and . . . wait for it . . . giving me Songkick concert dates for the wrong John Mann.

Being able to d…

Ok guys, me and the guys are going to spend an hour or two looking over these and seeing how many fixes we can get done. Hopefully, we can knock out the majority of what’s been reported, and continue doing so on a periodic basis.

A note about these fixes – even once these issues are all cataloged, we still need to go through the database and implement fixes one at a time. The tools we’re using are for internal use only so, unfortunately, for the moment this work has to be done by us.

Once we’ve implemented a fix, it may be another few days before the fix is ingested into the live database that every install of Roon talks to, and it may be a week or more before your local version of Roon grabs all the updated information from our servers.

So the point is, these fixes are coming but will take some time to propagate to your library. If I’ve let you know a fix is coming, give it at least 2 weeks before reporting additional issues, ok?

Hope it’s not to late. The Danish artist Sebastian https://en.wikipedia.org/wiki/Sebastian_(singer) and the French artist SebastiAn http://www.allmusic.com/artist/sebastian-mn0002333618 are mixed together in my library so they apear as the same artist. I can see that its the same problem on Tidal.

Joe Hisaishi (Japanese soundtrack composer) has about half the Albums as Joe Hisaishi and the other half as 久石 譲 (original Japanese format) even if the file tags are all in the same format.

Got an artist problem - Aoife O’Donovan. When I do a search for Aoife, I get two results and if you look closely, the only difference is in the ascii character used for the apostrophe in her last name. 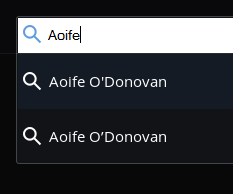 I checked all my tags and folder names, and they are all using the same keyboardable apostrophe. Roon recognizes all 3 of her albums, but only one - Fossils - is connected to one spelling of her name (which has artist bio info). The others are connected to the other apostrophe version which does not have her pic nor bio info. But all 3 albums are identified by Roon.

How do I (can I) fix this? Is this a Roon issue or one on my end somehow? 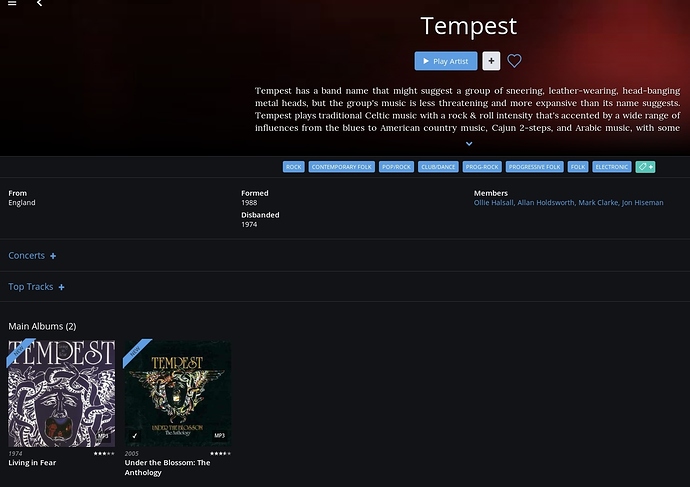